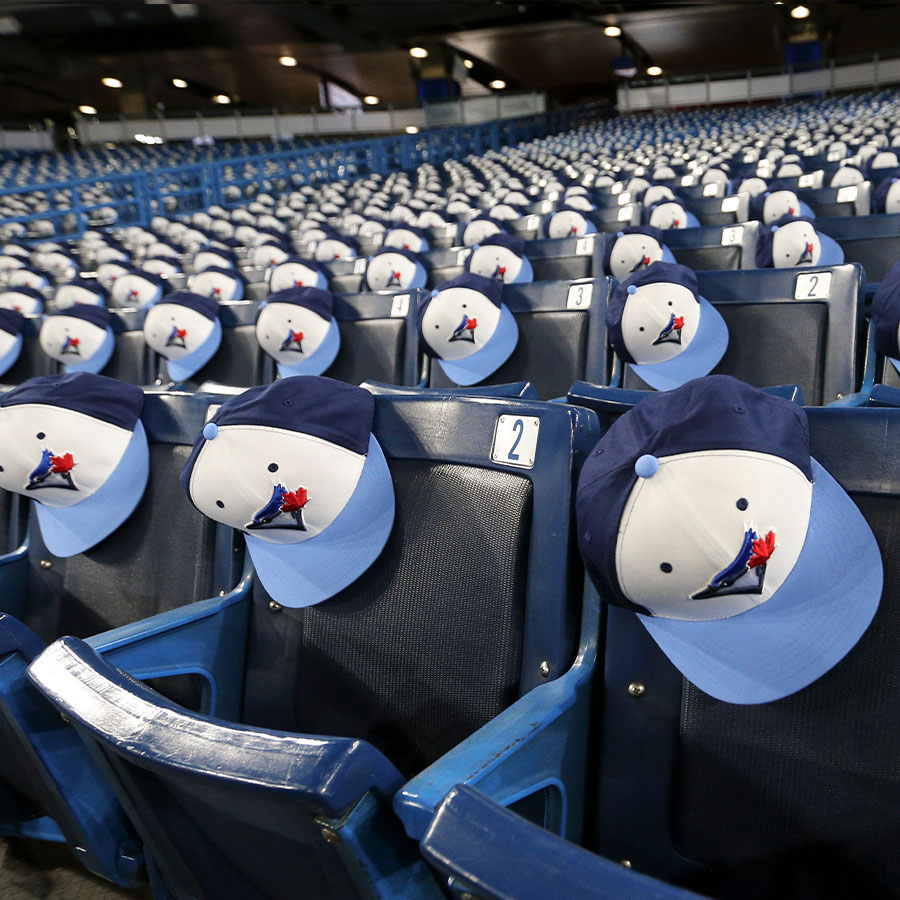 Free hats for all wait on the backs of chairs for the fans to arrive for the Toronto Blue Jays first home opener in years, at the Rogers Centre, April 7 2022. Photo: Richard Lautens/Toronto Star via Getty Images

It seems like years since there’s been this much excitement around a Toronto Blue Jays home opener.

That’s because there hasn’t been a home opener in years, at least not in Toronto. Due to COVID-19 border restrictions, the Jays have opened their last two seasons in the U.S., first in Buffalo, N.Y., and then in Dunedin, Fla., at their spring training facility.

So this year’s first game has added meaning to fans (including Toronto Mayor John Tory) across the country of this exciting young team, which appears ready to make a good run at the post season.

“I can’t wait to see the looks on their faces, to feel the energy in this stadium, and to see the excitement on fans’ faces. It’s something you can feel physically, that level of energy and intensity.” says Jays general manager Russ Atkins, doing a fine job capturing the joyful optimism that turns every baseball home opener into such an event.

The problem with baseball is that the good feelings that pervade during a home opener will quickly dissipate if the team fails to live up to expectations. When hopes are this high, fans and media will not accept anything short of a playoff appearance.

“This is the deepest, strongest Jays team since the veteran club he inherited in 2016, enthuses Toronto Sun sports columnist Steve Simmons. The difference now? This is his team. It’s also his time.” If this team fails, however, you can bet Simmons will be leading the calls for Atkins’ head.

The Jays came so agonizingly close last year, missing out on the playoffs after a loss to the New York Yankees in the final game of the season. But this year should be different.

Armed with a mega-watt personality and playful demeanour, lightening quick bat and superb power, Vladdy has become a folk hero among fans here in Toronto and across the country.

Bichette may not be as flashy as Vladdy, but his hitting and base-running prowess, not to mention his stylish swagger, have won him legions of fans, who appreciate him for many reasons, though not always strictly baseball-related.

This is clearly a team built around its offence. In fact, the only point of serious concern is the starting pitching. Gone from last year is Cy Young award winner Robbie Ray and 14-game winner Steven Matz. Their spots will be taken by the steady but unspectacular starters, Kevin Gausman and Yusei Kikuchi.

But even if the staring pitchers falter, Montoyo has a veteran bullpen laden with quality arms he can call on to extinguish a threat.

But let’s not get too far ahead of ourselves. The season is long and there will be plenty of time to dissect and worry about the team’s failings. Today, it’s opening day, Baseball is back and that’s all that really matters.