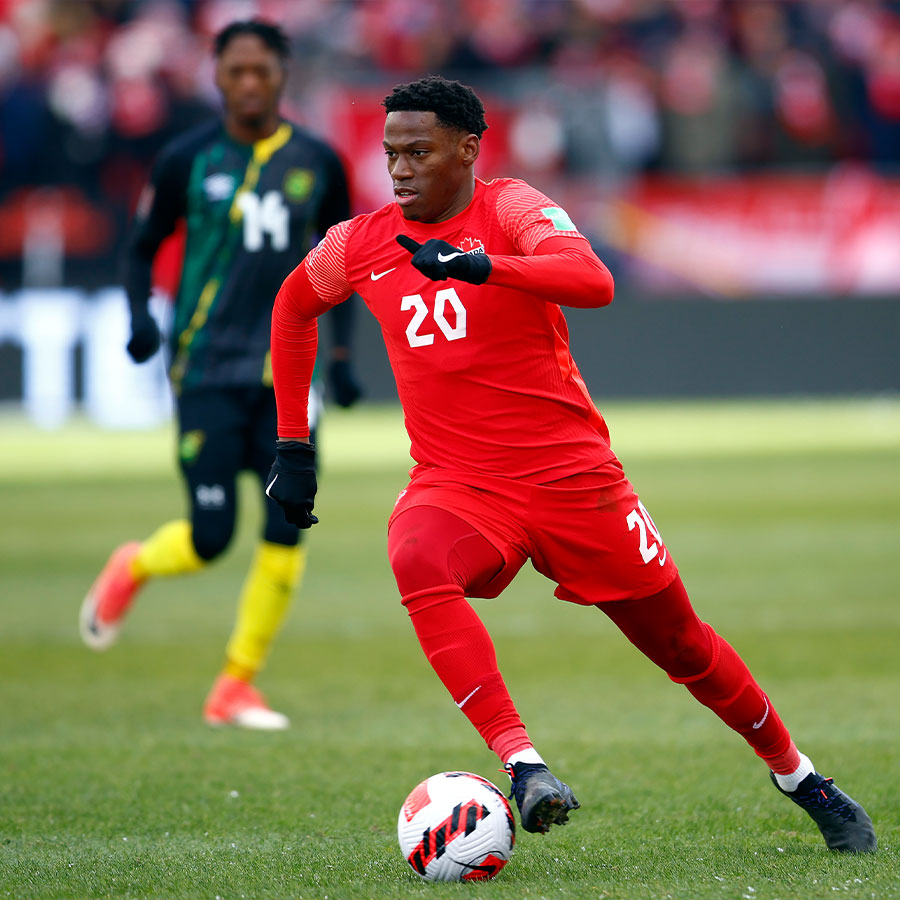 Jonathan David #20 of Canada dribbles the ball during a 2022 World Cup Qualifying match against Jamaica at BMO Field on March 27, 2022 in Toronto. Photo: Vaughn Ridley/Getty Images

On March 27, the Canadian men’s national soccer team defeated Jamaica on a below-freezing afternoon in Toronto. That win guaranteed the team’s qualification for the 2022 FIFA World Cup in Qatar.

The victory, only months after the women’s national team captured the gold medal at the Summer Olympics, signalled Canada’s full arrival on the global soccer, sorry … I mean football, stage.

The achievement, from an association football perspective, shows that something is brewing in Canada.

The team jumped 40 spots in the FIFA rankings within the year and has only had one previous appearance at the FIFA World Cup. The team’s first place qualifying performance — ahead of traditional Confederation of North, Central America and Caribbean Association Football powers Mexico and the United States — raises hopes of advancement beyond the group stages in Qatar.

The women’s national team has sustained a level of excellence for most of the century — winning multiple Olympic medals and consistently ranking in the world’s top 10.

Canada hosted the women’s World Cup in 2015 and the country is set to co-host the men’s in 2026 along with the U.S. and Mexico.

With the introduction of the Canadian Premier League, three Major League Soccer franchises, the push for professional women’s soccer opportunities, expanding club and academy opportunities and well-established university programs, the sprouts of a sustainable “pyramid” system are evident across Canada.

Although international achievements are relatively new, especially on the men’s side, soccer can be considered a success in Canada from a grassroots perspective.

Despite the mystique of hockey as Canada’s true sporting pastime, soccer long ago (and significantly) surpassed it in terms of participation. But for decades soccer was patronizingly viewed as a fun and physical youth activity or a serious sport only for immigrant families — not something that “typical” young Canadians might aspire to pursue professionally.

With the emergence of stars such as Christine Sinclair and Alphonso Davies, however, Canadian footballers are now globally recognizable. The success of the national teams has generated mentions on popular podcasts and in recognizable media outlets in the United Kingdom and in Europe.

The hope now for Canadian soccer development moving forward is that the well-established grassroots foundations of the game will converge with the top-down aspirational benefits derived from mega-soccer success.

Soccer As a Representation of Canada

The layers of meaning generated by recent Canadian soccer success go beyond the game’s past, present and future. Both senior national teams represent the emerging diverse features of Canada’s identity.

Despite earnest efforts, hockey has mostly failed to overcome its diversity challenges while soccer and basketball — plainly evident in “Jurassic Park” during the Raptors run to the 2019 NBA championship — reflect a more diverse Canadian population.

This idea of soccer as a representation of contemporary Canada goes beyond demographics and into moral identity. For decades, influential CBC hockey pundit Don Cherry effectively championed hockey as the ideal expression of Canadian morality.

Following a criticism of NHL star Alex Ovechkin’s goal celebrations, for example, Cherry condemned the Russian’s soccer-inspired antics and instead pointed to Canadian (male) hockey stars as real role models who could help “teach the kids the Canadian way.” In the same rant, Cherry remarked “We’ve got to watch that we don’t start acting like those goofy soccer guys.”

In 2022, however, soccer is embraced as a positive reflection of Canadian character, with athletes like Atiba Hutchinson and Stephanie Labbé as the embodiment of moral Canada.

But in the age of polarization, it is safe to say calling soccer or basketball the ideal representation of modern-day moral Canada will be met with resistance among traditionalist “hockey is our national sport” defenders.

Canada’s emergence onto the world football stage also has broader implications for international affairs. Football is the true global game — played and followed in every corner of the world.

Viewership of the 2018 FIFA World Cup, for instance, was estimated to have exceeded 3.5 billion. Hockey, referred to as “ice hockey” outside North America, cannot match the international scope of football.

Beyond Cold War infused events like the ‘72 Summit Series or the 1980 Miracle on Ice, ice hockey’s wider socio-political influence pales in comparison to the “soft power” of football.

And of course, Canada re-enters the men’s World Cup picture just as FIFA’s most controversial host — Qatar — readies for the November mega event.

Canada, described in international relations as a “middle power” state, now enters into this political fray as a recognizable “middle power soccer nation.”

Canada’s men’s team will inescapably become soft power instruments and tools of disruptive diplomacy, expected to challenge the inequities and atrocities happening in a Middle Eastern nation 11,000 kilometres away. And all this will be magnified when Canada becomes the co-host in 2026 with raised performance expectations.

It’s fair to say the team’s victory on Sunday meant something, eh?