The Big Mac at 50: Can a Hamburger Have a Mid-Life Crisis? 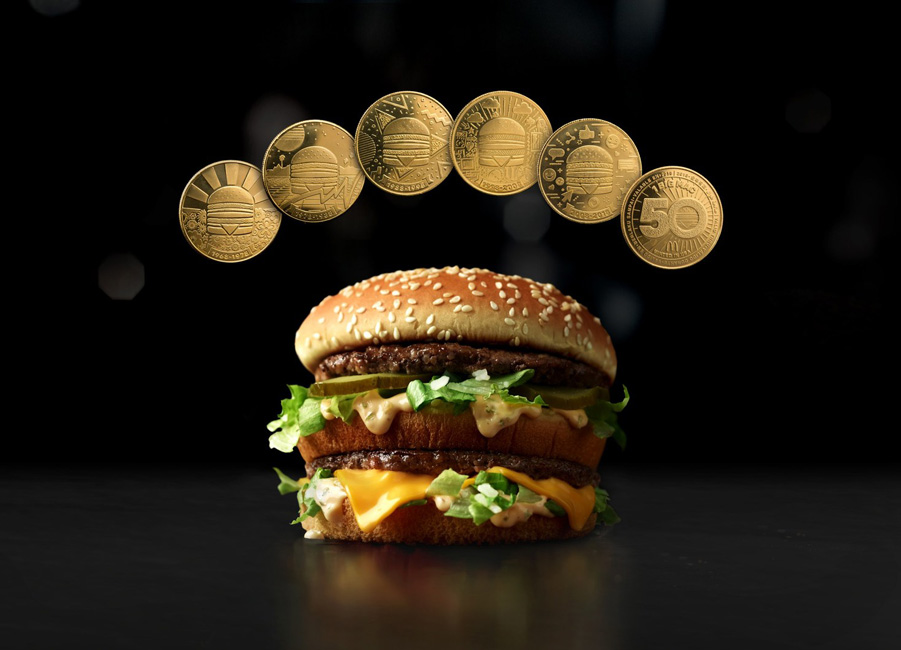 In 1968, a Pittsburgh-based McDonald’s franchisee named Jim Delligatti invented perhaps the most famous fast-food hamburger in history — the Big Mac. And 50 years on, in celebration of its golden birthday, McDonald’s is pulling out all the stops to promote the heck out of it, from dressing it up with bacon back in January to today’s announcement of a new hamburger-based currency, the MacCoin. Yes, you read that right.

According to a press release, the MacCoin is the “first fully food-backed global currency” and 50,000 of the little gold coins (see image above), redeemable for a free Big Mac, will be distributed in Canada. This, of course, is problematic for two reasons.

First, lets dial back all this hype about “food-backed” currency. We all know that, in Canada, we’ve been enjoying milk chocolate filled Canadian Loonies for years. Sure, they aren’t recognized on the McNASDAQ, or wherever “food-backed global currency” trades, but in Canada they rank first among money that you can eat. Second, of course, is the random penny we all inevitably swallowed as a child. But the MacCoin? Not only is it not edible, but it isn’t even available in restaurants. You have to enter a Twitter contest for a hope of getting your hands on one.

Secondly, and ultimately more problematic, is that it appears that, at age 50, the Big Mac is experiencing something of a mid-life crisis. Think about it. How many other 50-year-olds get a year-long birthday party? For a human 50-year-old the celebration includes a birthday card with a lame joke about being “over the hill,” a gift or two and then dinner at Swiss Chalet with family. If you’re lucky the server will let you pick a toy out of the treasure chest — you know, because you’re only as old as you feel (insert laughter from everyone at your table as you trade your dignity for a little plastic airplane from the treasure pile).

And yes, this is a beloved sandwich, so one might expect a bigger deal to be made of its birthday. Consider, however, this CTV report, which notes that, “Newer chains such as Shake Shack and Five Guys offer burgers that can make the Big Mac seem outdated. Even White Castle is modernizing, recently adding plant-based ‘Impossible Burger’ sliders at some locations … A McDonald’s franchisee fretted in 2016 that only one out of five millennials has tried the Big Mac. The Big Mac had ‘gotten less relevant,’ the franchisee wrote in a memo, according to the Wall Street Journal.”

The threat of irrelevancy fosters a powerful fear, particularly when one reaches a point in one’s life where they feel out of touch with the world, be it socially or culturally or, um, edible-ly?

Of course, Zoomer readers know that one’s age doesn’t preclude them in the least from remaining relevant, but has anyone told that to the Big Mac? Has anyone reassured the legendary double-decker burger that change is good — even necessary — and that it’s not a sign of irrelevancy but of personal growth?

If not, then let me make a personal plea, directly to the Big Mac itself:

Mac — can I call you Mac? Or do you prefer “Big”? No, that’s stupid. Of course you prefer Mac. Listen Mac, you don’t need to fret. You’re only 50 and you’ve got a lot of life ahead of you. There’s no need to do anything drastic like putting out your own currency or dating burgers half your age or getting a bun lift. Age is meaningless. It’s just a number. There are young 91-year-olds and old 19-year-olds. It’s your attitude that counts. And consider this — lava lamps, bean bag chairs and some brand of popcorn called Screaming Yellow Zonkers all turn 50 this year and you’re still far more relevant than any of them.

Mac, we love you for who you are on the inside — a disgustingly delicious double-burger with some weird mystery sauce and way too much lettuce, which falls out every time we take a bite. So by all means, have a happy 50th birthday. And make sure that any changes you choose to undertake are for your own well-being because, Mac, you’ve got a place in our hearts, and our stomachs, for a long time to come.