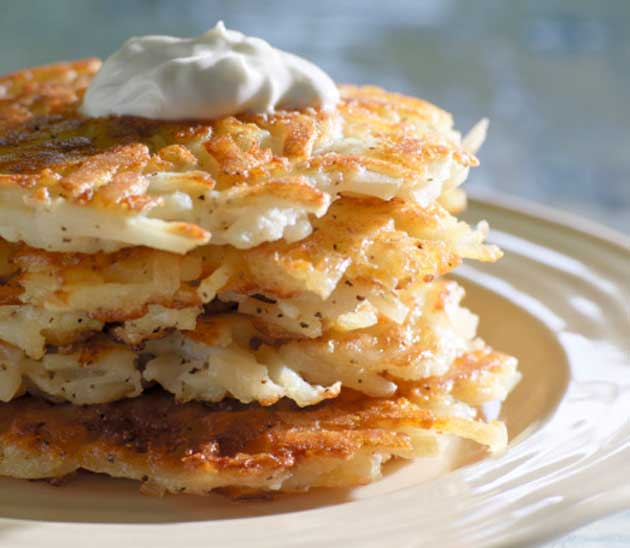 While many divine things have been done to the simple potato – it’s been scalloped, baked, roasted, mashed, hashed and french-fried – few dishes compare to the golden perfection of a latke.

No mere pancake or fritter, the perfect potato latke has a crispy, savory crust and a tender interior. While recipes abound and are often passed down through families, the traditional latke is made from a simple mixture of shredded raw potatoes and onions held together by a batter of potato starch and egg. In modern times, the latke has undergone innumerable stylish modifications including the questionable “low-fat” latke as well as complex recipes calling for everything from leeks and smoked salmon to beets and candied ginger. Traditionally, latkes are served with apple sauce or sour cream.

The miracle of the oil

Latkes, a term derived from Yiddish, originated in Eastern Europe or Germany in the 18th century. Over time, it has become an important culinary tradition for the Jewish holiday of Hanukkah.

The story of Hanukkah goes back two thousand years ago, when the Jews overthrew the Syrian Greeks and claimed the Holy Temple in Jerusalem. Upon entering the Temple, they found enough stores of oil to last for only one day.

Miraculously, this meager amount of fuel continued to burn brightly for eight days and nights until more purified oil could be found. To commemorate the miracle, an eight day Festival of Light was declared. Foods rich in oil, such as the latke, are eaten to remember the victory over the Greek invaders and the miracle of the oil.

Some historians also associate the latke with a lesser known military success, led by a beautiful, fearless widow named Judith. When the Assyrian army threatened the Jewish homeland, Judith stole into the enemy camp, under cover of night. Boldly, she made her way into the tent of Assyrian general Holfernes, offering him salty fried cakes made of cheese – which the general washed down with a copious amount of wine.

After Holfernes had sunk into a contented slumber, Judith hacked off his head with his own sword. His disenfranchised soldiers fled in fear, and the Jewish people were safe once more.

The latke is eaten in remembrance of Judith’s clever culinary coup, with shredded potato substituted for cheese.

Shred the potatoes and onion into a large bowl. Press out all excess liquid. Add eggs and mix well. Add matzah meal gradually while mixing until the batter is doughy, not too dry. (You may not need the whole amount, depending on how well you drained the veggies). Add a few dashes of salt and black pepper. Don’t worry if the batter turns slightly orange; that will go away when it fries.

Heat about 1/2 inch of oil to medium-high heat. Form the batter into thin patties about the size of your palm. Fry batter in oil. Flip when the bottom is golden brown.