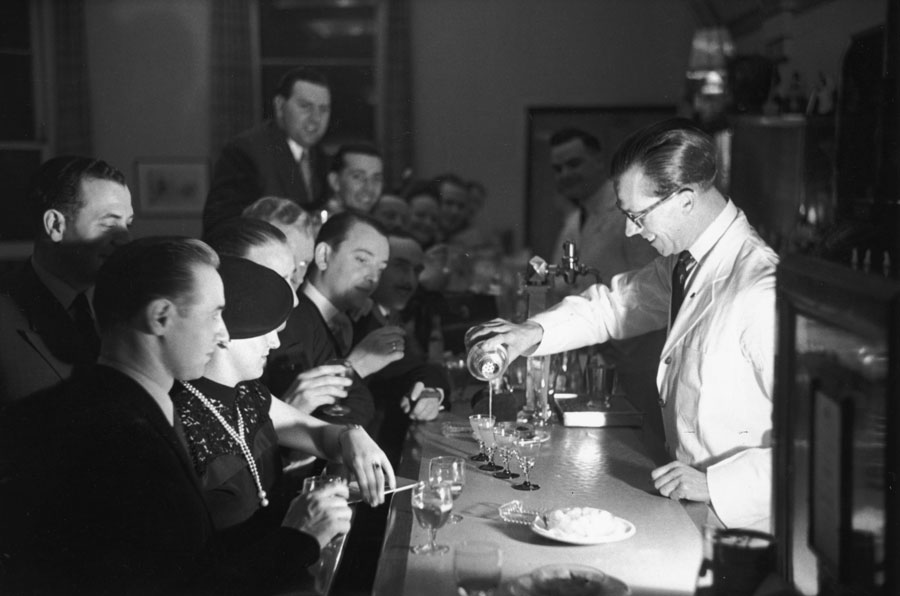 Transport yourself to another era with these seven classic retro cocktails.

“I like bars just after they open for the evening. When the air inside is still cool and clean and everything is shiny and the barkeep is giving himself that last look in the mirror to see if his tie is straight and his hair is smooth. I like the neat bottles on the bar back and the lovely shining glasses and the anticipation. I like to watch the man mix the first one of the evening and put it down on a crisp mat and put the little folded napkin beside it. I like to taste it slowly. The first quiet drink of the evening in a quiet bar—that’s wonderful.” – Raymond Chandler, The Long Goodbye

Before your guests arrive, there’s nothing quite like sipping a quiet cocktail. We have a few throwback suggestions that are as classic as Chandler’s admiring prose.

The Charlie Chaplin was a popular cocktail named after the silent slapstick Tramp and served at the Waldorf-Astoria in New York. It’s a warming winter drink based on sloe gin — the red liqueur made of plum-like blackthorn fruit steeped in gin. Should you have access to the shrub by all means make your own but Canadian liquor stores have started to import retro sloe gins like Hayman’s.

Alcohol production actually increased during American Prohibition’s 13 years, according to experts like drinks writer Christine Sismondo (we loved reading her cultural history of taverns, saloons and speakeasies America Walks into a Bar). To take the edge off bathtub gin, Harry McElhome of Harry’s New York combined it with lime cordial and you can bet it was sipped by the patrons at Texas Guinan’s night clubs, too. For a patriotic take, mix things up by exploring one of the many terroir spirits from the boom in Canadian-made craft gin. In Quebec there’s Distillerie du St.-Laurent, Cirka, Madison Park and my personal favourite for a gimlet, Distillerie Mariana’s foraged Canopée Gin Forestier is resinous with juniper as well as pine (all available at the SAQ), Ottawa’s North of 7 distillery has one called Triple Beam, Nova Scotia is tongue-in-cheek with Willing to Learn. There’s no reason not to go coast to coast: in B.C., from distilleries like Victoria Spirits, Longtable, or Ampersand in the Cowichan Valley and and over on the Rock, Newfoundland Distillery Company produces a London dry style with juniper and cloudberry as well as one with mineralic seaweed botanicals.

How to: Equal parts gin and Rose’s lime cordial. In the absence of lime cordial, use fresh lime juice and simple syrup.

There are many recorded French 75 recipes, including the 1930 landmark The Savoy Cocktail Book. For an of-the-moment update that embraces the current trend for Asian spirits, Toronto microdistillery Yongehurst Distillery’s new Japanese-style Kasutori Shōchū  is made from distilled rice and koji that’s fresh pressed then still-soaked in sake. At 35% ABV it’s a stronger western take on shochu that offers more variety: it can be lightened up with warm water or green tea, or sipped as a variation in the main spirit of a classic cocktail.

How to: Flip Bogey and Bergman’s French 75 into a Japonais 75 by substituting gin with shochu. Fill a cocktail shaker with 2 oz shochu, 1 oz fresh lemon juice. Shake, strain into a coupe and top up with Champagne.

In Casablanca, admirable Francophile Humphrey Bogart says he’ll water his garden with Champagne before he’d let the Germans drink any of it. He and Ingrid Bergman sip French 75s but we think he would have done the same with any French spirits still left in the bar at Rick’s Café. So let’s have a French Mule, the gallic variation of the Moscow Mule Rick would surely have made, had he heard of yet. No, he doesn’t come from Russia: According to one tale, Smirnoff Vodka invented it in 1941 with Jack Morgan, owner of Los Angeles Cock ‘n’ Bull, who was trying to market his ginger beer. Another version has it that émigrée Sophi Berezinski was laden with 2,000 copper mugs (from her father’s copper factory back home) and needed to find a buyer. This was at a time when America had little interest in vodka — the holdover from Prohibition was a prevailing taste for whiskey and gin cocktails. However the ingredients came together, they are refreshingly delicious.

How to: Fill a copper mug half-way with ice (we like the mugs at Canadian mixology mecca cocktaimemporium.com), over which you pour 2 oz Cointreau, 1 oz Vodka, Juice of half an orange, Juice of half a lime, 1 can cold ginger beer or ginger ale, and stir to combine and chill. Add lime or orange wedge. (Recipe courtesy Paris Convention & Visitors Bureau)

“I have taken more out of alcohol than alcohol has taken out of me,” Winston Churchill once said. In Gary Oldman’s incredibly humane performance as Churchill in Darkest Hour, the prime minister was also a prodigious drinker — with a taste for the finest. He enjoyed cognac, Champagne and claret throughout his life and during ‘Operation Dynamo,” as the evacuation of Dunkirk in the spring of 1940 during the Battle of France was known (the terrain covered by the movie). In December 1941 after Pearl Harbor, the Churchills spent Christmas in Washington with FDR and Eleanor Roosevelt, who ensured the White House was especially well-stocked with brandy. But for decades his daily drink was something else entirely: blended Johnnie Walker Red Label whiskey, diluted. Churchill’s children called his daily whiskey and water a Papa Cocktail. Later in prosperous postwar America, as Mad Men attests, whiskey by the glass was as common as water.

How to: A light pour to cover the bottom of a glass, topped with water.

“Whiskey or Cinzano?” is the choice Antony Armstrong-Jones gives Princess Margaret when he invites her to his studio loft for seduction in season two of The Crown. The Windsor women like their fragrant wine-based drinks! In another scene before lunch, Queen Elizabeth and Elizabeth, the Queen Mother are seen taking delicate sip of a rose-coloured elixir is almost certainly their trademark variation on a Dubonnet cocktail, a fortified quinine and wine aperitif dates back to Queen Victoria’s day. So simple to make, the royal we could even mix it herself! On her majesty’s secret recipe.

How to: Two parts Dubonnet Rouge and one part Gordon’s gin, stirred, then poured over two ice cubes and garnished with orange or lemon.

“The Aviation cocktail is Chelsea Flower show in a glass,” Amy Stewart writes in The Drunken Botanist, her fascinating exploration of the botanicals that have been transformed into alcohol over the centuries. It is as decorative as it is delicious. Like its principal ingredient it is a glowing violet, softer than the deep purple Ultra Violet hue that Pantone named its ‘2018 colour of the year.’ More like a twilight sky. The taste is both a refreshing citrus and a slightly chalky floral (think French pastilles). The Aviation was among the last popular cocktails before American Prohibition took hold in 1920 and it disappeared for the better part of a century. The old-school gin cocktail enjoys a renewed popularity thanks to a revival of its key ingredient — crème de violette. It’s availability and varieties have increased and are now easily found in Canada, by brands like Dolin or Pagès. Crème Yvette will do in a pinch but look first for my own pick, Giffard’s Crème de Violette — it’s widely well-stocked at the LCBO, Alberta and BC Liquor stores.

How to: Stir 1.5 oz gin, .75 oz fresh lemon juice, 0.5 oz crème de violette and 0.5oz maraschino liqueur (though I prefer a drizzle of the juice from the jar of cherries). Add a good maraschino cherry (like Luxardo at cocktailemporium.com) or a lemon peel twist.