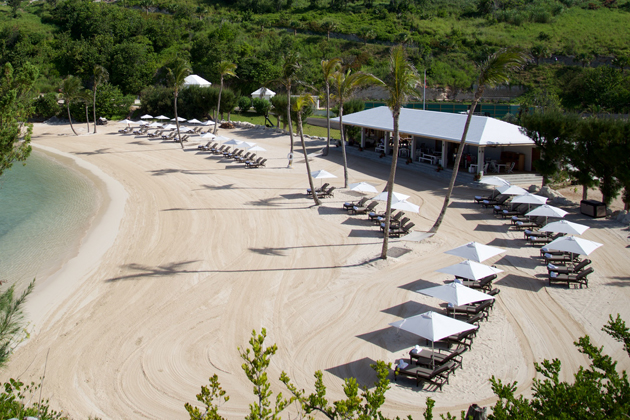 Experience a taste of Bermuda at home with these three recipes from celebrity chef Marcus Samuelsson.

And yes, pink is a colour of happiness, of lightheartedness. It beckons and charms us. In Hamilton, Bermuda’s largest city, I was charmed by a place that’s affectionately called the Pink Palace by locals. It’s the Hamilton Princess & Beach Club, a Fairmont managed property and, this past summer, it entered its second act. After two years and about $100 million USD later, the more than 100-year-old hotel is ready for its close up. Luckily, my foodie appetite was also enlivened, due to the recent opening of Marcus’, the eponymous island outpost of New York City-based celebrity chef Marcus Samuelsson, seen above, greeting me at the launch party. He’s known for Red Rooster, the groundbreaking Harlem restaurant where his interpretation of American comfort food informed by the storied NYC neighbourhood is fused with his adoptive parents’ Swedish roots and his own Ethiopian heritage. I was told not to miss the Sunday jazz brunch here, and I didn’t (see Marcus’ Chicken and Waffles, yum, above). Worth the splurge, it’s a live music-filled way to start the day and, with a buffet – two full countertops worth – of Samuelsson’s trademark cuisine, tweaked, of course to suit this mid-Atlantic island vibe. I even managed to charm the charming chef into sharing a few of his Harlem-meets-Bermuda recipes with you, dear reader.

Click through for three of chef Samuelsson’s recipes. Try them at home, or just go to Bermuda. You’ll be feeling in the pink, too. Jerk Sauce: Combine all ingredients in a blender and process until smooth

Slaw: In a large bowl, combine cabbage, red onions, vinegar, sugar and salt; cover with a paper towel and weight down with a heavy pan or bag of dried rice/beans. Let stand overnight. Squeeze out liquid and mix slaw with apples and mayo. Season with salt if needed.

Pork Belly: Score skin of pork belly about a quarter inch (be careful not to cut through to the meat). Season with salt and pepper on both sides and drizzle with extra virgin olive oil. In a cast iron skillet or baking dish, bake pork belly in 250 F oven until completely tender, about 5 hours. Cut into four equal portions and drain excess fat. (You can refrigerate cooked pork wrapped in foil for up to 5 days at this point.)

To serve, roast cooked pork belly skin side up in 450 F oven until the skin is bubbly, about 15 minutes. In a small skillet, fry the quail eggs. Serve pork belly on top of the fava beans and slaw with a drizzling of the jerk sauce and egg on top for garnish.

Deglaze pan with sherry pepper sauce and rum; add tomatoes, fish stock, chicken stock, chili sauce, thyme, bay leaves, cloves and salt. Bring to a boil; reduce to simmer and reduce by half. Add the parsley and taste for seasoning.

Aïoli: Sweat garlic in 1 tsp of the oil and let cool. Mix egg yolk with vinegar, rum and garlic. Slowly whisk in the rest of oil and season with salt to taste.

Croquettes: Fold mashed potato into 1/3 cup of the fish chowder, 1-1/2 tbsp of the rum aïoli and diced fish until it holds together when you form a ball. Form tablespoon-sized balls. Coat each in egg wash and panko crumbs and fry until golden brown. Garnish with fresh lime wedges.

Tomato Stew: In medium saucepan, sauté onion and garlic in olive oil. Add salt and cook until softened. Stir in tomatoes, chili and rosemary. Bring to a boil, reduce to a simmer and cook for 5 minutes.

Grits: In a large saucepan, bring milk and water to a boil. Slowly whisk in grits and reduce heat to low. Cover and cook for 25 minutes or until grits are creamy and cooked through, stirring occasionally. Off heat, stir in cheddar, Parmesan and salt and pepper to taste.

Fish: Combine tomato powder, paprika, chili and salt to form a blackening rub. Coat fish in the rub. Heat oil in a large skillet until shimmering. Sear fish on both sides until blackened and cooked through, 2 to 3 minutes per side.

To serve, ladle tomato stew on top of cheddar grits. Top with one piece of blackened fish.