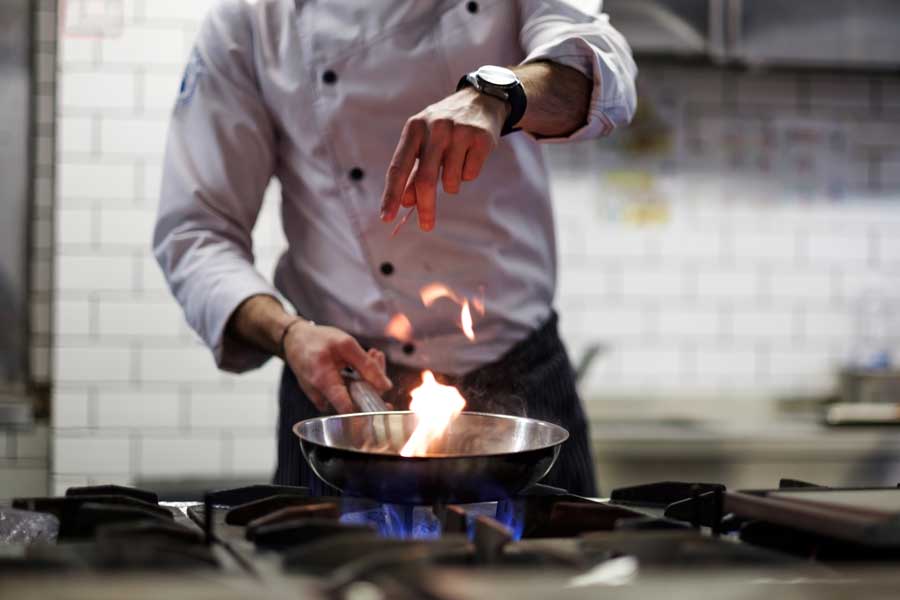 Pass the butter – and the salt! Properly used, these everyday ingredients can elevate your food.

A couple of months ago in a stylish new downtown Toronto restaurant, I enjoyed what I thought to be a highly accomplished meal of the modern French style. It had begun, convincingly, with a amuse-bouche consisting of a miniature edition of one of my favourite tricks with potato from the French culinary canon: pommes soufflées.

In case you are not familiar with them, be advised that pommes soufflées are exactly as they sound. They are potatoes bloated like aroused pufferfish, bronzed and crisp on the exterior, while inside, a foundation of lightness and hot air and potato-scented steam.

The trick of them is to slice potatoes in discs, then blanch them in oil until air pockets form inside,. Then you must drain and rest and cool them and, finally, drop them in oil that is much hotter still – which causes the air pockets inside them to inflate like balloons just before it renders their exteriors crisp and set.

According to legend, the world’s finest accompaniment for grilled Dover sole was invented by accident back in 1837 when a French chef preparing an elaborate meal had to back off and wait because his guests were late. When they finally showed up and he returned his half-cooked potatoes to the fryer, he was shocked to see them puff up into this new state of perfection.

If only it were that easy. If you have ever tackled the side dish at home, you will know that you need a lot of skill and luck on your side. The potatoes need not be of a certain kind (waxy) and a certain age (old). You must cut them in a very particular octagonal shape and get the thickness just so. And even at that, half of them invariably turn out more like potato chips than potato pillows. Which is why I was so impressed  by the rule-breaking round and miniature ones that kicked off that recent meal in Toronto.

“But that’s easy,” Kristian Eligh, chef at Vancouver’s Hawksworth Restaurant, said over a recent nightcap there, “All you have to do is …”

Okay, I’ll tell you. There is a new and improved way going around to make pommes soufflées. Never mind the shape-cutting or even peeling the potatoes. All you have to do is slice some potato paper-thin on a mandoline, then brush it lightly with egg white, sprinkle it with corn starch and, finally, lay another sheet of potato right on top of it – or any shaped cutter you like – and punch out your two-ply potato disc with a 100 per cent puff rate guaranteed.

If these sorts of new-and-improved cooking techniques turn your crank and change your life as they do mine, you should probably be spending more time hanging out with chefs, as I do.

And if you fancy collecting tricks like how to clarify stocks into consommés with gelatin and refrigeration instead of heat and egg white’s or how to best use a Silpat to speed-cool cookies, tuiles and crumbles, you will have to. Because such skills are too esoteric for anyone to want me to focus on here.

But I will happily instead convey some of the more practical knowledge chef’s and experience have taught me.

To begin, let it be said that the No. 1 rule that governs the professional restaurant kitchen is exactly the same as the one that should direct your own initiatives at home: never let your reach extend beyond your grasp.

When a great Michelin-starred chef is cooking a wedding banquet for 200, he doesn’t do a tasting menu. And neither should you when eight people are coming for dinner. Stick to what you know, keep it simple and get it right – 0r better.

Now then, let’s get started. Over my 20 years as a food writer, I have spent a lot of time watching chef’s cook and give instruction in their restaurant kitchens coast-to-coast – and abroad. Far too many chefs and restaurants than I can enumerate here. I am indebted to many of them for obscure know-how. but when it comes to practical day-to-day approaches to cooking, I certainly gleaned the most form Mark McEwan and his excellent team of chefs at his four restaurants while I worked with them on two cookbooks – for which I am home tested and wrote some two or three hundred recipes.

There was a lot to take away from all that. But for starters, I will focus on two big reasons restaurant food tastes a lot better than yours. Two reasons it tastes brighter and more assertive and luxurious on the palate and its flavours are more enticing than your own. They are butter and salt.

I am not advocating they be used to excess, just that they be deployed correctly, to more advantageous effect. Salt first. Salt is your friend. Anyone who fears an excess of salt in their diet should just stay away from junk food and processed food of any kind, like I do. But if you’re going to cook, use salt properly and often.

Start by buying the same salt you find in every restaurant kitchen of quality I’ve ever walked into: kosher salt (and invariably, Diamond Crystal brand). It’s cheap, mild and effective.

Every protein you cook needs salt before you cook it. You want to grill a steak or hamburger and obtain that delicious caramelised crust of intense flavour you associate with the finest steakhouses? The Maillard reaction that is the root cause of those rich and addictive flavours is enhanced and accelerated by a dry surface – best achieved with salt. You’ll need to apply a tiny bit of olive oil to the meat first. Not for flavour – just for the salt to adhere to.

Then sprinkle – liberally – and add some more. Just don’t cluster it.

Many years ago, I read a profile of the great American chef Thomas Keller that began with a description of encountering him off hours at his restaurant, standing on a ladder and sprinkling salt on some meat below.

The idea being that any extra distance between your salt-distributing hand and its target will only encourage more even distribution. You may forgo the ladder, but keep the idea in mind and never get too close to what you are salting.

When you are cooking fish, do the same. Salt it generously half an hour before cooking it, then rinse it off and pat it dry. Or put it in a mild salty brine and do the same.

You know those white proteins that ooze from the flanks of a fillet of salmon when you bake, pan roast or grill it? No more – not if it’s salted. Salt intensifies the flavour of the fish and firms up the flesh so that it holds its shape better while cooking, too. You like crispy skin on your salmon, like the stuff in those hand rolls at the sushi bar? Salt it.

If you want it crunchy-crisp, hang it at room temperature instead and point a fan on it. The Chinese have been doing it with ducks for a thousand years. Susar Lee used to do it with Cornish hens and , on the other coast, Pino Posterero does it with chickens. too. Japanese restaurants do it with fish.

Salt should also be deployed for the opposite effect: preventing browning.

And all that aside, you need salt for seasoning too.

Try thinking of butter as a seasoning, too. Just before serving a bowl of pasta, right when it’s all combined in the pot, add a tablespoon of butter to the pot and stir it in off heat. Your pasta glistens, the flavours meld and sing.

Do the same with a reduction or jus or sauce. Whisk in one tablespoon of butter, and your sauce is in a different class.

If all this scares you, at least try this: next time you make a tomato salad and are including basil leaves in the mix, lay them first in the palm of your hand and clap your hands together to smack the leaf hard.

Now smell that leaf side by side with another untouched.  Note the difference.

Now, perhaps you’ll believe me about all the rest.