Food for Thought: When Eating Out, Older Diners Prefer Tried-and-True to Trendy 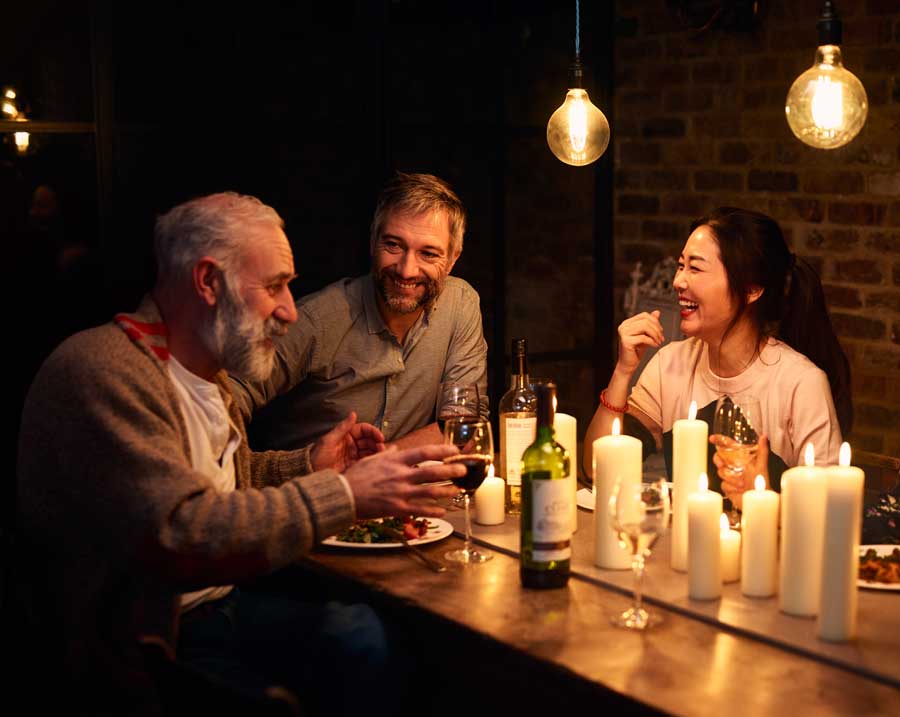 In a mid-week act of spontaneity, my neighbours Dan and Marie and I headed out to our favourite neighbourhood restaurant, a cozy comfort-food place on Danforth with great taps and a menu highlighted by spicy Korean fried chicken.

Marie is my age, a just-retired Human Resources executive at a financial firm. Her husband is older, and has followed various passions over the years, including photography. Both are on the same career wavelength now. We always have great conversations, often over food and drink.

The woman serving us was new. Well, she was one of the absentee owners, but had recently decided she wanted in on the action. She came by to explain that there was a new menu (not really all that different).

“Do you know, she’s served us three times and that’s the third time she’s told us there’s a new menu?” Marie said after our server had left. “She has no idea we’re regulars.”

Marie was genuinely miffed. All the other staff in the place know Marie and Dan, and we were, as always, warmly greeted as we walked in the door, even with a near full-house of customers.

Not a quarter-mile away, in an odd corner of Toronto’s East End, adjacent to Little India, a tiny Egyptian-fusion restaurant has become THE brunch destination for hipsters all over the city. Every morning and through early afternoon, the lineup (generally no one over age 40) stretches down the street. The wait can be more than an hour, even in the dead of winter. At one point, the owners put heat lamps outside so as not to be responsible for cases of hypothermia.

Never mind being recognized, these younger diners were probably happy just to feel their fingers again.

Bianca, my wife, and I ate at the hipster restaurant shortly after it opened, in a down time. We enjoyed the food, but now look at the constant lineup as an ordeal of insanity.

Recently, the New York Times ran a piece by its former food critic Frank Bruni that detailed the preferences of diners over 50. They apparently like what they like. While they’re okay with ambient noise, they don’t like 100db dance music as background. They’re not generally on the lookout for the next big thing. And they like being well-treated.

Michael Bonacini is doubly famous, firstly as the most genteel of the judges on CTV’s MasterChef Canada, which just started its sixth season. Secondly, he is a chef/restauranteur, whose company, Oliver and Bonacini, runs 22 restaurants, including some of the city’s long-time favourites like Jump and Auberge du Pommier. The flagship, Canoe, opened in 1995. You don’t last that long with a clientele of just kids.

“I think we are all, by human nature, creatures of habit,” says the 59-year-old Bonacini, “and I have my go-to place I go to regularly, and regular things I like to eat. And certainly, there are moments when I struggle to see some of the print.

“We’re just about to open a new restaurant (a French bistro called Maison Selby) and I was at the Family and Friends dinner. And even with my new prescription glasses, it was tough for me to read the wines by the glass. So, I have made a mental note to let my guys know that we have to increase the point size.”

As for the noise, surprisingly, on that occasion Bonacini asked his staff to turn the music up.

“I do have to hear music playing in the background because I think music is such an important piece of the vibe of a restaurant space. But not only does it have to be the right genre of music, it has to be the right level. And that level is not something you can set in the morning and it’s good all day.

“It has to rise and be lowered as the energy increases and decreases within the restaurant space.”

The good news is that the time when the music and ambient noise is loudest at, say, Canoe — 7:30-10:30 — is the time when some of us are least likely to want to eat dinner. While I’m not at the Blue Plate Special stage yet, dinner at 10 is not a recipe for a good sleep later (when I was younger, I’d close a club and then go looking for late night Chinese).

Food blogger and podcaster Marion Kane, the former food critic for the Toronto Star and Sun, has a simple rule noise-wise. “I hate loud noise, a ubiquitous curse in most restaurants. If I have to lip-read, I don’t go back,” she says.

But her number one beef is chairs. “Some years ago, I was on a food panel about eating in restaurants. I was asked what was my top criterion for dining out. I answered: ‘The chair.’

“I still believe that 20+ years later — but more so. I am 72. Comfort and ergonomics of a place when eating out is paramount.

“I am a short woman. Most chairs in public places are designed for men — too low and big to support this dainty body. I carry a cushion in my car for the big chairs. I seek out restaurants that have comfortable chairs. Sadly, mostly they are found in expensive ones like Le Bernardin in Manhattan. But it’s not rocket science.”

Most of the Oliver & Bonacini restaurants have a core group of regular customers. And though his inclination is to shake things up occasionally, menu-wise, Bonacini admits there can be pushback.

“In the restaurant business, success is measured by one’s longevity,” he says. “There’s no get rich quick scheme. It is more about the marathon than it is a sprint. So, menus that change seasonally are an important piece of the chef’s vocabulary.

“But no matter what you take off the menu, you will always get some blowback. ‘Oh, that was my favourite dish! Oh, we only come here for that particular dish. Oh we brought Bill, Bob, Tom Dick and Harry to try that dish.’
So, we often think we are constantly searching for something new and exciting, but we get upset and indignant if a couple of our favourite dishes are removed.”

Being in the long game is Bonacini’s favourite place. He has a unique view of the alternative when MasterChef Canada winners and finalists go on to start their own restos. “Young people starting today, because of social media primarily, you get one opportunity to hit a bullseye. Whereas in the older days with no social media, it would take months, a soft opening, a couple of reviews, that would build word of mouth.

“But today, because of short attention spans, decisions on restaurants come fast and furious. It’s fascinating to watch on the sidelines.”