Sampling Tapas and Wine On a Whirlwind Tour of Spain 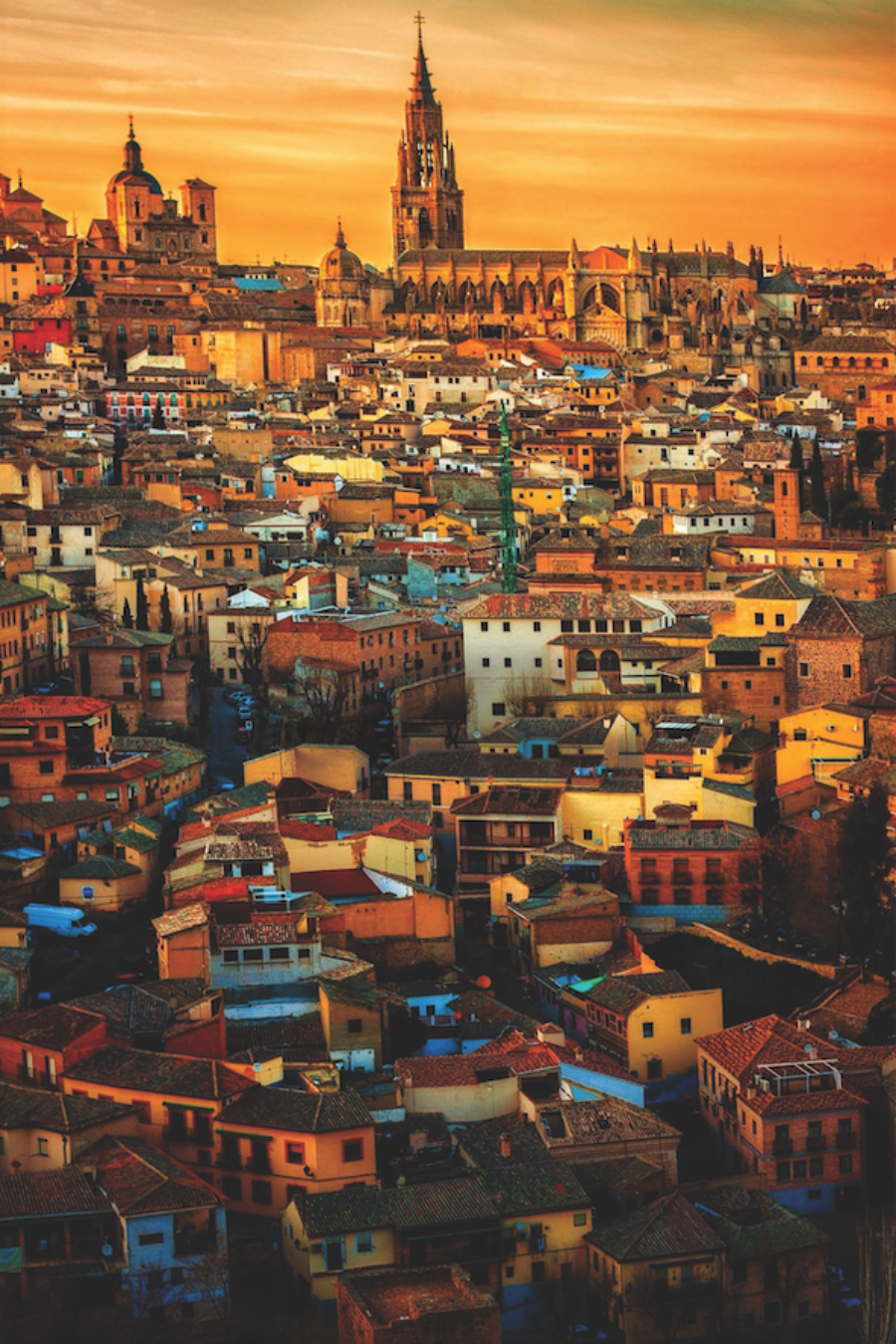 Just once in my life,” my colleague murmurs to me, “I want someone to look at me the way that man is looking at that leg.” But when the leg in question is jamón ibérico de bellota, which can sell for more than $250 a pound, reverence is the only way to approach it.

At Madrid’s Cinco Jotas restaurant, the professional ham cutter leans over the wooden ham stand, shaving paper-thin, dark red slices from the dry-cured ham and draping them over a dish shaped like a volcano that gently warms the creamy ham. Sourced from black Iberian pigs free-ranged in oak forests where they fatten up on acorns, the resulting meat is extraordinary, with a melt-in-your-mouth quality — the ham’s unsaturated fat purportedly has the same properties as olive oil. Pairing it with a chilled, bone-dry, pale-gold Fino Quinto sherry highlights its nuttiness.

The appearance of jamón ibérico de bellota that night will be only the first of many. The Iberian specialty, cured for at least two years, shows up in almost every meal over the next three days, along with myriad tapas. The ideal way to eat, the small portions allow us to taste everything: patatas bravas, fried cubed potatoes with a spicy tomato, red pepper and chili sauce; béchamel-based croquetas filled with jamón; gambas, prawns sautéed with garlic and chili; and tortilla española, an omelet with fried potatoes and onion. We play Russian roulette with pimientos de Padrón, glistening steaming small green peppers usually mild but occasionally shockingly and unsuspectingly hot. All swished down with usually red wines but sometimes white or rosé from La Rioja.

My host on this trip is Spain’s well-known Osborne Group, founded in 1772 in Andalucia. Since then, it has expanded beyond its sherry origins. The family-run company is now involved in wine, gin, Iberian ham products and restaurants. Sixth-generation vintner Rocio Osborne has joined us for a whirlwind tour of Spain — from Andalucia’s Sherry Triangle, where it all began in 1772, to Rioja in the north, the best known of the country’s 60 wine regions. Along the way, we pass many of the 90 legendary black bull silhouettes that have come to symbolize Spain as much as the Osborne’s Toro brandy that the original 500 statues first advertised along the roadways back in the 1950s.

The company’s original bodega in the Andalucian town of El Puerto de Santa Maria encompasses the cavernous Toro Gallery housed in an 1840s warehouse. It’s a paean to the history of the company, its connection with the arts and the cultural impact of the famous black bull. The exhibit includes a special edition brandy bottle designed by the surrealist Salvador Dali in 1964 as well as advertising campaigns by renowned photographers Annie Leibovitz, Richard Avedon and Helmut Newton. Through Father Francis Zavier Morgan Osborne, a Catholic priest who worked in England, some of the Osborne money supported families in need, notably paying for the education of J.R.R. Tolkien after he was orphaned. The name Bilbo Baggins may have been derived from Balboa, now the site of the Guggenheim Museum in northern Spain.

At the bodega in El Puerto de Santa Maria, centuries of history are unveiled through the tasting of VORS (very old rare sherries — as in 35 years old). We start with the dry sharp pale Fino Quinto. Its low acidity goes well with the ripe tomatoes we rub over grilled bread and drizzle lightly with olive oil. On we go through five increasingly older and darker sherries, culminating in the lush raisin-y Pedro Ximenez 1827, served cold so the higher alcohol content isn’t the first character to hit the nose and paired with pungent blue cheese and dried fruit. Outside, in the walled courtyard, Rocio points out the circular staircase where, as a child, she chased her cousins up to her grandmother’s kitchen when they were called in for lunch.

We fly from Seville, the capital of Andalusia, leaving the sherries of the south, to Bilbao and the Rioja region. Riojas — the Spanish wine takes its name from the region — are predominantly made with the indigenous Tempranillo grape, known for its strong tannins — similar to a Cabernet Sauvignon but fruitier.

The three distinct growing areas in Rioja produce different qualities of grapes. It’s the terroir, as the French call it, that defines the taste: the Rioja Alta, where we’re headed, is about 1,500 metres above sea level, producing a bright fruitier wine than the lower eastern sub-region, which is warmed by Mediterranean winds resulting in highly alcoholic wine with less acidity and aroma.

Bodegas Montecillo (“little mountain”) in the prestigious Rioja Alta was created in 1870, the first winery in the town of Fuenmayor, by an originator of modern Rioja wine, Don Celestino Navajas Matute, who was convinced of the wine methods of Bordeaux.

A century later, the continuing success in wine production was not matched by a production of heirs, and the winery was sold to the Osborne Group. The current winemaker, Mercedes Garcia Rupérez, while remaining dedicated to the terroir, works on being “an age-old winery that creates great modern wines.” Its flavours are fresh and bright with less alcoholic content (at 13.5 per cent) than most wines. We sample a range of them with a delectable lunch of white asparagus, potato and chorizo stew, then cod in tomato sauce. Dessert is pears poached in red rioja. For that, there are no adjectives — only reverence.

Do not pass up the Guggenheim Museum in nearby Bilbao under the cable-stayed Prince and Princess of Spain Bridge, also known as La Salve Bridge. The titanium-clad museum, designed by Canadian-American architect Frank Gehry and opened in 1997, has transformed the industrial port city. The building itself is a sculpture, as much as an attraction as any of the contemporary works exhibited inside. Gehry’s fascination with fish scales (from watching his grandmother’s carp) is reflected in its facade and the fish-shaped glass panels. To celebrate the 10th anniversary of the museum, French artist Daniel Buren was commissioned to create the red arch over La Salve Bridge, effectively connecting two incredible works of art.

In large skillet, melt butter and cook green onion briefly; stir in flour and cook 1 minute to make a roux. Whisk in milk and cream; cook over low heat about 20 minutes until thickened like a béchamel. Stir in ham, nutmeg, salt and pepper. Refrigerate for 24 hours.

Shape into croquettes. Dip into beaten eggs, then roll in bread crumbs. Heat oil to 350 F and sauté ham rolls until golden. Drain on paper towels and serve.

In large bowl, combine all ingredients and let stand 24 hours. In food processor or blender, process at high speed in batches until smooth. Chill for 4 hours. Serve in soup bowls garnished with chopped Spanish ham and hard-cooked egg.