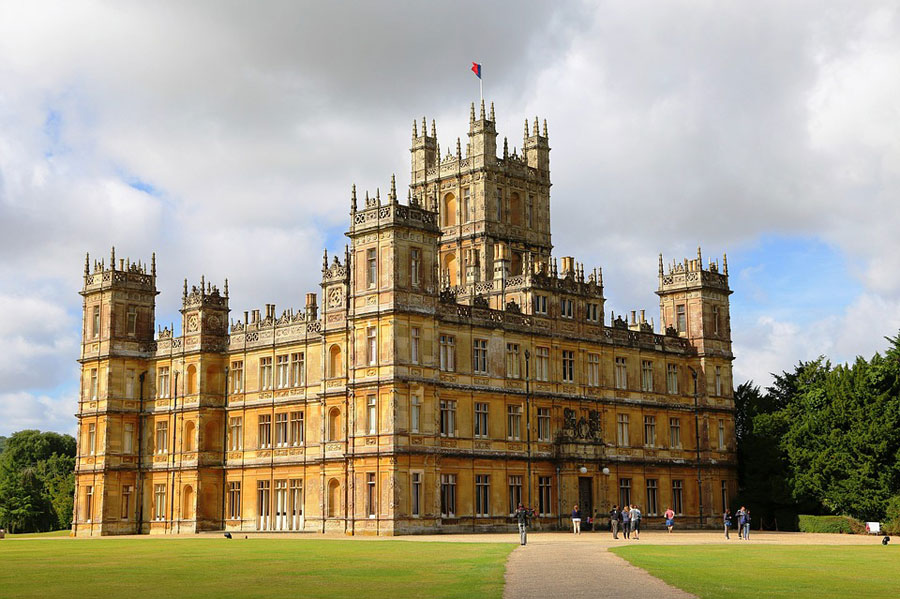 The first time I toured Highclere Castle, the television show Downton Abbey was at its zenith. It had become a pop-cultural/historical fiction phenomenon, and there was no stopping it. I was in England for the 100th anniversary of the beginning of the First World War, and the house, which was the film location for the fictional Downton Abbey, had been a centre of lifesaving and sanctuary for many soldiers, including Canadians during the war. Just as had been depicted in the second season, Downton (or Highclere, rather) had been transformed into a hospital for convalescing war wounded. The family that lives there wanted to make sure this memory was kept alive, so it was a bit of an emotional visit, with stories of the era told as we walked the grounds.

The lady of the house, Fiona, Countess of Carnarvon, or Lady C to those who work with her — and wife of George Herbert, the eighth Earl of Carnarvon — is a keeper of history and had published a book about that time, Lady Almina and the Real Downton Abbey, and she’s gone on to pen two cookbooks featuring family recipes from Highclere, as well.

On this, my most recent visit to Highclere, I was invited to afternoon tea with Lady C.

Here, a few recipes I gained from my visit.

The recipe for Pimm’s is a closely guarded secret. It was created by James Pimm during the reign of George IV to accompany the oysters which Pimm sold in his restaurants. The base is often gin flavoured with various herbs, spices, fruits and botanicals. The result is a dark brown “summer cup,” which is perfect with croquet, cricket or golf. Unfortunately, given it tastes delicious and has lots of fruit in it, the alcoholic content is occasionally forgotten!

Put apple, cucumber, strawberries and most of the orange slices into a large jug with some ice. Pour in the Pimm’s, then lemonade and stir gently. Mix thoroughly. Garnish with mint leaves and reserved orange slices.

For an alternative to lemonade, try the same proportions with ginger ale or — Maggie’s tip (who looks after the horses at Highclere) — use champagne instead of lemonade.

6 figs
100 g (4 oz) walnuts
1 tbsp cold-pressed extra virgin olive oil
1 tbsp balsamic vinegar
A few lettuce leaves
4 slices prosciutto
Ciabatta bread
Roughly chop figs and walnuts. In a bowl, combine figs and walnuts; drizzle with oil and vinegar. Mix together with clean hands. Place in an ovenproof dish and cook in 350 F oven for 15 minutes.
Wash and pat dry lettuce, then arrange on a plate along with the prosciutto. Spoon over the warm figs and drizzle with a little more oil. Serve with warm ciabatta.

“My husband absolutely loves tomatoes,” says Lady C, “and this recipe is perfect for when the greenhouses are producing a glut of fruit. This recipe is perfect for a summer lunch or supper, served with a mixed green salad. I like to include some good basil leaves as they have so many health benefits, from vitamins K, C and A to manganese, copper, calcium, iron, folate, magnesium and omega-3 fatty acids!”

In a deep frying pan, preferably cast iron, heat oil over medium heat until shimmering. Add tomatoes, thyme and sugar and season lightly with salt and pepper. Cook, stirring occasionally, and as tomatoes begin to pop and release their juices, use a slotted spoon to press each down gently to release even more of their juice. Cook for 8 to 10 minutes, then remove from heat.

Spoon tomato mixture into a 9-inch ovenproof dish. Place the pastry round on top, folding under any edges, if needed.

Bake until the pastry is golden-brown, about 20 minutes. Remove from oven and let stand for 5 minutes. Run a knife around the pastry to loosen it from the pan. Invert a large plate over the top and, using a cloth, carefully and quickly flip the tart onto the plate. Rearrange any tomatoes that may have fallen out of place. Garnish with fresh basil leaves and serve warm or at room temperature, cut into wedges.