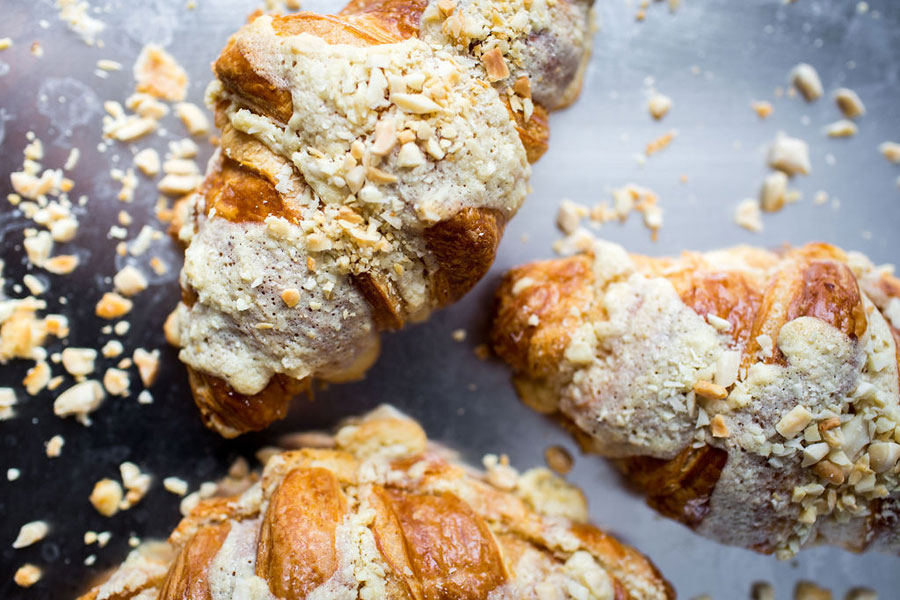 In Syrian households, bread and salt are the first things proffered to guests as a gustatory prelude to friendship. So when pastry chef Kira Desmond and her business partner Firas Daker decided to open an East-meets-West bakery and restaurant in Mississauga, Ont., they wanted to capture that spirit of congeniality. Hence the name Bread and Salt Bakehouse.

Desmond, a native of Calgary who trained in baking and pastry arts at the Culinary Institute of America at Greystone in California, is co-owner, executive director and the baking brains behind the new venture.

She spent a lot of time in the Middle East in her previous job as corporate chef for the Mississauga-based dipndip Chocolate Café, which was co-founded by Daker, and has outposts in Syria, the UAE, Lebanon, Jordan, Kuwait, Saudi Arabia, Oman and Qatar, among other international locations.

“I’d been going there for years, spent time in the culture and fell in love with the food,” Desmond explains.

Located in a low-slung, red-brick building in Erindale, the retail section in the Bread and Salt Bakehouse includes all sorts of Middle Eastern fare, including jars of a Tunisian ratatouille-like spread, pomegranate molasses, rose water and premium dates.

The bread section features saj bread, an unleavened Arabic flatbread, as well as plain and whole wheat pita, baguettes, sourdough and focaccia. Bread and Salt distributes about 4,000 preservative-free pitas a day seven days a week all over the Greater Toronto Area.

The bakery sells all sorts of sweet treats, including bouza, the Middle Eastern ice cream made from traditional custard of milk, cream, eggs and sugar, with the addition of mastica, the dried resin of a pine-like tree, and sahlab, the dried and ground root of a wild orchid. These natural thickeners give the confection, which is rolled into a log and can incorporate layers of chopped pistachios or even Oreo cookie crumbs, its stretchy, springy texture.

But the star of the show is manousheh, a popular Middle Eastern street food often eaten for breakfast. The dough can be shaped into a flat disc and topped with aromatic spices such as house-made za’atar, a mix of wild thyme, sumac and sesame, or fashioned into a triangular pocket called samboussek. The wild mushroom version comes with a black garlic béchamel, as well as parsley, arugula, roasted garlic, goat cheese and mozzarella.

“The idea was to craft a concept that was East meets West and integrating traditional Middle East ingredients but making things innovative and contemporary,” Desmond says.

Desmond’s recipes use weight measurements instead of volume, allowing for more baking precision. The following recipes have been adapted for home cooks, but I’ve left the weight measures in for those who own good kitchen scales.

Lemon and Olive Oil Cake with Raspberries and Rose Water

As pleasing to the eye as it is to the palate, this lemony cake is scattered with rosewater-tossed raspberries, which perfume the batter. I baked them in two 24–mini-muffins tins, which yielded 48 two-bite cakes, but you can also uses mini-loaf pans (makes approximately 10) or one large loaf pan.

Oil or butter for greasing pans

Preheat oven to 330 F and oil or grease pans.

In a medium bowl, sift flour and baking powder together. Set aside.

On lowest speed, add milk and scrape down bowl again.

Add flour mixture to wet ingredients and mix on low until just incorporated.

Using a spatula, add in butter, oil and lemon juice in five additions, mixing gently by hand and making sure to scrape the bottom of the bowl.

Toss raspberries in rosewater. Divide batter into pans and top with raspberries.

Bake for about 20 minutes on middle rack of the oven, rotating pans halfway through, until sides are golden brown and fully cooked in the middle. Cool on racks.

Whisk ingredients for glaze together until well blended. Take cakes out of pan and drizzle with glaze.

This soft cookie gets a sweet boost from the addition of dates. I used a 300-gram bag of mixed dried fruit called a baking blend that contained raisins, dates and cranberries. This recipe makes 48 three-inch cookies.

Using the paddle attachment of a stand mixer, cream butter with both sugars. Add vanilla and eggs in two to three additions, scraping down the bowl in between.

In another bowl, sift flours together and mix in the rest of the dry ingredients. Stir in dried fruit until combined.

Scoop about 3 tbsp of cookie dough at a time onto parchment-lined sheets, leaving an inch in between. Top each scoop with three slices of dates. Bake about 12 minutes or until edges are brown. Let cool on wire racks and store.

Scoops of cookie dough can be frozen. Bake from frozen at 335 F for about 15 minutes.