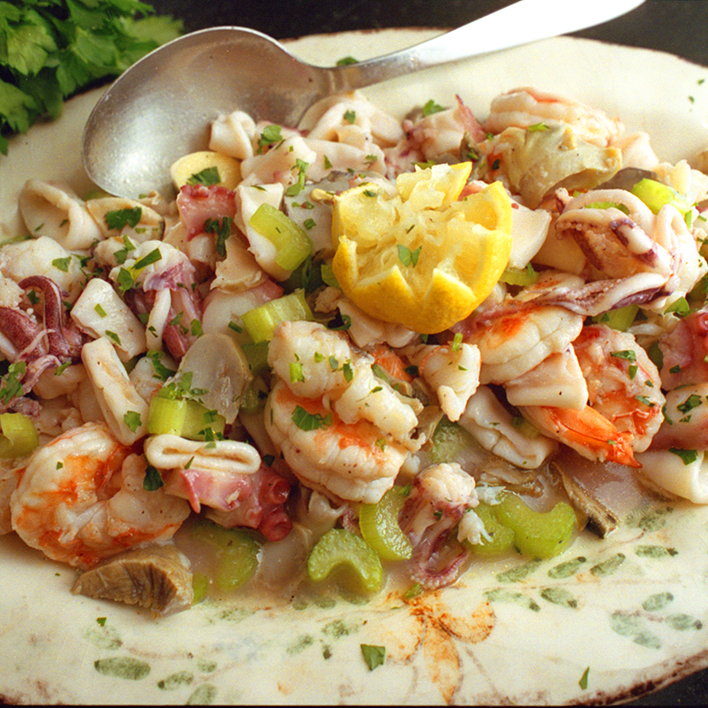 Dishes like seafood salad, called insalata di frutti di mare in Italian, were a culinary staple in author Daniel Paterna’s neighbourhood and are featured in his new cookbook 'Feast of the Seven Fishes.' Photo: Courtesy of Daniel Paterna

Some of the handwritten notes scrawled across the small, discoloured index cards are barely legible, and you can just make out individual words like “garlic,” “eggs,” “cheese” and “sauce.” On others, the notes are typewritten: “At Xmas buy 6lbs octopus. Peel skin off head of octopus.” These Italian recipes represent a culinary legacy from Anne Paterna, a first-generation Italian-American born in the house her Neapolitan father built in the Bensonhurst section of Brooklyn in 1926.

“My mom’s recipe cards [have] remained on our kitchen tables through the decades. And they always fascinated me,” Daniel Paterna, 61, recalls in a recent phone interview. “She’d make notations every year when it was time to celebrate a festive holiday. And to me they were like Mozart’s manuscripts.”

The recipes represent not only Paterna’s familial heritage in Naples but the traditions that grew out of the Brooklyn neighbourhood where his grandparents planted their roots. And it’s also the foundation of Paterna’s cookbook Feast of the Seven Fishes: A Brooklyn Italian’s Recipes Celebrating Food and Family. (Paterna provided four recipes from the cookbook, which you can find at the end of this story.)

Paterna, a photographer and founder of a Brooklyn-based design group, created Feast of the Seven Fishes to celebrate the culinary heritage of his family and immigrant neighbourhood while dispelling the pop-culture myths of his home turf swarming with mobsters and wise guys. To that end, he recalls meat, fish and produce shops he visited with his parents as a kid — some lost to gentrification — serving as “the museums of our culture.”

Feast of the Seven Fishes is a time capsule containing a mix of family and community history, with vintage photos of the Paterna clan along with shots of the author at present-day shops that keep the old traditions alive. And then, of course, there are the meals gleaned from those cherished recipe cards,  everything from stuffed artichokes and lamb shank soup to mouth-watering pastas, pizza, pastries, seafood and, of course, sausage and peppers. Traditional Christmas Day tomato sauce and Easter bread are also on the menu, along with other holiday-specific foods for those who like to make something new for special occasions.

Paterna felt compelled to preserve his familial traditions for future generations when he became a parent himself. His mother, Anne, whose recipe cards helped inspire the project, died in 2013 at the age of 84, just as he began to develop the book.

One of the biggest challenges when compiling a cookbook of family recipes is converting old-school means of measuring ingredients — eyeballing, tasting or feeling the ingredient to judge the proper amount — to numbers.

“Oh my God,” Paterna exclaims with a laugh, going on to talk about his mom’s meatball recipe. “God rest her soul, her meatballs are still better than mine. [And] I went by her recipe card.” It is here that Paterna returns to his classical music metaphor.

“It’s like Leopold Stokowski interpreting Bach’s music for The Sorcerer’s Apprentice movie,” he explains. “He revised a lot of the Bach music to become sort of more substantial in a sense. That’s what I equate these recipes that I’ve presented. It’s up to you to conduct them as you see fit, whether it’s a little more, a little less.”

Seafood salad that we wait all year for. Serves 8 to 10.

Fill a 6-quart pot with water. Add salt and bay leaves and bring to a boil over medium-high heat. Holding the octopus by the head, dip the tentacles quickly in and out of the water 3 times. After the third time, immerse the whole octopus, cover, and boil for 30 minutes. Turn off the heat and leave the octopus in the covered pot of water for another 30 minutes.

Remove the octopus from the water and set it on a board to cool. With a clean towel, wipe off as much of the thin layer of skin as possible. Cut into 1/2-inch slices.

Rub a large bowl with cracked clove of garlic. Place all of the cooled seafood in the bowl. Add salt, half of the lemon juice, remaining clove of garlic and mix well. Cover and marinate in the refrigerator for 12 hours, stirring occasionally.

Serve on a platter garnished with cut lemons. You will want a yearly invite.

Trim any black or discoloured leaf ends from the escarole. Fill a large bowl of fresh water and immerse the head of escarole upside down. Slowly dunk up and down several times to dislodge soil  between leaves.

Drain the escarole upside down for about 30 minutes. Once the excess water has drained, carefully remove some of the base at the end of the stalk, making sure the leaves remain attached.

Spread the escarole open so you can see the lighter green centre leaves. Mix all of the stuffing ingredients in a bowl and add abound to the centre heart of the escarole, gently spreading it flat. Carefully gather all of the leaves to close the escarole back to its natural shape and lay it down on its side.

Make a large slipknot with twine and place it around the escarole about 3 inches from the base, pulling firmly to close. Continue wrapping the twine tightly around the head in a crisscross pattern until you reach the top. Tie off the twine.

Place the oil in a skillet over low heat. Add the cracked garlic and lightly brown it on both sides. Carefully place the wrapped escarole in the skillet. Cover the skillet and steam the escarole for 25 to 30 minutes or until it is very tender and pierces easily with a fork. Remove the twine, slice in half lengthwise, and serve in a shallow bowl.

Pasta with beans—the brick and mortar of my culinary life. Serves 4.

Heat the olive oil in a 2-quart pot over medium-low heat. Add garlic and sauté just until it begins to turn golden. Add celery and sauté for another minute.

Add beans and broth and bring to a boil. Reduce the heat to low and simmer for 30 minutes. Season to taste with salt and pepper.

Bring a large pot of water to a boil. Add salt and pasta, bring back to a boil and cook until the pasta is al dente. Strain the pasta, saving a cup of pasta water. Place the pasta back in the pot, fold in bean mixture, adding some of the pasta water to make a slightly soup-like consistency.

Stuffed squid or, in Neapolitan, calamari imbottiti. Serves 8 to 10.

Heat oil in a large 6-quart pot over low heat. Add garlic and sauté for 1 minute. Add wine and simmer until the alcohol cooks off. Stir in the tomatoes, tomato paste and salt. Raise the heat and bring to a quick boil. Reduce the heat to the lowest level and simmer slowly while you stuff the calamari.

Using a teaspoon, fill the body of each calamari to a little more than half full. Be careful not to overstuff them as the calamari will shrink dramatically while they simmer in the sauce.

Using round toothpicks as skewers, attach the tentacles to the body through the opening. Make sure it is a snug attachment, then set aside. Apply the same process to the all the calamari.

When all the calamari are stuffed and the tentacles attached, gently place them into the sauce one by one. Cook in the simmering sauce for approximately 45 minutes or until they are tender when pierced with a fork.

Carefully remove the toothpicks. Serve as a meal. Use the sauce on a plate of linguine as a first course, then serve stuffed calamari as a second course.

A Nostalgic Journey to Italy, the Land of Our Grandmothers

Plant-Based Diet: Please Your Palate With These Warming Soup Recipes

From Farm to Fork: Try These Recipes for Brunch