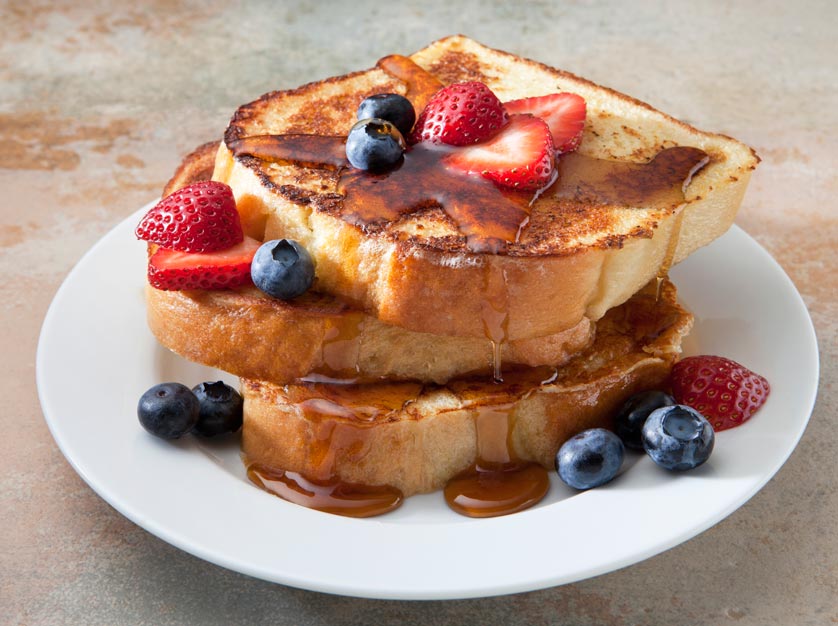 Brunch just got better with these tasty recipes for what may be the ultimate comfort food.

As if an oven-baked French Toast recipe, in all its golden puffed greatness wasn’t delicious enough, Chef Lisa went ahead and outdid herself by adding an easy homemade caramel sauce and sweet crumble topping. Not only is this decadent dish a guaranteed crowd pleaser, but it’s also great on the host, a stress-free dish that can be assembled a day in advance and baked off just before guests arrive.

1) For the caramel sauce, make sure your ingredients are measured out and ready. In a medium, heavy bottomed saucepan, add sugar over medium heat. Once the sugar starts to melt, start whisking and continue to whisk until it is completely melted. Once melted, stop whisking and allow the sugar to cook to a deep amber, caramel color. Immediately add the butter and whisk until it is incorporated. Remove from heat and slowly stir in the cream and salt. Pour into a glass bowl or jar and allow to cool to room temperature.

2) For the crumble topping, in a medium bowl, combine flour, brown sugar, cinnamon and salt. Add butter and mix in with your fingers until the mixture resembles pea-sized chunks. Set aside.

3) For the French toast, coat a 13×9-inch baking dish with non-stick cooking spray. In a large bowl, whisk together milk, cream, sugar, eggs and vanilla extract. To assemble, place half of the cubed bread in the bottom of prepared baking dish. Pour half of the milk mixture evenly over the bread. Sprinkle with half the crumble topping and pour half the caramel sauce over top. Repeat with remaining bread, followed by the remaining milk mixture and finish with the crumble topping and caramel sauce. Cover and refrigerate for several hours or overnight. When ready to bake, remove from refrigerator and preheat oven to 350ºF. Bake for 45-50 minutes or until set and golden brown.

Mary Poppins played a game with kids called “Well Begun is Half-done.” Ain ’t that the truth. Easily assembled, this decadent French toast soufflé soaks overnight and is finished by topping it with candied Rice Krispies, drizzling it with caramel sauce and baking it to a golden dome. Yes, you get a spoonful of sugar in every sticky, scrumptious bite.

1) For the candied Rice Krispies, in a large pot (that is both deep and has a wide bottom), bring the sugar and water to a boil over medium heat. Boil for 1 minute without stirring. Gently stir in Rice Krispies and continue to cook over medium heat, just until they are golden, about 5 minutes. Remove from heat and immediately pour Rice Krispies onto a baking sheet to cool. Once cooled they can be stored in an airtight container for up to 2 weeks.

2) For the French toast, coat a 13×9-inch baking dish with non-stick cooking spray. Place cubed bread evenly throughout the dish.

3) Place the cream cheese in a large bowl. Using an electric mixer, beat cream cheese at medium speed until smooth. Add one egg at a time, mixing well after each addition and making sure to scrape down the sides of the bowl with a spatula. Whisk in milk, half-and-half, maple syrup and vanilla until incorporated and smooth. Pour over bread cubes to moisten evenly, pressing lightly to submerge the bread. Cover and refrigerate at least 8 hours and up to 24 hours.

4) Once ready to bake, remove baking dish from refrigerator and preheat oven to 350°F.

5) For the caramel topping, in a small saucepan, combine brown sugar, butter and corn syrup. Cook over medium heat, stirring constantly until well combined, about 2 minutes. Immediately pour over French toast and cover with candied Rice Krispies. Place baking dish on a rimmed baking sheet and bake until puffed and golden, about 40-45 minutes.

What happens with a cinnamon bun collides with French toast? This recipe for scrumptious Cinnamon French Toast Sticks, bread that is rolled up around a sweet cinnamon and brown sugar mixture, sautéed until golden and sprinkled with, you guessed it, more cinnamon sugar. Talk about a breakfast bonanza!

2) Using a rolling pin, roll out crustless bread slices until thin. Spread a layer of the sweet cinnamon filling on each slice and roll up tightly.

3) Melt butter over medium heat in a large non-stick pan. Dip each roll into the egg mixture and place in the pan, cooking in 2 batches if pan isn’t big enough. Saute for 1-2 minutes per side, until the outer layers is golden and crisp. Remove from heat and sprinkle with cinnamon-sugar mixture. Serve with maple syrup.

Strawberry Fields are Forever so why not whip up a brunch recipe that’ll have everyone raving…forever? This easy and foolproof streusel-topped French Toast Souffle, finished with a homemade strawberry sauce is a guaranteed success, not a one-hit-wonder!

2) Once ready to bake, preheat oven to 350ºF. To prepare the streusel, using a food processor, combine butter, flour, brown sugar, oatmeal, cinnamon and salt. Pulse on and off until combined and mixture still has a few pea-sized chunks.
Place mini casserole dishes on a baking sheet. Sprinkle crumb mixture evenly over top. Bake for 30 minutes, until topping is golden brown.

3) While the French toast bakes, prepare the strawberry sauce by combining strawberries, water and sugar in a medium saucepan over medium-low heat. Stir occasionally, until berries get soft, about 10-15 minutes. Remove from heat, cool slightly and stir in vanilla extract. Serve sauce over top each French toast soufflé.

Take a big bite out of mornings with this easy and crowd-pleasing Pumpkin French Toast Bake, a delicious brunch dish.

1) For the crumble topping, in a medium bowl, combine flour, brown sugar, sugar, pumpkin pie spice, cinnamon and salt. Add butter and mix in with your fingers until the mixture resembles pea-sized chunks. Set aside.

3) To assemble, place cubed bread in the bottom of prepared baking dish. Pour pumpkin mixture evenly over the bread. Sprinkle the crumble topping over top. Cover and refrigerate for several hours or overnight. When ready to bake, remove from refrigerator and preheat oven to 350ºF. Bake French toast for 50-55 minutes, or until set and golden brown. Let cool slight before serving.

Don’t be put off by the word “soufflé.” There’s nothing complicated or intimidating about this amazingly delicious and impressive brunch dish – all you have to do is sleep on it. Yes, sleep on it. This easy overnight French toast does all the work for you, as the sweet egg bread, mounded with cream cheese and strawberry jam, is left to soak up a buttery mixture. When you wake, you bake this soufflé and ta-dah, a sweeter dream was never had!

1) For the soufflé, coat a 13×9-inch baking dish with non-stick cooking spray. Lay a single layer of bread slices along the bottom of the dish. Spread cream cheese on each piece. Spread strawberry jam on the remaining slices and lay to face cream cheese, creating sandwiches in the baking dish.

2) In a medium bowl, whisk eggs, egg whites, milk, melted butter, sugar, vanilla and salt. Pour over sandwiches and turn to coat. Cover and refrigerate for several hours or, for best results, overnight. Bring to room temperature before baking.

4) For the berry sauce, in a medium saucepan, combine sugar and cornstarch. Stir in orange juice until smooth. Add frozen mixed berries and heat to a boil over medium heat stirring constantly until slightly thickened. Remove from heat and stir in fresh strawberries. Allow to cool and serve berry sauce spooned over individual portions.

Vive le French toast! Oui, I know that it’s neither French nor toast but I wanted to make this battle cry in honor of my sister. No one amours French toast quite like Lisa, and when given carte blanche (by moi, of course), she took her favorite comfort food to new heights. Stuffed with caramelized bananas and topped with brown sugar streusel, this French toast bake hits all the right notes. Perfect for company because it’s prepared in advance, this crowd pleaser has a golden crisp crust and sweet, soft banana center. French toast never tasted so delicieux. Encore! Encore!

1) Coat a 13×9-inch baking dish with non-stick cooking spray. Slice bread into ½-inch thick slices. Arrange half of the slices in prepared dish. The bread can can overlap a little.

2) For the caramelized bananas, in a medium saucepan, combine brown sugar, butter and corn syrup over medium heat. Cook and stir until butter is melted and brown sugar dissolved. Add cinnamon and sliced bananas cooking for 2 minutes. Evenly cover bread in baking dish with banana mixture. Top with remaining slices, squishing to fit them in.

3) For the batter, in a medium bowl, whisk eggs, milk, sugar, vanilla, cinnamon and salt. Pour over bread, cover and refrigerate 4-24 hours.

5) For the streusel topping, in a medium bowl, combine oats, flour, brown sugar and butter, mixing with a fork or fingers until crumbly. Set aside.

6) Place French toast in oven for 40 minutes. Remove and sprinkle with streusel topping. Bake 20 minutes more or until golden and puffy. Let stand 10 minutes before serving.

This deliciously decadent recipe for S’mores French Toast will have you singing Kumbaya by the campfire. With graham cracker crumbs, and oooey-gooey melted chocolate and marshmallows, this recipe is going to be a family favourite! Authors of bestselling cookbooks Bite Me, Bite Me Too and Lick Your Plate, saucy sisters Julie Albert and Lisa Gnat love eating, feeding, entertaining and dishing up easy recipes at BiteMeMore.com.

From Farm to Fork: Try These Recipes for Brunch

Recipes: 6 Ideas for a Lazy Brunch