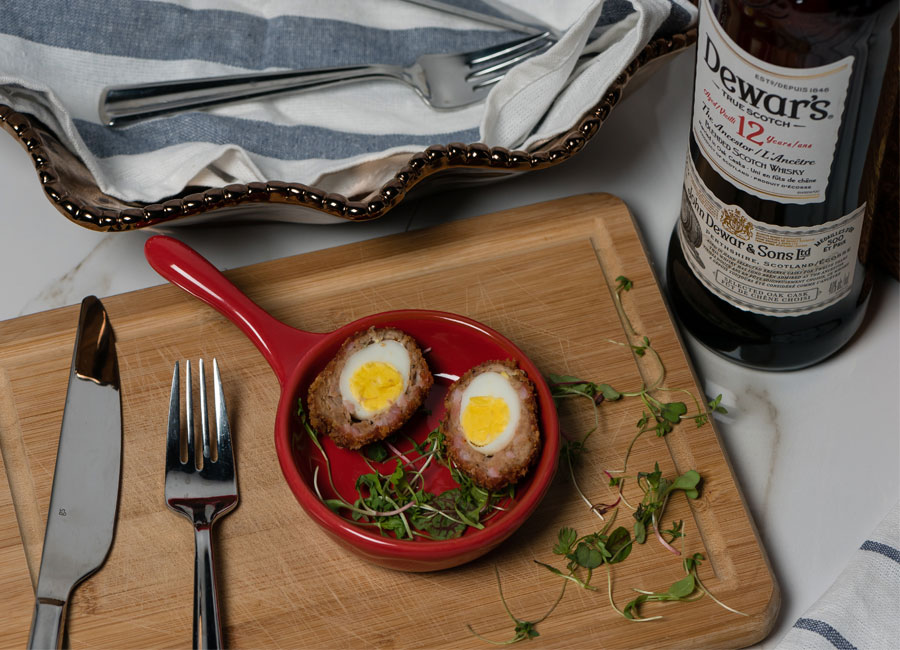 Celebrate your inner Scots with cocktails and snack recipes for Robbie Burns Day!

Every 25th of January, Scots – and those that want to be Scots – celebrate the lauded poet with a bit of Auld Lang Syne (yes, he wrote that) a wee dram of whisky and a whopping of jocularity and camaraderie. Kick off your own Robbie Burns Day celebration with a poetry reading and be sure to check out the virtual  online concerts from the Celtic Connections Festival, which presents over 30 online performances, including the hotly anticipated Transatlantic Session coming out of Quebec and Nashville on January 29.

Here, a few whisky cocktail and scotch egg recipes from the spirits experts at Dewar’s. Sláinte!

Using a wooden muddler, muddle the fresh ginger in the bottom of a cocktail shaker until it is well mashed. Add the blended Scotch, lemon juice and honey syrup, and fill shaker with ice.

Shake until well chilled (about 20 seconds).

Strain into an ice-filled rocks glass (you may wish to double strain through a fine tea strainer to remove the small flecks of ginger), spray a smattering of Islay Scotch over the top and garnish with candied ginger.

Stir and strain. Pour into a rocks glass over ice – large cube preferable.

Add all ingredients (minus crème de mure) to the glass.

Fill with crushed ice and stir.

Top with more crushed ice and then drizzle crème du mure on top.

Garnish with a fresh blackberry

A generous grating of nutmeg

These are surprisingly good. The crisps add a great crunch to the outside. The whisky flavour in the sausage-meat is subtle but present and the addition of smoked paprika, chilli and black pepper lend the whole thing a rather nice a kick. Serves 4

Of Celts and Clans – Scotland