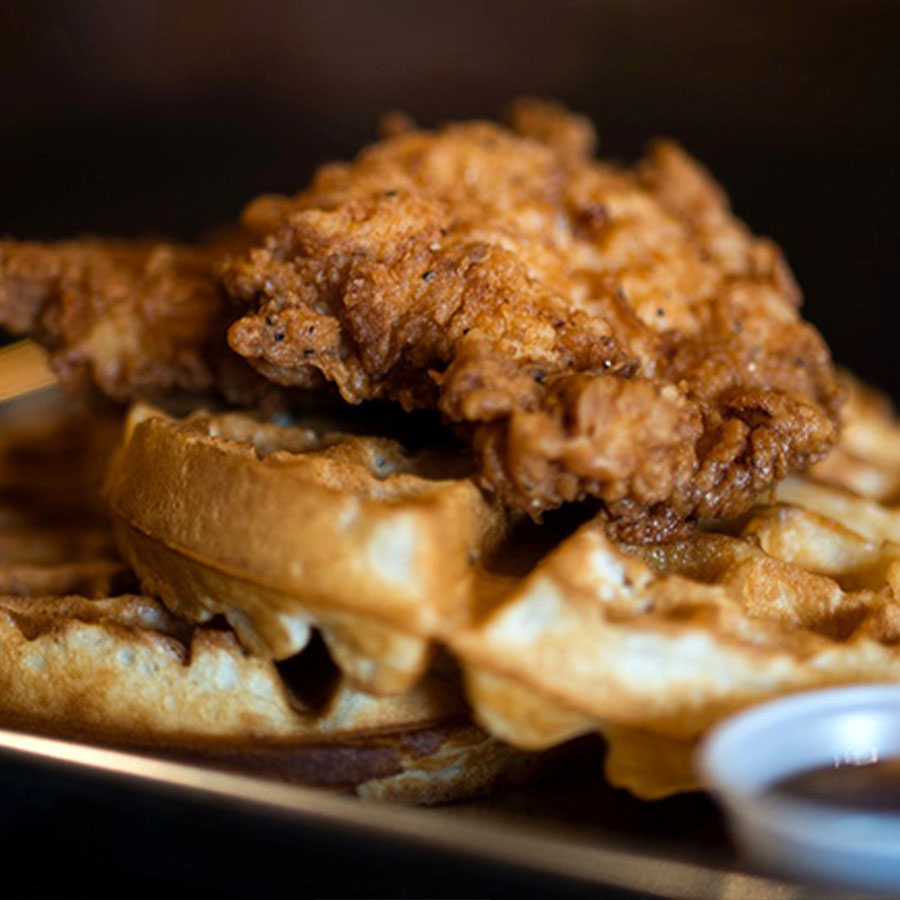 The days may be getting longer, but with all that’s still going on, we’re still craving comfort food. And, in celebration of International Waffle Day, we’re sharing a recipe from our friends south of the border.

The original waffles were brought to the United States by Belgian immigrants. The now classic breakfast food made its debut in New York City in 1620.

So, while we wait for international travel to resume, we can take an armchair traveller’s tour of some of the USA’s top waffle-eating spots. Whether you’re a sucker for a classic with maple syrup or itching to try a more inventive take, these top waffle spots are taking tastebuds to the next level.

From his coastal restaurant in Norfolk, Virginia, My Mama’s Kitchen, Chef Stevenson taps into his family’s southern roots to create this ‘Ultimate Chicken ‘n Waffles’ dish. This fluffy Belgian-style waffle is topped with chicken, fried bacon, and walnuts, and finished with a drizzle of hot maple syrup. To mark the occasion, he’s generously sharing his now not-so-secret recipe with us.

In the bottom of a mixing bowl, whisk flour, sugar, and salt together. Create a well in the centre and add remaining wet ingredients: milk, eggs, melted butter and vanilla. Whisk  until batter has formed and then stop. Try to not over mix.

Plug in your waffle Iron to preheat. Brush both sides of the hot iron with melted butter  and pour in your batter. Cook waffles according to the recommended cook times for  your particular iron.

In a frying pan cook chopped bacon to desired crispiness, remove from the pan. Pour  out bacon fat until 1-2 tsp are left, throw in the chopped walnuts and cook until lightly  toasted and add 1/3-1/4 cups of maple syrup, after 3 min add bacon and spoon the  maple syrup, walnut, and bacon topping on top of the chicken bites and fresh waffles.  Add powdered sugar if desired and enjoy!

A Cross-Country Waffle Tour of the USA

Iron Paffles & Coffee in Charlottesville, Virginia: Female owned and operated. Katheryn Matthews takes her signature all-butter puff pastry and bakes it on a waffle iron. The result is a mix between a pastry and waffle that’s both crispy and flakey. She then takes two ‘paffles’ and fills them with either  sweet or savoury fillings, the result is one seriously delicious sandwich.

Funk ‘N Waffles in Syracuse, New York: Not all late-night cooking experiments result in a wildly popular waffle shop, but for Kyle Corea and Adam Gold it did. Their biggest hit? The Jive Turkey, a Thanksgiving-inspired waffle is stuffed with smoked turkey, garlic mashed potatoes, gravy and served with a side of  cranberry sauce.

What The Waffle in Columbus, Ohio: Diners flock to Columbus’ Historic King Lincoln Distillery District for Gayle Troy’s buttermilk waffles. Light, crisp, and golden brown with a hint of sweetness, the waffles are soft inside and feature deep indentations to capture syrup. Troy also uses her expertise to give back to the community, providing work readiness skills to young women who have aged out of the foster care system.

Destroyer.LA in Los Angeles, California: This futuristic daytime spot located in the vibrant Culver City neighborhood serves some  of the most interesting food coming out of L.A. right now. The open-kitchen, all-white space serves many inventive dishes but its modern take on the waffle truly stands out.

Brunch of Champions: Try These Recipes for French Toast and Pancakes