Chef Marcus Samuelsson on Guiding His Restaurant Through the Pandemic, Plus His Recipe for Black Bass 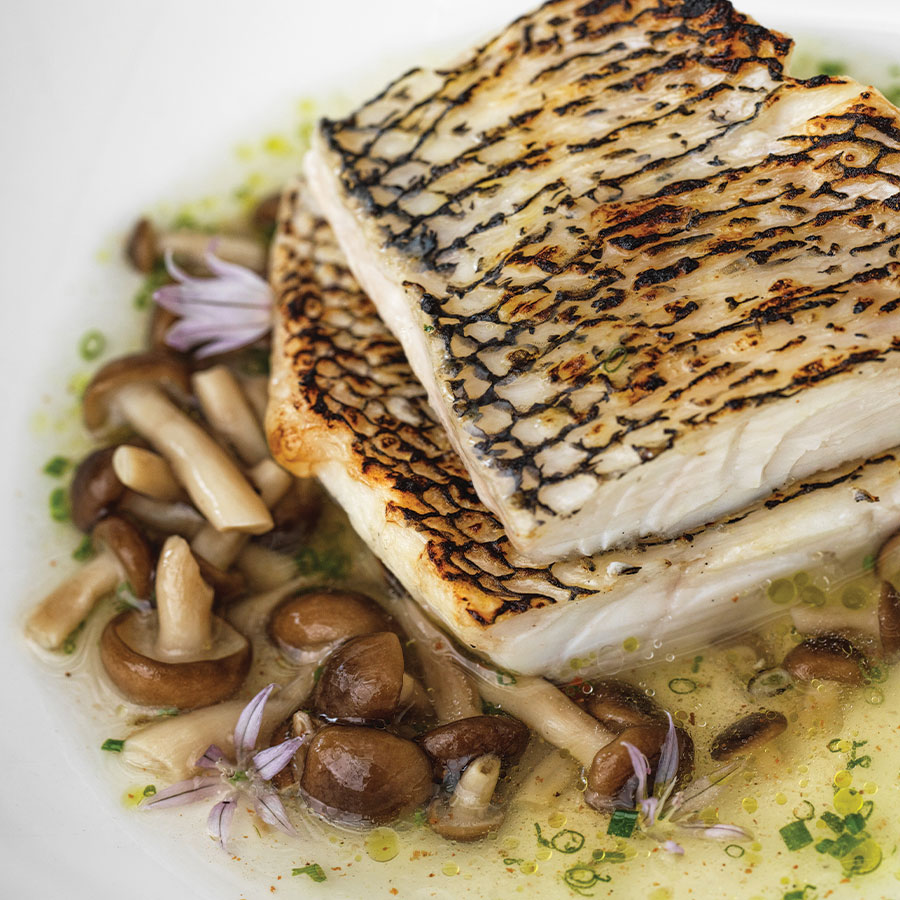 Chef Jason Morris says this dish showcases the fabulous texture of the black bass and the complexity of the mushroom dashi. Photo: Mickaël A. Bandassak

Montreal isn’t an easy fit for star chefs. With a deep pool of talented local cooks, it’s no wonder restaurants by Gordon Ramsay and the late Joël Robuchon failed to make their mark. Marcus Samuelsson, however, is bucking
that trend.

The 50-year-old chef was chosen to head the restaurant at downtown’s swank new Four Seasons Hotel when it opened in May 2019. And, despite pandemic setbacks, Marcus Restaurant + Lounge is going strong once again.

Born in Ethiopia and raised in Sweden, Samuelsson moved to the United States in 1994. The Manhattan-based chef counts 12 establishments in his restaurant group, from Red Rooster in Harlem and Miami, to Ginny’s Supper Club in New York, and Norda in Sweden, and is best-known for his modern take on African-American cuisine, although his cooking style is multicultural. His Montreal menu celebrates all facets of his cooking with marked emphasis on fish and seafood in an haute brasserie setting.

But right when the restaurant was turning into one of the city’s most happening venues, the pandemic hit. Not only did the restaurant close, twice, for several months at a time, Samuelsson couldn’t get across the border for his monthly visits until late September.

A press dinner this past October marked Samuelsson’s first visit to the restaurant since the lockdowns began, and also officially sealed a partnership with the new executive chef, Jason Morris. The Montreal native, who was hired in September 2020, made his name at two of Montreal’s most creative restaurants, Le Fantôme and Restaurant Pastel.

With a mutual admiration for both Nordic and Japanese cuisines, the Samuelsson/Morris menu features dishes from their shared experience. Morris says it’s not uncommon for him to tailor his courses to individual diners based on what they order from the menu, because it allows him to “educate them about the dish itself.” He loves cooking in the open kitchen so guests seated at the bar can see the effort he puts into their meals, like the black bass recipe he provided to us (below). “I believe creating memories,” he says, “and transferring knowledge is always best.”

The success of Montreal’s Marcus hopefully overshadows the notoriety from the latest Met Gala, the over-the-top fundraising event for the Metropolitan Museum’s Costume Institute that has a red carpet to rival the Oscars. To celebrate New York after a troubling year, Vogue editor-in-chief and gala chairwoman Anna Wintour reached out to Samuelsson to cater the event. The menu, overseen by Samuelsson and created by a group of 10 up-and-coming New York City chefs, was entirely plant-based: a first in the gala’s history. Of the hundreds of celebrity guests, one person — actress Keke Palmer — dissed the dishes on Twitter, and sparked a viral moment where people piled on with memes.

Yet Samuelsson doesn’t miss a beat defending the novel menu and his team. “The fact that Vogue asked me was something I did not take lightly. Two hundred people made that dinner happen. Amazing chefs. Out of more than 459 guests, one or two were not happy?” he says. “Criticism is great. The most amazing artists need that push and pull. But nitpicking in a year of COVID? I wish you well. Bonne chance. I’m proud of what we did.”

Gala drama aside, post-pandemic goals are Samuelsson’s priority. “COVID is the biggest event in our generation, collectively, and now we have to [ask], how do we approach this humbly? How do we improve the workspace? Our relationship with suppliers?” he says. “When people go out now, it matters, and only a restaurant can supply that kind of environment.”

It’s the electric ambiance in his Montreal restaurant that Samuelsson believes will help diners realize what they missed during 18 months of lockdown. So his goal is to get diners re-engaged in the experience. “That’s why I wanted an open kitchen here,” he says, “for people to see the theatrical part, the core of the place.” Open kitchen aside, the Atelier Zébulon Perron-designed dining room, with its black and white colour scheme, its magnificent terrasse and stunning views of downtown Montreal, is one of the most glamorous in the city.

And with Morris and a dozen cooks buzzing away in the kitchen serving up to 300 customers in the dining room and lounge nightly, his vision is well under way. “Jason brings that 40-seat Montreal craftsmanship to this large arena. I’ve learned a lot from him; we go back and forth,” says Samuelsson. “We have many similarities — a commitment to food, a curiosity for learning. And we’re having fun. I want to celebrate that.”

Executive Chef Jason Morris says this dish showcases the fabulous texture of the black bass and the complexity of the mushroom dashi. “It’s a simple dish, but with our fresh sourcing, the ingredients speak for themselves.”

A handful of pickled shimeji mushrooms

2. Add bonito flakes, then filter out after roughly 20 to 30 seconds.

3. Thicken slightly with a small
amount of cornstarch slurry (cornstarch and water).

5. Filet and score the skin side of
the black bass.

6. Marinate bass with skin side down in 1 part rice vinegar and 3 parts vegetable oil with thinly sliced garlic.

7. Cook fish under broiler until the skin is crisp and the flesh is barely cooked through; place in sauce. (Inside of fish should be warm but not overcooked, as it will continue to cook in the
warm sauce.)

8. Finish with olive oil to pearl the sauce.

1. Keep it simple, don’t stray too far away from your comfort zone and don’t forget to taste! I recommend preparing and serving large fish and large pieces of meat as they allow for even cooking and lend themselves well for large groups. Be generous, be adventurous with your side dishes and be sure to give out all your leftovers!

2. If all else fails, put your friends to work and get them to help out, that way if it doesn’t go as planned, you’re all to blame and it’s a great excuse to pull out the good wine you’ve been storing! Finally, always use the good china to set your table and serve your meal.