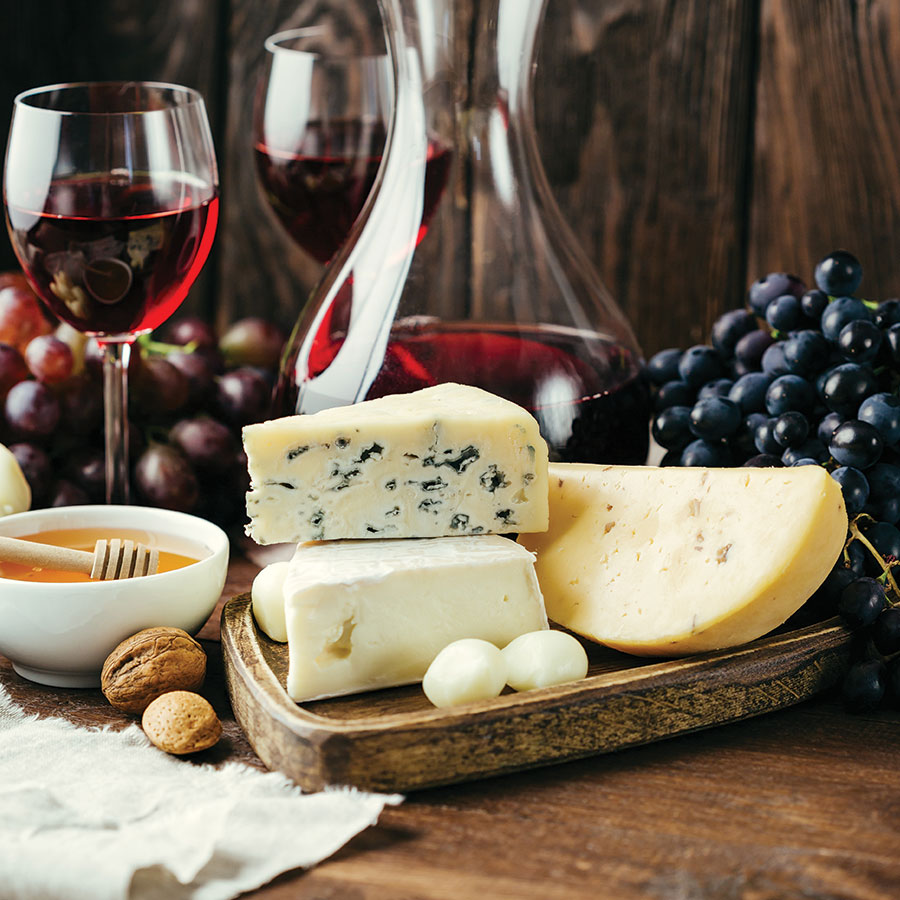 There has never been a better time to be inert. The once-pejorative designation of “couch potato” now instead points to someone with their finger on the pop-culture pulse, as multiple streaming services compete for eyeballs with an often-dazzling mix of original and acquired content across all genres. Really, the amount of viewable stuff on offer is staggering. And there’s always free-to-borrow DVDs at the local library with some also offering free streaming services. Plus, there’s video on demand.

Of course, one’s viewing selection is only part of an excellent night in, with food and drink combining to create the ultimate triumvirate. And since themes are fun, we humbly submit three: a buzzy recent film paired with something bubbly; a standout Canadian film paired with Canadian wine; and a classic film paired with a classic winery or varietal. In all three categories, we offer snack suggestions and high and low–end price points for wine because, sadly, they can’t all be $100 bottles.

Film: March 17 is, of course, St. Patrick’s Day, a perfect excuse to watch Irish films well into the weekend. The timing couldn’t be better. In just the last few years, the small nation has sent some extraordinary titles out into the world, many gathering acclaim at the bellwether Toronto International Film Festival, and beyond. Go past The Commitments. Here are four small, recent-ish and highly recommended titles to explore.

The Dig. Actor Moe Dunford is achingly sad as an ex-con returning to his small, perennially muddy village after serving time for a murder he can scarcely remember committing. To redeem himself, he joins the search for his victim’s unmarked grave. Twists unfurl.

Rosie. Moe Dunford again, this time opposite Sarah Greene as an upstanding young couple desperately trying to navigate a sudden, calamitous tumble, along with their four children, into homelessness. Novelist Roddy Doyle wrote the heart-rending screenplay inspired by the headlines.

Calm With Horses. Director Nick Rowland’s intense thriller about a crime family’s trusted strongman who desperately wants to go straight despite pressure to step things up is a must-see. Barry Keoghan — perhaps best known for the equally intense The Killing of a Sacred Deer — is palpably unsettling as a scion with a grudge.

A Bump Along the Way. When a carefree, mid-life single mom finds herself accidentally pregnant, she and her prim teenage daughter must learn to manage the circumstance, and each other, in director Shelly Love’s tender comedy and feature debut.

Indulgent: Cabernet Franc. Rather like the Irish themselves, this versatile grape has made a name for itself around the world, flourishing in vineyards across North and South America, Europe, and South Africa and anchoring Bordeaux/Meritage blends alongside Merlot and Cabernet Sauvignon. Peppery fruit notes are underpinned by a slight smokiness, which make it a great pairing with anything grilled. Decent Cab Francs can be had for as little as $20 with prices soaring north from there. Let your budget be your guide.

Snack Options: Grilled Caesar Salad is a thing, offering a delicious blend of crispy, slightly charred romaine with homemade croutons and rich dressing, easily made vegan if desired. Plus, spring is officially on the horizon, so why not dust off the barbecue? There are loads of recipes out there, go wild.

Film: The Ice Road. Filmed in Manitoba and starring Irishman Liam Neeson (see what I did right there?), this actioner from 2021 probably isn’t the best movie you’ll see this year. But it has its graces, namely, highlighting the white-knuckle profession of ice-road truckers who traverse roads that only exist part of the year when lakes are frozen over. Fast-melting roadways ratchet up the tension as Neeson and a misfit crew attempt to deliver wellheads to save miners trapped inside a collapsed mine before the arrival of spring cuts access to the site.

Indulgent: Inniskillin Riesling Icewine. Nothing says Canada quite like wine made from frozen grapes. While the small yield of juice from the fruit and the labour required to harvest it makes icewine comparatively expensive, it is also consumed in smaller quantities than your basic table wine. And it’s glorious, reflecting as it does the abundant ice on view in the film.

Wallet-Friendly: Also, Inniskillin Riesling Icewine, which can be purchased in 50 ml single-serving bottles in addition to standard 200 ml and 375 ml sizes.

Snack Options: Though super-sweet icewine is typically paired with desserts, Riesling Icewine in particular pairs phenomenally well with blue cheese. (No, really, it does.) If blue cheese is not your thing, icewine is also lovely drizzled over fruit salad or ice cream. Alternatively, pink icewine made from Cabernet Franc grapes tastes rather like strawberry jam, making it a brilliant complement to dark chocolate served in any form. Inniskillin also makes excellent Cab Franc (and Vidal) icewines, which should be served cold from the fridge, not the freezer.

Film: ’71. Vintage in setting if not date of release and superb, this chilling 2014 drama stars Jack O’Connell as a young British soldier accidentally separated from his unit following a riot on the chaotic and violent streets of Belfast during The Troubles. His survival depends on locals who can look past his uniform to see a human being. But not everyone roaming the streets is benevolent.

Indulgent and/or Wallet-Friendly: I will freely admit that this is the loosest possible reason for recommending a wine, a particular challenge given that St. Patrick’s Day is typically linked to beer and whisky. But Sauvignon Blanc, with its brightness, acidity, and slightly herbaceous, citrusy notes, always mentally conjures the colour green for me. So there, I did it. Many regions produce excellent Sauvignon Blanc, with New Zealand a particular favourite among New World aficionados, notably wines from its famed Marlborough region. Kim Crawford, Oyster Bay, and Stoneleigh are strong and affordable choices, widely available. Chile also produces a host of wallet-friendly, easily quaffable Sauv Blancs.