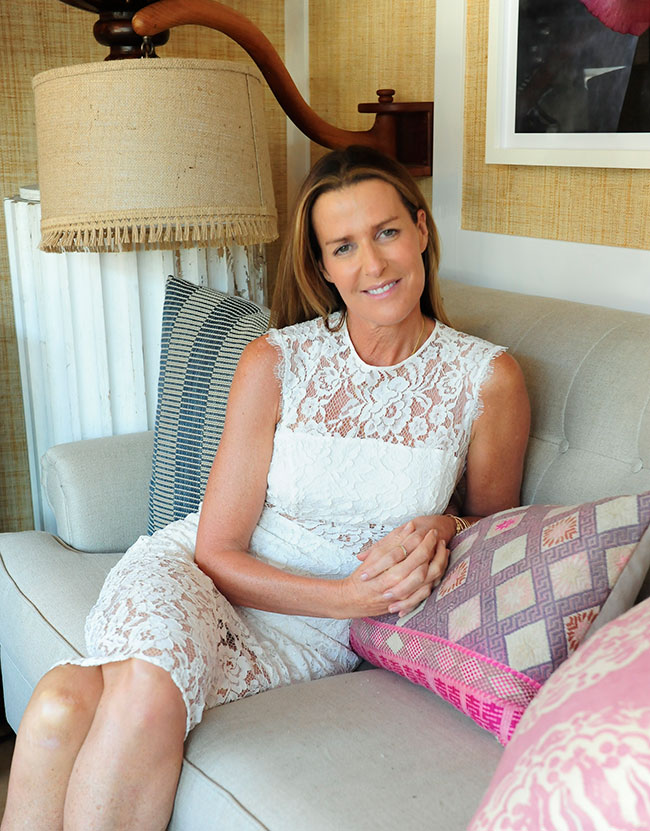 At first blush, a coffee table book on entertaining feels incongruous during a pandemic. But lifestyle entrepreneur India Hicks has always known that her very particular brand of bohemian glamour — her adjacency to design royalty and real royalty, her sun-kissed, photogenic, laid-back, Caribbean lifestyle — translates very well into book format in any climate. Thus we have India Hicks: An Entertaining Story, which arrived in stores last week.

We need not be troubled by our inability to actually fill those stunningly set tablescapes (this is the new, Instagram-friendly word for table settings, FYI). The fantasy settings and the eccentric and star-studded breezy little stories are oddly satisfying, especially right now.

Hicks lives in the Bahamas with her husband, David Flint Wood, and their five children, but talked to me by phone from England, where she was quarantining ahead of the book launch on Sept. 8. She tried to explain why someone as privileged and fabulous (my word, not hers) can still be relatable. “My life is actually rather chaotic and many women can relate to the chaos. My life is far from perfect. I get many things wrong. I also feel that I don’t take it all too seriously and I try very hard to have a sense of humour about most things.”

This tome is part of Hicks’ visual storytelling tradition. She has published three previous books of similar format: Island Style and Island Life chronicled her then-young family on their gorgeous Harbour Island property northwest of Eleuthera, Most recently was 2018’s A Slice of England, about her new country house in Oxfordshire, and the legacy of the very grand English homes she grew up in.

The context of Hicks’ background is an intrinsic part of every story she tells. The daughter of Lady Pamela Hicks, who was a bridesmaid to the Queen, and David Hicks, the celebrated interior designer who brought bold mid-century verve, clean lines and vibrant colour to the great drawing rooms of England, she is also the granddaughter of Earl Mountbatten of Burma, the last viceroy of India, who was assassinated by the IRA in 1979. That makes her somewhere around 700th in the line to the throne (give or take a few new babies on the list).

We know from The Crown how close Prince Charles was to Mountbatten; the future king is Hicks’ second cousin and also her godfather. That led to Hicks’ early turn in the spotlight as a bridesmaid to Princess Diana.

As a young globetrotting model, wanderlust led her to the Caribbean island where her family once had a vacation home. After settling there more than 25 years ago, she continued their English traditions, chief among them the importance of sitting down together and sharing meals. The conversation, says Hicks, “was the most important thing.”

Like her mother, who once exploded a can of spaghetti she was trying to heat up (but hadn’t opened, a charming snippet in this book), Hicks does not cook. “I have a marvellous cook at home, we call her Top Banana. And I excel at ordering takeout and arranging it on a platter.”

This book reflects Hicks’ stronger skills — assembling and mashing up interesting people, decorating with imagination and the materials at hand, and throwing hierarchical seating plans to the wind. Thus we get an introduction by Brooke Shields, whose gift of zebra scarves was transformed to tablecloths. We get some juicy namedropping. “We once had Mick Jagger round for a drink, oh as you do,” an evening that ended with a game of Jenga in the sitting room when an unexpected storm rolled in.

David Stewart of the Eurythmics contributes his martini recipe. Indeed, Hicks hails the importance of cocktails as icebreakers, so important they start off the book, which is unconventionally organized and ends with her thoughts and reminiscences about the English breakfast.

We also get cameos from the King of Tonga, Lawrence of Arabia and “Amy and Aerin,” whose last names aren’t given, but we are left to assume she means Amy Astley of Architectural Digest and Aerin Lauder of Estee Lauder. You know, totally casual stuff here.

“The world we live in now, we are going to see a lot more of our mealtimes at home and back around that table,” says Hicks. “The backbone of the book is about family and getting together and making the time around the table as pleasant and successful as possible.”

Hicks has negotiated the emotional fallout from the 2019 failure of her eponymous accessories, beauty and fashion business. “It was an incredible six years and an amazing adventure and I learned so much and it broke my heart when it closed,” she says. “But now I know it would never have survived the pandemic, and I’m grateful we could close in a calm way.”

The experience, she says, has reinforced a valuable lesson for her, and for all of us, which also relates to entertaining. “Relax, it’s okay not to do it all and not to do it all perfectly. Mix it all up, go for fun and funky, leave the silverware tarnished, it will remind you of the generations that came before.”

Now that is relatable.

A good amount of any lettuce of your choice

Two large cucumbers thinly sliced with a potato peeler, a vegetable peeler, or a mandolin.

Half a red onion, thinly sliced

3 Ways to Simplify Your Approach to Healthy Eating