A Marvellous (and Meatless) Tasting Party 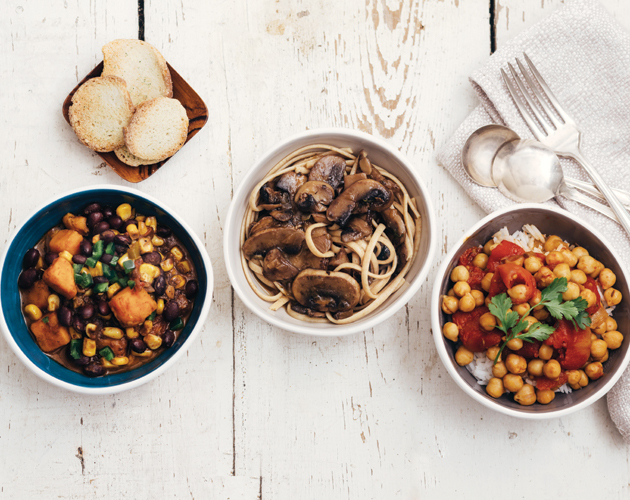 Think spring entertaining is all about pâté and beef skewers? Lighten up your menu with these three delicious recipes to extend your meatless repertoire beyond salads and sides.

If you had told me I could go nine days without eating meat or dairy, I would have said oh sure, maybe if I were stranded on a deserted island, but I wouldn’t have dreamed I could do so on a Caribbean island at an all-inclusive resort. How could any mere meat-loving mortal resist the aromas wafting from restaurants and open-air grills? And then there is the you-only-live-once mindset of such vacations, a mental passport to indulge.

But such was the challenge I faced when I joined a group – mostly boomers – who had signed up for a whole-food plant-based-diet immersion excursion in the Dominican Republic. Among the 45 of us, some were curious newcomers to the diet, a few were die-hards who had long since given up all animal-based foods, refined foods such as sugar and anything high in fat, including all oils, but most fell somewhere in between.

Every day, we attended lectures and cooking demos and ate only the dishes specially prepared for us.

For lunch and dinner, we feasted on a wide selection of salads, side dishes such as almond-creamed cauliflower and cilantro green beans, and mains that included all manner of beans and rice casseroles, veggie stews, stuffed wraps and cabbage rolls, curry concoctions and meat-lookalikes such as almond-encrusted eggplant “cutlets.”

At both the beginning and end of our trip, our weight, blood pressure and cholesterol levels were taken.

“We did the tests so everyone could see results in real numbers,” explains Dr. Shane Williams, the 43-year-old cardiologist from Bracebridge, Ont. (www.williamscardiology.com), who orchestrated the event. “To get people to change what they eat, it’s not enough to tell them they’ll feel better.”

Williams has been making waves in Ontario’s cottage country by advocating nutrition over medicine. Rather than taking what he claims is the go-to approach of many physicians – writing prescriptions and/or recommending surgeries – the affable Newfoundland native goes the extra step and introduces patients to the notion that food is health care, medicine is sick care and that nutrition alone can dramatically improve well-being. A radical position for any doctor perhaps, but certainly for Williams who was once a pharmacist.

“I have a healthy respect for drugs, not as a panacea but as a tool. But I recognize their many adverse side effects and I’m not surprised when many of my patients complain about the amount of pills they are taking.”

Williams switched to the plant-based diet five years ago after reading The China Study, a book which details the relationship between nutrition and disease, which inspired the controversial 2011 documentary, Forks Over Knives. The film (available on Netflix) argues that most degenerative ailments such as heart disease, Type 2 diabetes, joint pain and some cancers can be prevented or reversed by replacing the traditional Western diet with one comprising non-processed plant-based foods.

Day after day, our group sat spellbound as an all-star line-up of lecturers took the stage. Among them, the authors of The China Study, Dr. T. Colin Campbell and his son, Dr. Thomas Campbell II, as well as renowned researcher and surgeon, Dr. Caldwell B. Esselstyn Jr., who penned Prevent and Reverse Heart Disease and whose work was also featured in the documentary.

Studies were cited and claims were made: heart disease is a foodborne illness that can be wiped out if we change our diet; diet impacts all vascular ailments from dementia to erectile dysfunction; by consuming a wide variety of plants nearly all daily nutritional requirements can be met (leafy greens for calcium, all plants but especially legumes for protein); complex carbs, which are only found in plants (sweet potatoes, brown rice, quinoa, oats, corn, broccoli, carrots, etc.) are the preferred source of energy, not animal protein; refined and high-fat food injure the body; organics, while better, are not essential to healthy eating; and the reason most people continue to eat the Western way is because Big Industry such as beef and dairy has a role in shaping our food environment that is stronger than most people realize and has a powerful interest in promoting and protecting the status quo.

Not surprisingly, such claims have garnered push-back from the scientific community, but no one can argue our group results were impressive. Although there was no limit to how much we could consume and no mandate to exercise, on average, each participant experienced a weight loss of two pounds and lower blood pressure, and their LDL (bad) cholesterol dropped by a whopping 37 per cent.

Me? Well, I did manage to stick to the diet but I gorged every day, and a walk on the beach or a dance under the stars were my only workouts.

Still, my results were in keeping with the averages. How could I ever allow steak to cross my lips again? But I knew I would. I may not be ready to give up meat, but I now know how to throw a plant-based tasting party. And why not play the host who’s on the cusp of hot culinary trends and, in this case, introducing guests to one that allows them to stretch their taste buds – and spare their cholesterol levels, too.

Of course, there’s no need to drag the party down with table talk of clogged arteries or the wonders of folate.

Better to set out some wine and tell guests you’re trying to extend your meatless repertoire to go beyond salads and sides.

To that end, you will be serving three diverse entrees: an Indian chana masala, a southwestern chili and the ever-popular comfort food, stroganoff. But for a bit of oil used in the first two, the recipes are made with low-fat non-processed plant-based ingredients, and yet all are full of flavour. So don’t worry. Once guests taste your newfound creations, they’ll thank you for letting them be your guinea … figs.

Scroll through for recipes!

In large saucepan, cover potatoes with salted water. Bring to a boil and cook until they are slightly undercooked. Drain; transfer to a bowl of ice water to stop the cooking. Drain again. In medium saucepan, heat 2 tbsp of the coconut oil over medium heat. Add the onions and 2 tbsp of the garlic. Sweat, stirring occasionally, until onions are translucent. Stir in chili powder and cumin; cook for 2 minutes. Add potatoes, tomatoes, corn, beans, cilantro, lime juice and most of the jalapeños, reserving some for garnish. Simmer, uncovered, over medium-low heat for 30 minutes. If chili is too thick, add vegetable stock to desired consistency. Season with salt and pepper to taste. Garnish with remaining jalapeño. From Angela Liddon’s The Oh She Glows Cookbook

Cook rice. Set aside until serving.

In large wok or saucepan, heat oil over medium heat. When a drop of water sizzles upon hitting pan, reduce heat to medium-low and add cumin. Stir and toast seeds for a minute or two, watching carefully to avoid burning. Increase heat to medium and stir in onion, garlic, ginger and serrano; cook for a few minutes, then stir in garam masala, coriander, turmeric, salt and cayenne (if using), and cook for 2 minutes longer. Add tomatoes and their juices and break them apart with a wooden spoon (leave some chunks for texture). Increase heat to medium-high and add chickpeas. Bring to a simmer and cook for 10 minutes to allow flavours to develop. Serve over cooked basmati rice, if desired, and garnish with a squeeze of fresh lemon juice and chopped cilantro just before serving.

2 large serving dishes with lids (one for rice, the other pasta) with serving utensils

1 pen plus 3 scorecards (one for each dish) per guest (download PDF from everythingzoomer.com)

Serve entrees one at a time, keeping remaining ones on low on the stove.

Serve in any order, asking guests to help themselves after you set out each dish.

Instruct guests to cleanse their palates between tastings with water.

Give guests time to jot down notes on scorecards, compare impressions and declare their favourite!