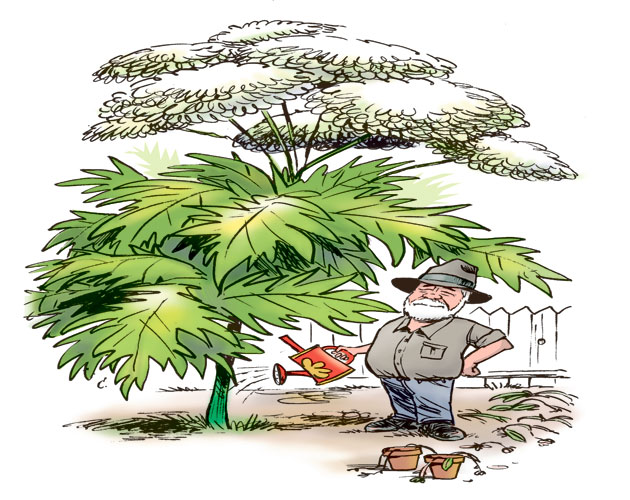 I am not the world’s greatest gardener. I try. Every spring, I purchase precious packets of organic seeds at prices that would make a Yonge Street smack dealer blanch. I consecrate my plot with lashings of fertilizers, soil conditioners, weed deterrents and germination enhancers. I subdivide it into serried rows behind cute wee signs that read Lettuce, Carrots, Tomatoes and Beans.

Then I sow, hoe, mulch and pray religiously according to the dictates of the holy Farmers’ Almanac — and I wait. And if I listen very carefully I can hear (just over the munchings of potato beetles, cabbage maggots, corn borers, cutworms, earwigs and banana slugs), the Gardening Gods snickering up their celestial sleeves. My annual crop is a cruel and twisted parody of agriculture. What were promised to become beefsteak tomatoes emerge grudgingly as tiny marbles, hard as jade and just as tasty. My Yukon Gold potatoes look like malignant tumours. My lettuce is listless, my peppers pathetic, my beets are beat and my carrots are DOA.

Each year, I discover new ways to fail at gardening and I’m not getting any younger. I confess I was ready to turn in my Lee Valley polyurethane knee protectors and take up a less demanding pastime — sword swallowing or running with the bulls, perhaps.

But then I discovered Heracleum mantegazzianum. Actually, it discovered me. It appeared in my garden as if by magic, a vegetative colossus every bit as magnificent as its monicker. The single plant towered over my puny vegetables — a good 15 feet high, with leaves like elephant ears, crowned with a majestic canopy of white flower clusters as broad as a beach umbrella. You’re familiar with Queen Anne’s Lace, that common weed of ditches and vacant fields?

Think Queen Anne’s Lace — on steroids. What a beauty. I intended to get a picture of my Sweetie standing under it, her arms encircling the three-inch diameter stalk, but I never got around to digging the camera out. Just as well — she’d probably still be swathed in bandages, if not walking with a white cane. Turns out that Heracleum mantegazzianum, better known as Giant Hogweed, is a monster worthy of Stephen King. Hairs on the stem and leaves contain a toxic sap that sears human flesh, produces painful, oozing blisters and ugly scars that can last for years. The sap also causes phytophotodermatitis, a condition that renders the victim allergic to the sun. And if it gets in your eyes, it can blind you.

How did it end up in my garden? A fatalist might suspect malicious divine intervention; more likely the agent was an incontinent starling.

The bad news: Giant Hogweed is showing up uninvited in gardens, riverbanks, bogs and vacant lots from Newfoundland to Vancouver Island. The good news is it’s relatively easy to spot — especially when full-grown. The tell-tale signs (aside from being as lofty as Steve Nash standing on Le Bron James’s shoulders): a stalk spotted with reddish-purple blotches and stiff hairs. Do not touch. At least, not with bare hands. Me? I put on Tyvek coveralls, a balaclava, safety goggles and rubberized gloves to take my Giant Hogweed down. Then I chopped it up, double-Hefty-bagged the remnants and tried to figure out what to do next. Bury it? Dumb idea. Burn it in the backyard? I don’t think so. A mature plant contains up to 50,000 hardy seeds that remain hot to trot for up to 10 years. Experts advise putting it into a landfill site, but that makes me nervous too.

It occurs to me that what I need here is magical not divine intervention. I’m sending my toxic bundle off to the pros who run the only School of Witchcraft and Wizardry I know.