The Isles of Greece: Izmir, the Birthplace of Homer 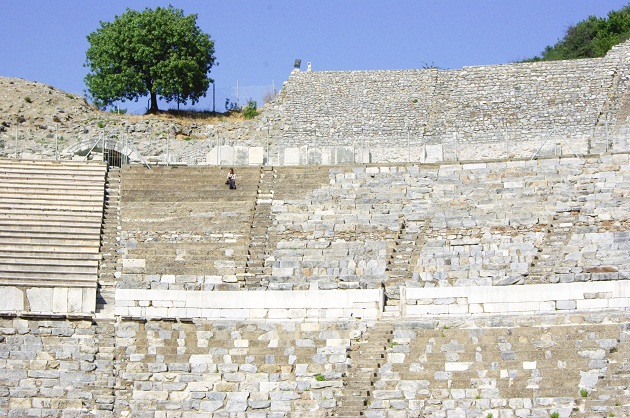 Today we arrive in the Turkish coastal city of Izmir where we will dock for two days and have the opportunity to participate in one or more of four tours: ancient Ephesus, Pergamon, Aphrodisias and a city tour of Izmir. Izmir, the birthplace of Homer, is Turkey’s third largest city, tucked into a natural harbor on the Aegean coast. Our bus trip in itself is interesting as we drive around the gulf through rolling hills and rich agricultural land producing peaches, oranges, pomegranates, olives of course, and cotton for those thick Turkish towels! Ancient Ephesus played a part in both ancient Greek and then Roman history.  Its Terrace Houses under restoration across from the Temple of Hadrian, the Library of Celsus and the Grand Theatre that seated 25,000 and where St. Paul preached are all nothing short of awesome. The tours are organized with particular care for an age group where walking on uneven ground can be challenging. But what amazing Zoomers we are! A woman from the U.S. has brought her 90-year-old mother, who sprints along the Upper Agora with determination and vigor.