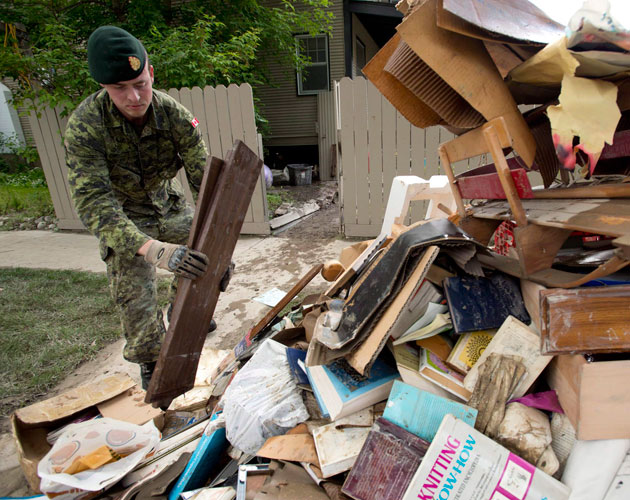 Images of the Calgary flood have shocked the world. Calgary resident Karen Ashbee gives us her perspective on the surreal aftermath.

When I moved to Calgary more than 12 years ago, locals insisted that we never got any rain. Seemed true to me that summer as I surveyed the countless acres of brown scrub that masqueraded as front lawns. But in June of 2005 with a record rainfall and an unprecedented flooding that turned small creeks into raging rivers that ravaged some of my friends’ homes, I felt differently. Now every spring I panic with the first drop of rain. Just this past weekend, a massive flood has devastated southern Alberta including Calgary. I am stunned by the magnitude of the flood and the damage. More than two dozen neighbourhoods have been evacuated, and downtown is desolate. Many of the bridges and roads are impassable, and those that are passable are choked with traffic. I know, as I have tried to navigate some of the inner city and been turned back. Luckily on Saturday, I was able to circumvent Elbow Park via Macleod to check on a friend’s home in Park Hill. On vacation in Venice, they had seen the photos and were texting me in a panic, concerned for their property. Although they were in the clear, I could see that the river had overtaken the neighbourhood below, one where two of my friends lived. I fear for what they will go back to as the water was up way past their front doors. Leaving Park Hill, I noticed a car floating in what was once Stanley Park, and a duck was swimming through the playing field.

I thank my lucky stars as I am one of the very lucky ones. Although my neighbourhood is close to the devastation of downtown, a mere eight-minute drive, to the main thoroughfare Stephen Avenue, we are high and dry. Located on a hill and nowhere close to either of the rivers, the Elbow or the Bow, our house has sustained neither damage nor power outages. As one of my Toronto buddies emailed me, “You must have a giant horseshoe somewhere.” I couldn’t agree more. Considered a transitional neighbourhood, one that is constantly under development, this past weekend has seen a record number of cars and people taking advantage of local businesses, pubs, gas stations and the Safeway grocery store. On Thursday, when it was evident that a state of emergency had been declared, I ventured out in the pouring rain to ensure we had food and water. Again, I consider myself to have won the lottery as I only waited 10 minutes at the local PetroCan to fill my tank and was able to purchase two dozen bottles of water, but upon entering the Safeway parking lot, I quickly realized I was about to do battle. No spots to be had, people parked illegally and not a cart in sight. When I did manage to score both a spot and a cart, the lineups in the store were surreal, and people had as many as two or three carts filled to the brim. Responding to rumours of water shortages and store closures, shelves were stripped of water, bread and milk. Frankly, if the power was turned off, unless these people were feeding a house full of evacuees, I wondered what contingency plans they had for their perishables. When the cops showed up, I abandoned my cart and left. Too much of a Stephen King novel for me, and besides I was off to the pub that afternoon with my neighbourhood gal pal and two of her friends who had been evacuated and needed some consoling. Not much else to do and besides Mayor Nenshi had begged us to stay put. The local may have been “party central” that day, but reality is now quickly setting in. Many residents may have been allowed to return to their homes, but their work has just begun. Standing on the top of one of the hills in the tony neighbourhood of Mount Royal on Saturday night, looking down at the Glencoe Club in Mount Royal, giant bins littered the street. Homeowners were hard at work shovelling out their basements and tossing countless treasured possessions. At the end of the day, I know this city will work together and rebuild. I have seen it before. And although the worst may be over in terms of flooding, I don’t think it’s time to breathe a sigh of relief yet. There is still a huge mess out there.

Karen Ashbee is a contributor to Zoomer and works as a City Editor at Western Living in Calgary. This is her account of the Calgary flood.