THE FALL, AND RISE, OF BRET “HITMAN” HART: PART TWO 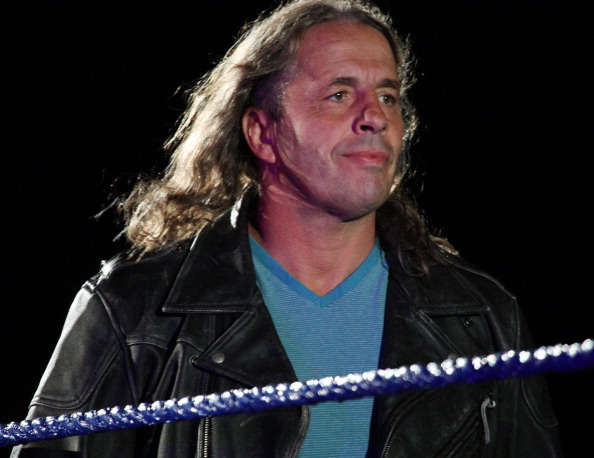 For Part One of this interview, in which Hart takes me through the biking accident that led to his stroke 11 years ago, reveals the challenges he faced on the long road to recovery, talks his safety record as a wrestler, and tells me why he believes he’ll live to be 100, click here.

In the late 1970s, around the time a young Bret Hart (not yet the “Hitman”) was honing his in-ring craft by treking across northern Canada for his father Stu Hart’s now legendary Stampede Wrestling company, an ambitious 30-something named Vince McMahon Jr. studied the ins and outs of pro wrestling promotion by working alongside his dad, Vince Sr., running the World Wide Wrestling Federation.

Around a decade and a half later, McMahon’s company, shortened to the World Wrestling Federation (WWF, now known as World Wrestling Entertainment), stood as the most recognized wrestling company on the planet. In March, 1994, at WrestleMania 10, Hart won the WWF championship, McMahon’s crown jewel, and was paraded around the ring on the shoulders of legends for a post-match celebration in the most hallowed of all sports arenas: New York’s Madison Square Garden. The title was the second of Hart’s five WWF championships, and it cemented him as McMahon’s most bankable star.

Three and a half years later, on November 9, 1997, Hart stood in the same WWF ring, this time in Montreal, the unwitting victim of what’s famously become known in wrestling lore as “the Montreal screw job.”

RELATED POST: The Fall, and Rise, of Bret “Hitman” Hart: Part One

The short version of the story is that McMahon, match referee (and Hart’s friend) Earl Hebner, and Hart’s opponent, Shawn Michaels, along with a few of McMahon’s closest advisers, conspired to beat Hart and take his WWF title in a match that Hart legitimately believed was supposed to end a different way. News that Hart was (begrudgingly) leaving the WWF for rival World Championship Wrestling had leaked, and McMahon wanted his title off of Hart’s waist as soon as possible. Hart agreed to lose it, but just not in Canada – where his current feud with Michaels had him cast as the ultimate Canadian hero.

Hart got swerved that evening, the referee ringing the bell and awarding the match and title to Michaels as the “Hitman” attempted to make sense of what had happened. The betrayal of both Michaels and McMahon left Hart deeply wounded for many years, until the period following his stroke when the opposing sides opened a dialogue, and Hart reflected on the toll the anger he’d harboured for so many years had taken on him.

In Part Two of my interview with Bret Hart, the “Hitman” discusses addressing his emotional health by mending fences with Michaels and McMahon, his triumphant return to the ring in 2010, his place in wrestling history, becoming a grandfather, and whether or not we’ll ever see another Bret Hart match.

MIKE CRISOLAGO: In recent years you mended a lot of fences with both Vince McMahon and Shawn Michaels. How important was it to your overall recovery to relieve yourself of such weighty emotional burdens?

I think after I wrote my (autobiography) I realized this is my final statement on my wrestling career and it sounds so angry still. It sounds so bitter toward Vince and the company. I‘ve always said if it wasn’t for Vince, and I’m sure my brother Owen [also a pro wrestler] would say the same thing, if it wasn’t for all the good things he did for us no one would even be talking about me today. God knows what I would have ended up doing but the opportunity and the job Vince gave me kind of saved my life in a lot of ways. There’s a part of you that has to be grateful for that.

MC: You even got one last WrestleMania match in 2010, against Vince McMahon no less.

BH: I just remember thinking it’d be fun to go back and do something with Vince and we’ll give wrestling fans one last chapter that nobody ever thought they’d get. It wasn’t a very great chapter – I mean the wrestling, technical-wise – but I always say it’s as important a match and important a storyline as I ever had in wrestling. I’ll always be grateful that Vince gave me a chance – not so much the win or the glory or anything – to go back and try to do something again. I thought all of it has led to my ultimate recovery, which is finding happiness that you really can live with again.

MC: The chapter didn’t necessarily end there — a few months ago the WWE hosted a “Bret Hart Appreciation Night” in Calgary, which touched on your legacy in wrestling.

BH: I thought that some of the things Vince said to me in the ring [that evening] kind of echoed a lot of the sentiment of how he really felt. He referred to the Bret Hart era and how I changed wrestling. And I think I did change wrestling. You don’t watch pro wrestling today, or WWE today, because of what Hulk Hogan did. And Hulk Hogan did kick the door open on wrestling. But the wrestlers today are the guys who watched me and my brother Owen and Shawn Michaels and Steve Austin. They were the guys who came after Hogan.

Hogan – he was a cartoon, and wrestling was more of a cartoon show, and we were all cartoon characters, and it was fun but I don’t think wrestling could have kept going at that pace. You’ve got to give (the fans) a good wrestling match – it’s not about posing. It doesn’t really matter how big my arms are, or how tall I am, or if I’ve got every muscle coming out of my ears. So I think I made wrestling about wrestling.

MC: For the millions of fans who know Bret “the Hitman” Hart, it might be difficult to imagine Bret “the Grandpa” Hart. Tell me about life with your granddaughter.

BH: I could use a few more [grandkids]. I’ve always loved kids anyway. She’s three now and they start developing more and more personality. I think she’s kind of really crazy about me and at the same time she gets so shy that it comes off the other way. But now she’s coming around more, where she’s really playful, and getting more and more cute all of the time. It’s a great feeling and she’s a really smart little girl too. [Laughs] She knows more about my iPhone than I do. It’s amazing how they just gravitate to it and understand it so easily. It’s going to be a sad state of affairs when I’ve got to go to her and ask her how to get something to work on my phone. But that day is coming sooner than anyone realizes.

MC: In the first half of the interview you mentioned you’d like to live to be 100. If you do, will we see another Bret Hart wrestling match?

BH: You never know. If I could do it safely. Unfortunately if I fall backwards, even slipping on ice or something, if I whack my head one more time I think that could be the last time I whack it. So I have to be pretty careful with my head. I think probably my days of wrestling are pretty much over but I don’t mind being an old legend in wrestling. I think they give me enough credit on [WWE programming] as it is. That means a lot to me. I always want to be remembered.

MC: The incredible thing, especially in our world of 15 minutes of celebrity fame, is that more than a decade after you last wrestled full-time you’re still so incredibly popular among fans. What is it about Bret Hart that continues to resonate with people?

BH: In my era, or when you were a kid, you remember that I was always a fighter. I was always a guy that never quit. And all those little things that I carried as a wrestler, those little things I portrayed as a character, in a lot of ways they were my real character. I was a good wrestler too. That’s really what it is. When people say, “You’re the best,” I was the best. I look at any wrestler out there today and I go “He wasn’t better than me.”

I was always trying to be a good role model or a good hero in wrestling. I always put the fans first and remember who put me where I am. If you do good things it comes back later for you. Maybe that’s why I’m remembered the way I am. And I’ll take it. I’m grateful for all of it. And the next chapters of my life, whether it’s the stroke or where I go from here, being a grandfather, I’ll still be a good role model. I’m going to always try to lead the way by example – but a good example. You know, if I was a good hero to somebody 20 years ago I can be a good hero to them tomorrow, [or] 20 years from now.