The Great Escape: A Canadian Story 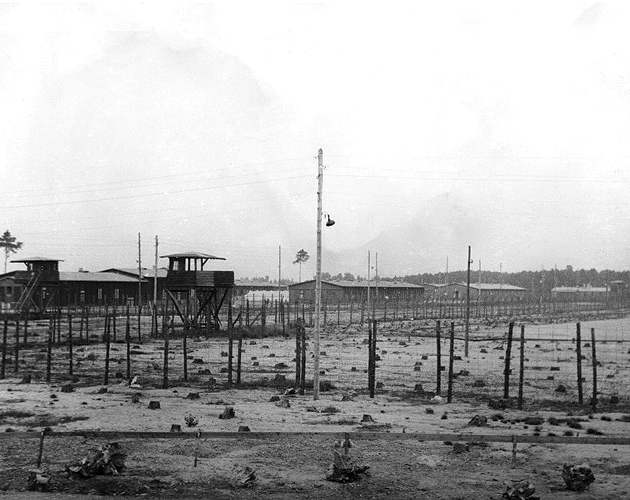 Half a century ago, Hollywood took the most enduring escape story of the Second World War and created a blockbuster movie. To this day, The Great Escape remains among the top 10 war films viewed in video or online. But is this epic flick of British and American airmen tunnelling out of a German POW camp even close to the truth? Author Ted Barris’s latest book, The Great Escape: A Canadian Story, sets the record straight about who was principally responsible for springing 80 POWs from that famous prison. In this Zoomer exclusive, he describes the pivotal roles ingenious young Canadians played … some paying with their lives.

More than a few times, wartime ground crews watched the Canadian RAF pilot challenge his bomber crewmates. Not to darts at the local pub in Topcliffe, England, where they were stationed during the Second World War. Nor to poker in the officers’ mess. No. Even in November 1940, just a few days before Flight Lt. Tony Pengelly, 20, was shot down over German-occupied Europe where he would eventually join The Great Escape, the RAF bomber pilot raced his comrades on motorcycles across the aerodrome tarmac to sharpen their reflexes. Pengelly loved speed. He thrived on competition. He instilled that in his bomber crew even if only during motorcycle sprints across the airstrip at Topcliffe.

But that – contrary to Hollywood mythology – is about as close to motorcycles as the story of The Great Escape ever got. Of course, the 1963 blockbuster movie, The Great Escape, paints a dazzlingly different story. For a generation, actor Steve McQueen, depicting shot-down U.S. Army Air Force pilot Capt. Virgil Hilts, would have moviegoers believe that at least one American escaped through a tunnel from Stalag Luft III, stole a motorcycle, disguised himself as a German dispatch rider and attempted to leap barbed wire fences into neutral Switzerland as part of the iconic Great Escape scenario.

In fact, there was no motorcycle chase. There was no Capt. Hilts. Stalag Luft III wasn’t anywhere near Switzerland. And Yankee know-how was not a determining factor in engineering The Great Escape. Actually, Tony Pengelly from Weston, Ont., and scores of other Canadians in the North Compound (Americans were in the South Compound) at Stalag Luft III were smack in the middle of this unparalleled escape plan to spring hundreds of Commonwealth airmen into the middle of an over-confident Third Reich and to draw unprecedented manpower away from the German war machine at the height of the war.

“No other escape,” historian Jonathan Vance wrote, “had such an impact,” infuriating Hitler, drawing thousands of  German troops away from the frontlines and triggering a secret Gestapo plot for the systematic murder of recaptured POWs, including 50 of the Great Escapers.

It’s also not true that The Great Escape plan was hatched suddenly in 1942 when the Commonwealth air officers landed at Stalag Luft III, about 300 acres of wooden barracks and sand concealed in the middle of a Polish pine forest and protected by 10-foot-high double fencing, machine-gun armed sentry towers, hundführer (dog handlers), the Abwehr (surveillance guards) and even underground microphones to detect tunnellers digging their way to freedom. Tony Pengelly began plotting his escape the moment he was shot down and sent to Stalag Luft I at Barth on the north coast of Germany. In his first year, F/L Pengelly took part in 48 escape attempts.
“[But] at Barth, escaping was strictly private enterprise,” Pengelly said. “A man can’t forge his own identity papers, dig his own tunnel, make his own wire clippers, escape clothes, maps [and] compasses. … From our futility, we knew we would have to organize to be successful.”

In April 1943, their German Luftwaffe guards moved all the Brits, Aussies, Kiwis and Canadians to the North Compound – “putting all the rotten eggs in one basket,” the movie Kommandant says. In doing so, they knowingly or unknowingly assembled the most educated and wire-savvy air force POWs in captivity, including nearly 600 Canadians. Among them, Wally Floody, a former Ontario hard-rock miner, would design tunnels “Tom,” “Dick” and eventually the 400-foot-long “Harry” for the breakout in the spring of 1944. Torontonian John Weir, who had trained himself to survive in the Canadian wilderness, defied the claustrophobia, lack of oxygen, darkness and dampness to excavate tunnels 30 feet underground. Fellow Torontonian George McGill, a champion track athlete and boxer, created sports spectacles to divert German guards’ attention from escape attempts and devised airtight camp security to protect tunnel construction. Meanwhile, Kingsley Brown, with family roots in Nova Scotia, had worked as a journalist and was fluent in German; he lived in the compound library assembling intelligence for forged documents the escapers would use to travel out of Germany.

But how would the escape committee ever get hold of original visas, worker passes and identification papers? Enter the scrounger. Not James Garner, the American in the RAF, as the Hollywood movie suggests, but 26-year-old bomber pilot, Barry Davidson from Alberta. As a teenager, he’d talked his way into flying lessons at the Calgary Municipal Airport. With his pilot’s licence, he wrote to Chiang Kai-shek, who needed pilots for his Chinese Nationalist air force, to hire Davidson; the great general gratefully declined. Davidson was shot down and captured near Paris in 1940; because he “got claustrophobic digging in the tunnels” at Stalg Luft III, he turned to the procurement of documents from unsuspecting German prison guards. Pengelly described their fine art of fleecing. First, either Pengelly or Davidson would “borrow” the best contents from Red Cross parcels regularly sent to the POWs. He’d strike up a conversation, share a few snapshots of family with a friendly guard. Then when the Canadian knew his prey was about to take a leave, he would offer the bait-covered hook.
“How would you like to take some coffee home?” he’d ask the guard.

The German would jump at the chance. The Canadians knew the average German hadn’t tasted real coffee since 1936. “And some chocolate for your boy?”

The gift might draw the offer of a favour from the guard, such as, “Can I bring you anything from outside?”

“Yes, if you wouldn’t mind,” Pengelly or Davidson would say. “I’d like a hundred toothpicks.” Something inconsequential would be sufficient the first time, but it was oil for the machine. The process would be repeated until, having broken the rules a few times, the guard could be blackmailed into providing a camera, film or the short-term loan of ID papers or travel pass.

“It was the psychology of binding a man with a thread,” Pengelly said, “and gradually strengthening the thread until it was far easier to submit to our bondage than to rebel.” He could then take the product of the “tamed” guard to his forgery team (nearly 150 artists, cartoonists, calligraphers, draftsmen, mapmakers and printers) to build an inventory of faked documents, so that an escaper could pass unnoticed through a train station, a checkpoint or maybe even an international border. That was, of course, if the escaper didn’t have to say anything.

If he did, several of the Canadian air force POWs supplied escapers with enough conversational German, French, Dutch and Danish to make him sound convincing. At Christmas of 1942, the air war had delivered downed RCAF navigator Gordon Kidder of St. Catharines, Ont., to the escape committee. Kidder had studied French and German at the University of Toronto in the 1930s. But the war drew him into the air force and eventually, when shot down, to Stalag Luft III. Of course, Kidder’s German guards were delighted to see and hear him leading groups of Commonwealth flyers through “Sprechen Sie Deutsch?” sessions. But behind their backs, Kidder taught soon-to-be Great Escapers how to ask for train schedules or how to answer questions about Kennkarte (ID cards) or Rückkehrscheine (travel passes) and when asked “Woher kommen Sie?” to state one’s birthplace in German.

In addition to glossing over the presence of Canadians at Stalag Luft III, John Sturges’s movie The Great Escape also suggests that the Kriegsgefangenen, or “kriegies” as the POWs called themselves, were entirely cut off from the outside world. Physically, they were hundreds of kilometres from Allied lines. But thanks to another Canadian inside the camp, they had regular access to that outside world another way. All those months at Stalag Luft III, Dick Bartlett, a 24-year-old Royal Navy pilot from Victoria, had  carefully concealed a wireless radio.

“Through friendly relations with Polish labourers at the camp,” Bartlett related, “[we] bribed one of the Poles to sneak the components for a small radio receiver into the camp.” The resulting wireless set allowed its radio crew of three holed up in a POW latrine to tune in BBC broadcasts each day. And, as often happened during Bartlett’s custody of “the canary” (the radio), when guards moved the kriegies from one compound to another, Bartlett hid the radio components in a medicine ball, the ubiquitous calisthenics sports ball used in every POW exercise ground. “That way, the radio-equipped medicine ball travelled from camp to camp and became an essential, continuous source of war news and intelligence.”

As Tony Pengelly had learned early in his imprisonment, successful escape was an enterprise achieved only by collective effort and attempted only when conditions were as close to perfect as possible. The escape committee reached those conditions the night of March 24-25, 1944, when 80 Commonwealth air force officers wriggled through nearly 400 feet of Tunnel “Harry” in just under eight hours, emerging and scattering unnoticed across the Polish countryside. Among them, Kidder, McGill and eight other Canadians escaped temporarily. Pengelly stayed behind to ensure that each escaper had the correct forged documents. Bartlett had passed his position on the escape list to a Norwegian more fluent in more languages than he. Meanwhile, Weir had been transferred from Stalag Luft III for medical treatment of burns, while Floody and Brown were purged to another camp just days before the escape. It saved their lives.

In the movie The Great Escape, at the climax of the motorcycle chase, a platoon of Germans overtakes Steve McQueen’s character in barbed wire near the Swiss border and harmlessly throws him in “the cooler” back at the POW camp. In truth, as many as 70,000 German troops and civilians were required to recapture all but three of the Great Escapers. Of the 77 Commonwealth air force officers who were tracked down, Hitler had 50 executed, including Kidder and McGill and four other Canadian escapers.

Those Canadian air officers, like others involved in The Real Great Escape, faced a deadlier fate than Hollywood scriptwriters, stuntmen or special effects editors were prepared to depict. Fortunately for history, however, Pengelly, Davidson, Bartlett and many other kriegies made it home to tell it the way it was.