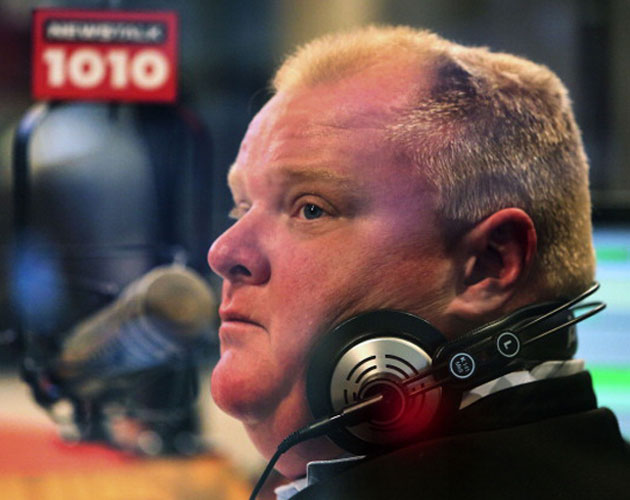 Here we are again, addressing the latest behaviour of Toronto’s mayor. Rob Ford took to the airwaves on Sunday, Nov. 3, (under his name this time) with brother Doug Ford on their weekly talk show on Newstalk 1010 to apologize. Of course, after the mention of an apology, listeners anticipated an admission of drug use or an announcement that he would be stepping down. Well, we should have all known better. Instead, Ford apologized for his “mistakes” and when asked to clarify what he meant, he identified those mistakes as “getting hammered down at the Danforth” (yes, he used the word “hammered”) and partying too hard on St. Patrick’s Day last year. Forget about the socializing with known drug dealers or allegedly smoking crack cocaine. Ford admitted that he’s not perfect and has to cut back on drinking, especially in public. Doug helpfully chimed in to suggest that he drink in his basement instead of in public. Yes, helpful advice. After about two hours of talking about what he’s done for the city, local events and more apologizing, the mayor took questions from listeners. The highlight was from an 81-year-old listener asking Ford to take a medical leave and blaming Doug for being an enabler, to which Ford made crystal clear that he would not be leaving office and his brother is not an enabler (what was that comment about drinking in the basement again?). When asked which drugs he ingested via a glass pipe, Ford replied, “I can’t comment on a video I have not seen. I have asked Chief Blair to release this video immediately. I want to see it now.” This time he took out the phrase “or does not exist,” but since the video is before the courts in the investigation for charges of extortion against his friend and chauffeur Alexander Lisi, it might as well not exist. Well played.

This morning Ford was once again on the radio, this time with AM640’s John Oakley and while he continued to use the same rhetoric regarding his drinking and reputation, he also had a few words regarding his brother’s political future when asked if he was damaging Doug’s brand. He said, “Doug will be provincial, he will be premier one day,” and “It has nothing to do with me. And no matter again how the media wants to spin it, Doug is the hardest working, smartest guy. He builds a multi-million dollar company by himself down in Chicago, creating jobs. And it’s not daddy. He did it on his own. He got elected on his own.”