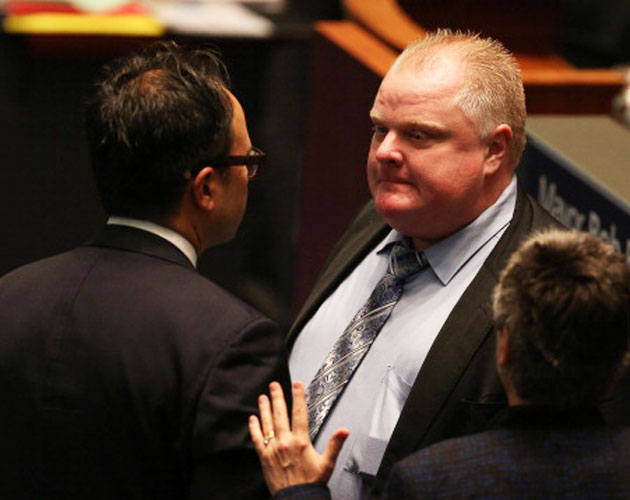 On his way into City Hall today, Rob Ford told reporters that he was expecting “a rumble in the jungle.” And that’s exactly what he got. Or, was it more like a fight on the playground at recess?

Of course the situation is much more serious than that. Councillor Denzil Minnan-Wong, trying his very hardest to repair the image of Toronto, presented a petition signed by 37 of 44 councilors calling for the mayor to step down. But not all councillors agreed with his efforts. Councillor Giorgio Mammoliti told reports, “I think the mayor does have some issues. I think he’s an addict of substance abuse. I think he’s also an addict of food. I think that’s important.” But, he added, councillors can’t “tell him what to do.”

The chamber was filled to capacity with 400 spectators cheering for blood. But Ford wouldn’t let the raucous crowd discourage him. When told a recent poll suggested most of Torontonians want him to resign, he said, “There’s only one poll that matters.” Adding: “That’s October 27.” The date of the next election. Even with Santa Clause parade organizers urging Ford to not participate in the event this year, Ford was in good spirits.

During council, Mayor Ford had a few choice words for Minnan-Wong and his petition. Minnan-Wong described his approach as “threatening” and asked for an apology from the mayor. Councillor Frances Nunziata was forced to play teacher asking Ford to apologize and requested that everyone respect and be civil to one another.

To which Ford responded, “I have nothing to apologize for.” Globe and Mail columnist Marcus Gee described it this way: “Mayor Ford’s voice rises to a shrill whine as he refuses to apologize.”

Mayor Ford’s voice rises to a shrill whine as he refuses to apologize.

Meanwhile in the peanut – I mean public – gallery spectators were yelling, “Shame!” “Shame!” at Ford. Eventually, he did apologize (though he didn’t use the word “sincerely” once this time). Surely this is the most un-Canadian moment in the history of our politics.

The drama kicked into high gear around 11:30 when Minnan-Wong asked Ford if he’d purchased illegal drugs in the last two years. Ford’s answer? “Yes, I have.” After what has unfolded in the past couple of weeks, we can’t say we’re incredibly surprised. The most shocking element was Ford’s immediate and honest answer.

Ford continued to be questioned about his time spent at the notorious “crack” house. The mayor’s answers were typical – apologizing for his behavior and saying he “can’t change the past.”

But the highlight had to be when Doug Ford jokingly asked Minnan-Wong, “Want to smoke a joint now, Denzil?” After participating in this spectacle, he might need it.