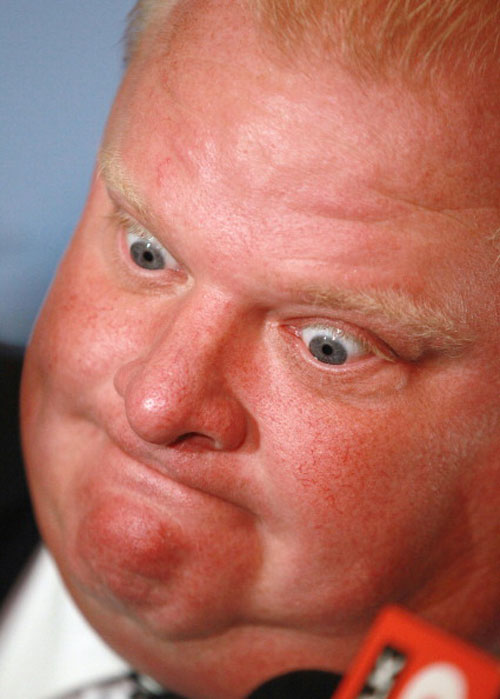 The media’s having a field day, though in the last year some of the players have changed – The Globe and Mail, having lured reporter Robyn Doolittle, who helped break the original crack scandal, is the paper breaking the crack video news. The Toronto Sun, meanwhile, has their hands on the audio while the Toronto Star is relegated to pushing a piece about a drunken Ford battling it out with Justin Bieber back in March.

While nearly everyone, friend and foe alike, wants the mayor to get the help that may very well save his life, Toronto is left wondering, yet again, how the Ford fiasco has possibly gone this far.

The fact is, the long-embattled mayor is a product of Toronto municipal politics at their worst, a lumbering Franken-Ford forged from the limbs of a decaying political environment and brought to life by the lightning strike that was the 2010 election.

Franken-Ford isn’t a man but the result of an apathetic municipal political landscape where, in recent years, the top voter turnout proved just over 50 per cent of those eligible, allowing a group of likeminded, suburban supporters to fuel a hollow “gravy train” to victory. And that train is sustained by a culture of chaos at city hall, where many of Ford’s opponents have sunk to his “whoever shouts the loudest wins” level in battles over everything from bike lanes to subways to budget cuts, which even earned councilors a public scolding last December.

Franken-Ford is creating havoc within a system that, despite the overwhelming evidence (drugs and alcohol abuse, homophobia, misogyny, racism) allows for removal of a mayor only via provincial intervention. Sure he lost most of his power, but the shadow of the monster (as seen with the new video) still looms over the city.

To top it off there’s the “TMZ effect,” where a “regular Joe” politico caught doing something bad (see: drugs, drinking), but not too unforgivable (see: infidelity, ala Anthony Weiner or Eliot Spitzer) becomes enough of a celebrity to keep his approval rating afloat, land him on late night television, and launch both a radio and Internet talk show.

So yes, while the odds of an alcoholic/drug addict becoming mayor of Toronto on the back of a “Gravy Train” catchphrase and the promise to personally come check out the potholes in front of your house are slim, we’ve seen it happen.

This should be a lesson to all of us – the entire system needs a serious overhaul of policies and attitudes, from the politicos down to the voters. We’ve already got one rampaging monster on our hands. Let’s not allow our political system devolve into a horror franchise.