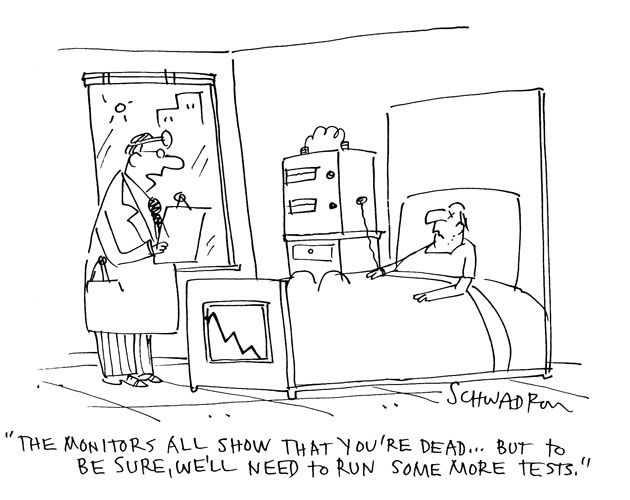 When you’re writing a column, it’s inevitable to have to return to topics you’ve covered before, either because they’re too complex to sum up in one go or they’ve become newsworthy again. Still, it’s rare to have to revisit something as quickly as I am here with the story of Margot Bentley. But a recent court decision in the case of this 82-year-old suffering from advanced Alzheimer’s disease galvanizes me to action.

The decision was brought down by the Supreme Court of British Columbia in a dispute between the Bentley family on one side and the Maplewood Nursing Home, together with the province of British Columbia, on the other. In my opinion, the decision is stunningly cruel to Margot Bentley and may represent a major intrusion into the lives of all aging Canadians.

A quick recap. In 1991, Margot, a senior nurse who had for many years specialized in dementia care, signed a Statement of Wishes, directing that should she ever be so similarly stricken with no hope of recovery, she be allowed to die without “heroic measures” or artificial means, including the “dispensing of nourishment or liquids.” By the late ’90s, she was displaying early symptoms of the very thing she dreaded, Alzheimer’s disease, and, by 2011, she was in the final seventh stage – mute, immobile, surviving only because of spoon-feeding, which involved the reflexive opening of her mouth when her lips were tapped with a spoon. Her daughter and proxy, Katherine Hammond, contacted the Maplewood Nursing Home, where her mother was a resident, and asked that its caregivers stop feeding Margot per her own instructions.

After stalling for several months, Maplewood not only refused to stop the feeding, they refused to let Hammond and her dad and siblings transfer their mother to a hospice or Hammond’s home. Their argument: spoon-feeding wasn’t “health” care but basic or “personal” care, and Margot was “consenting” to the care by opening her mouth. Further, they said, if caregivers were to stop feeding, they could be charged with neglect under the province’s Adult Guardianship Act. In reply, the family launched a lawsuit against Maplewood, its parent organization, Fraser Health, and the province to get the feeding stopped. The B.C. Supreme Court began hearing the case last August, with the Honourable Mr. Justice Bruce Greyell presiding. Justice Greyell’s verdict was rendered this Feb. 3: in virtually every instance, he sided with the nursing home. He ruled the caregivers were to continue to spoon-feed Margot and that the home was justified in holding her a resident there, despite her family’s strong wishes to the contrary.

To say I was astonished, floored, gobsmacked by the judgment would be an understatement. It had never occurred to me that a signed instruction, so detailed, and written by a person who so vividly knew exactly what indignity advanced dementia could inflict, could be rejected by the Court. But other people closer to the trial were less surprised, among them Wanda Morris, the executive director of Dying with Dignity, an organization of which Christopher Plummer and I are lead patrons. She observed that a number of new arguments had been raised at the trial that seemed to tilt the balance toward the nursing home and the province.

One of these was that Margot’s original Statement of Wishes was legally vague and consequently invalid. Another was the reference to a second letter of instructions that Margot’s husband discovered in 2011, which apparently post-dated the first and which once again directed that she wanted no heroic or artificial measures, (including tube feeding) but which did not include the phrase “no nourishment and liquids.” In a twist worthy of a crime novel, Mr. Bentley swore that there was no signature at the bottom of this second document when he first saw it. Somehow, at a subsequent date, after Margot’s daughter gave the second Statement of Wishes to the director of the nursing home, a signature appeared on it which neither Mr. Bentley nor his daughter recognized as Margot’s. In his decision, Justice Greyell wrote: “[The plaintiffs] assert that the signature is a forgery but offer no explanation for who may have forged the signature or why.” Funny, I can.

Almost every one of the judge’s findings strike me as odd, if not perverse. He found that because Margot opens her mouth when it is tapped with a spoon, she is “capable of making the decision to accept oral nutrition and hydration and [is] providing her consent through [this] behaviour …” to which Dr. Jocelyn Downie, a professor at Dalhousie University Law School who specializes in the intersection of law, ethics and health care and who thinks the Bentley judgment is a travesty of justice, says she doesn’t believe someone with Stage 7 dementia can possibly be competent. She also notes that courts have already ruled that an incompetent patient with dementia cannot overrule a decision of their competent pre-dementia self. To my amazement, Justice Greyell found that Margot ’s first Statement of Wishes was vague – his reasoning: although Margot clearly stated that if a situation arose in which there was “no reasonable hope of recovery from extreme physical or mental disability,” she did not want to be administered any “nourishment or liquids” and also first forbade any “artificial or heroic measures.” Because spoon-feeding could not be defined as artificial or heroic, according to Justice Greyell, what Margot most likely meant by no nourishment or liquids, was no tube feeding.

But actually, little of all this matters because, at the end of his judgment, the judge says that even if everything the Bentleys argued were correct, he would still have ruled against them. In his own words: “Even if Mrs. Bentley was found incapable of making the decision to accept oral nutrition and hydration, I am not satisfied that the British Columbia legislature intended to allow reference to previously expressed wishes or substitute decision makers to be relied on to refuse basic personal care that is necessary to preserve life.” Translation? If Margot really meant she didn’t want to be spoon-fed if she was ravaged by dementia, she was actually, electively, asking for help in dying, and that was assisted suicide, which is illegal in B.C. and in the rest of Canada. All the rest of the arguments, it would appear, were but a smokescreen. Why spend so much time on them if they are irrelevant? Why take up every one of the plaintiff’s claims so systematically if a broader law rendered them moot in the first place? Was the justice trying to cover every base in the event of an appeal? Or was he just trying to convince himself? It’s hard to believe that Justice Greyell was not aware that Margot did not want to live a life where she signalled consent by opening and closing her mouth. Yet he refused to grant her the death she wanted. By way of explanation, I thought (I guess I hoped) he’d say that he was sorry but hamstrung by the law and felt for her plight. But he didn’t!

If this fate can befall Margot, is any of us safe? The awful irony, of course, is that it should have been Margot. Who knew the real face of dementia better than she? Who tried harder to avoid what she dreaded might come? Who has more standing in the struggle to rest in peace?

This decision is important to all those who have thought through their own demise and created Advance Directives. Certainly, I’ll be phoning my lawyer to go over my Living Will and, if you have one, perhaps you should, too. What we all thought was clear may no longer be clear enough. Kieran Bridge, the Bentley family’s lawyer, suggests that Justice Greyell has set a standard of clarity so high that the greatest jurists in the world would have trouble satisfying it. Still, we must try.

Clearly, the issue of feeding needs more definition. Can the Directive show that at signing the patient understood that he or she might at some point not be able to feed themselves without assistance? On the other hand, when does assistance become too much? Does opening of the mouth constitute “consent”?

Another issue, perhaps the scariest of them all, concerns the person whose mind is still fully alive but whose body is not. They may be trapped within, without movement, voice or even vision. That was Sue Rodriguez. That is my greatest fear.

And, from the caregiver’s side, the executor’s side, how does a person develop the knowledge, the strength and the confidence to carry out the Directive for their loved one when pressured on all sides by the medical system, the legal system and other members of the family?

While Dying with Dignity focuses its efforts on those who are grievously and irremediably ill and suffering unbearably, that Margot is neither terminal nor in any apparent physical discomfort brings into high relief the fact that our rapidly aging world will soon need to also confront the advisability of allowing mentally competent older individuals suffering from various chronic and excruciating non-terminal problems to receive professional assistance in dying if that is their persistent wish and demand.

As Bing Sherrill, a reader from Buffalo, N.Y., put in a letter to me: “This is not an easy or happy subject. But the more discussion ahead of the challenge, the better prepared we will be for the inevitable.”

This story originally ran in the May 2014 issue of Zoomer magazine.