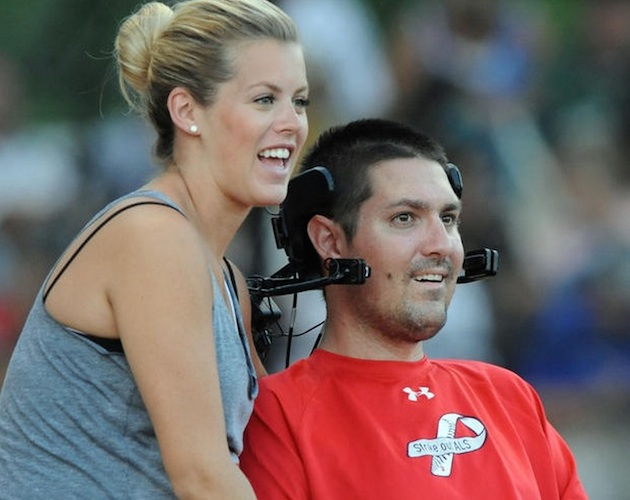 He had no idea of the viral stir he was about to cause. Meet the man who started it all…

You log onto Facebook. Someone’s tagged you in a video. You click to it to find that you’ve been challenged to dump a bucket of ice all over yourself. Odd, you think. The person has noted that you have 24 hours to complete the challenge or you must make a donation. Fair enough. You set up a camera and ask someone to dump the bucket of ice and water on your head. Now sopping wet and gasping for air, you nominate a few of your own friends and family members – and make a donation anyway. If only for a few moments, you felt the anxiety of living with limited motor neuron abilities. You felt a piece of 29-year-old Pete Frates.

It began with a few pro golfers who were goofing around and dumping buckets of water on one another in support of charities of their choice. Then in June, Frates, who had been recently diagnosed with Amyotrophic Lateral Sclerosis (ALS or Lou Gehrig’s Disease), challenged family members to do the same in support of his own fund – the Pete Frates #3 Fund – to help with his medical care and expenses.

He had no idea of the viral stir he was about to cause.

“It’s so compelling because if you go online and search [Frates’] name, you’ll see him doing the initial one,” Tammy Moore, interim CEO of ALS Canada, told Golden Girl Finance in a phone call. “He can move his body a little bit – over the course of time he does do it – but of course it’s quite challenging.”

The ALS Ice Bucket Challenge you’ve seen sweeping across your social media platforms – and perhaps even participated in yourself – wasn’t started by any organization. It had grassroots beginnings and grew organically. For Frates, it was a very personal effort that spurred from his own interaction with the disease. It’s one that has reached across nations, touching every celebrity from Justin Bieber to the guy from Star Trek(the ship captain himself, in fact!), and has even showed up at the front door of the White House.

ALS affects a person’s ability to move and speak. It’s the most common of five motor neuron disorders – but still one that can leave those affected feeling isolated, according to Moore. About 3,000 people in Canada live with the disease. About 1,000 more people will be diagnosed this year – and about 1,000 people will die from the disorder.

“Today we just crossed the $11 million mark,” she said. To put that into perspective, ALS Canada has an annual budget of $7 million.

“It’s substantial, and I think what’s more substantial is the number of people that have been touched by it. We have 175,000 donors – and that’s just over a three week period.”

“For people living with the disease, this has been an outpouring of support. It’s a rare disease, you can imagine,” she added. “People living with it now know that others know about it, care about it, and have demonstrated their support to show that they now know what they’re going through.”

Around the world in 80 days

Globally, the challenge has conjured $100 million in donations towards the support of people living with ALS. Accessibility devices, home modifications, and mobility vans are just a few of the expenses leaving those affected by the disease feeling not only emotionally, but financially burdened as well. A wheelchair alone can cost upwards of $35,000.

Funds go toward the client care, research, and government lobbying to further support those living with ALS. If you’d like to support locally, go to ALS.ca (or your country’s affiliate) to make a donation.

Or you can grab a bucket of ice and get ready to join the millions around the globe who can now say that they, too, have been literally touched by ALS – and a whole lot of ice.