I Was There: Beyond the Bombs of Boston 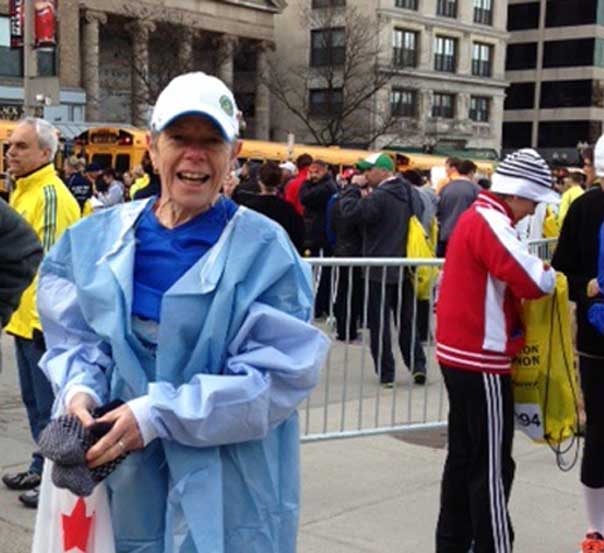 Two years ago this week, two bombs went off near the finish line of the famed Boston Marathon, killing three spectators and wounding more than 260 other people in attendance. Here, Zoomer blogger Jean Marmoreo on what it was like to be there.

How to deal with a bomb that explodes 10 minutes after you cross the finish line?

The guidelines from SAMSA – the National Substance Abuse and Mental Health Association – were forwarded within days by the Boston Athletic Association website to all runners and volunteers. They outline many of the possible reactions that may follow a catastrophic event such as the Boston Marathon bombings.

They’re very positive about recovery and highly specific about simple ways to protect yourself. For instance, they remind you that knowing your reaction to past experiences will affect how you’ll handle this one.

As last week unfolded, my own reactions became clear – and turned out to be very predictable.

After the race, my husband and I decided to head back to Toronto in the wake of the uncertainty and fluidity of the scene in Boston. We left our hotel in a cab just minutes before it was locked down, as were most hotels in downtown Boston.

The line at the security at Logan airport stretched half the length of the airport, so we immediately diverted and headed for the car rentals. Once on the Mass. Turnpike, we began to breathe a little easier and slowly, with the steady updates on the radio, the reality of the devastation began to sink in.

It was in the car that I penned my first reaction — to run again, a response that has since been echoed in running groups in towns and cities, by the president, by common folk, non-runners and families alike, adding their voice to the swelling ranks. It was a predictable reaction – defiance, determination, steely resolve.

We crossed the border into Canada early on Tuesday  morning,  and with the first three descending chords of CBC Radio One’s “Q”, always signifying a eulogy, my tears flowed.

As Christie Blatchford once remarked about me, “That woman sure can blubber.” Jian Ghomeshi’s essay about legs, those that ran and those 500,000 who stood to cheer; about sport that challenges all of to push ourselves, about spirit that was crystallized into our consciousness by Terry Fox in his Marathon of Hope; about our common ground that is vulnerability, determination and a Boston dream that is 117 years old  – all of this braced me as it embraced us all.

As Tuesday turned into Wednesday and Thursday, I looked for other wordsmiths to provide the same elegance of emotion and solidarity, the same call to action.

Barack Obama evoked scripture in his Interfaith Service on Thursday when he commented, “Run with endeavor the race that is before us” and “We will stand, walk and, yes, run again.”

He referenced Bill Iffrig, the 78-year-old who was knocked to the pavement by the blast and immortalized in the photo with the police woman’s gun drawn behind him. He picked himself up and crossed the finish line in 4:03:37. Why?  Because runners, a singularly determined bunch, will do anything to cross that finish line.

The CBC’s Rex Murphy expanded the scenario of our southern neighbour’s plight. He lamented the absence of those pillars of oratory, Lincoln and Churchill, whose bygone speeches quelled  an outrage that could threaten a nation’s soul and that still has the capacity to rattle an entire civil order.

I sought solace in such incisive commentary. I searched in those words for language beyond my capability to express. But mostly and predictably, I went to work.

It didn’t work so well on Tuesday. I was distracted, and my patients needed to talk about the event, no matter how far they were from it. They were also very sheepish about their comparatively minor symptoms, but that was in step with my own vague survivor guilt about failing to do more, to offer assistance once I knew, back in the hotel room, what had really happened.

Wednesday went more smoothly. I was able to shelf the reactions, the restless energy and distraction. I started my 24-hour obstetrical call shift at Sunnybrook Hospital in Toronto. In helping three moms deliver their babies and tending to two others, I thought of a young ER doctor we knew who went to work at Brigham & Women’s Hospital in downtown Boston half an hour before the bombs went off. She, of course, ended up tending the wounded and dying in a scene from Hell.

It turns out the Director of Disaster Response for the ER at Brigham & Women’s is a Canadian, Dr. Ron Wall. He told a Canadian Medical Association Journal reporter: “We had patients with very extensive lower extremity injuries – large pieces of their muscle and skin and bone missing from the blast.”

There were also “very bad fractures – the type of fracture you can only get with a tremendous amount of force.” As Walls oversaw the hospital’s disaster response plan in the ER, our young friend, Dr. Emily Aaronson from Toronto was working on teams treating three seriously injured patients. All had open fractures, the bones splintered or crushed, with large portions of muscle exposed. Bleeding copiously, the patients needed blood products and quick attention from orthopedic surgeons.

Emily emailed her family the next morning to thank them all for the expressions of support that had piled up while she was bent to her task of saving lives with singular focus. Brigham & Women’s treated 31 of the critically injured people that afternoon.

Emily had been a part of last year’s response in the Boston Marathon in the aftermath of a record heat wave when well over 1,500 runners were treated in the city’s ER departments. But that was mere fluff compared to what was now war zone triage in a combat ER.

By Thursday evening, I was happy to be at home cooking for my family, being in company. But by then the images of the two suspects, replayed on our TV screen, consumed our attention. The wonder of technology, the appreciation of incredible co-operation and merging of information across all the security forces and public facilities, the incredible outreach by Bostonians and runners to recall what they saw  prompted us to take bets on how long it would take to “get ’em.”

The same evening, we listened to Barack Obama salute Boston, the city he quoted as being “the perfect state of grace.”

But I say you don’t have to go to Boston to have a piece of her. You don’t have to stroll the Common, walk the brick pathway of the Freedom Trail. You don’t have to peek into Paul Revere’s church or climb Copp’s Hill to stand where Abigail Adams stood in 1775 to watch as Washington’s Revolutionary troops fought Britain’s Imperial Army.

You don’t have to have a bowl of chowder at Legal Seafood or a bowl of Irish Stew at Durgins to own a piece of Boston.  We are all tied to its legacy as the birthplace of that initial fragile experiment in democracy we know as America.

The marathon has been held on Patriot’s Day – a holiday that honours those founding fathers for 117 years now. So yes, even Canadians beyond the 2,000 runners who took part in this year’s race  will salute the piece of ‘perfect grace’ that is Boston.

Our friend Colin Brown has a daughter attending university there. He emailed how he plans to honour Boston when he goes to attend her graduation. “I’m going to stand on those two spots on Boylston and say a little prayer. Then I’m going to buy something from Lord & Taylor because it’s their camera that will end up hanging the bastard who did it. I’m going to go to my favourite pubs, argue with the locals about the Red Sox and the Bruins, and maybe shake a cop’s hand on my way back to the hotel.”

And then on Friday morning came his next email.

“My daughter chose last night to flee the confines of the Back Bay investigation zone to spend the night at a friend’s pad in Cambridge! Up all night, gunfire, car chases, explosions everywhere. Now in lockdown – again.”

By then, we all knew about the chase and, before the day was out, we would know about the boat in the backyard (only in Boston) and the owner who lifted the tarp and saw the bloodied body and called the police. We would know the cheering response of bystanders as the police left Watertown and the surge of Bostonians into the downtown as an entire city was released from lockdown.

As for me, on Friday, feeling the release, I did what seemed a wholly reasonable response. I shopped for a pair of cast-iron running support socks and a really pretty dress.

These were five of the most intensely emotional days in my life. Michael Enright ‘s conversation on CBC Radio with Dr. Paul Rogers provided the concluding brace to my week of understanding.

Dr. Rogers is the Professor of Peace Studies at the University of Bradford in England and an expert on urban terrorism. Applying his expertise to Boston, he elaborated on the effects that are inherent in such an act – small dirty bombs,  dense crowds,  an act to induce fear in a group larger than the group affected, lots of media coverage.

I concluded that if urban terrorism is a new reality,  in my bomb-naïve innocence, it seems how we respond to this fearsome prospect matters means a lot.

We have heard much this week about resilience, defiance and determination – not to be cowed, afraid or broken. But that requires more than mere reaction to atrocities. That requires a reset of character. It requires owning the pleasure of the open road, whether you walk or run or wheel. It demands the company of friends and the provision for the safe embrace of your family. It insists on treasuring what has been won by at least two generations of our soldiers in wars fought abroad and knowing that such battlefields may now become extremely personal, uncalculated, and unforeseen.

We cannot live a life that avoids this prospect; rather, we need to act to surmount it in order to live and yes, to run.

As our friend in Homeland Security said:  “Life is a beautiful thing. We should work to make the most of it, as tomorrow is not a promised thing.”

Dr. Jean Marmoreo placed first among women aged 70-74 moments before the fabled marathon was rocked by tragedy as multiple bombs exploded near the finish line. She is the first Canadian to win her age group four times in the history of the fabled Boston Marathon.

You can read her blog “This Is What 70 Looks Like” here.