Just who is Sherlock Holmes? 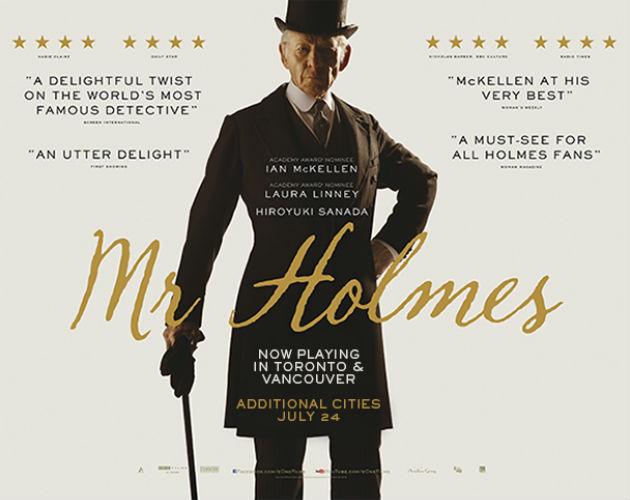 Composed, remote, focused, intuitive, logical, and strategic; a man of superior intellect who has conquered ordinary emotion to elevate himself to superhero status in order to solve life’s most perplexing mysteries. That’s Sherlock Holmes.  As it turns out, there’s more than meets the eye.

You’d think that after four novels and 55 short stories penned by Arthur Conan Doyle, as well as 254 film and television adaptations, we would know Baker Street’s most famous resident.

But not so! Mr. Holmes, starring Ian McKellen as Sherlock Holmes in his dotage, reveals a second nature, one hidden successfully for forty years. The fiction that grew around him, that is the “him” of Sir Arthur Conan Doyle’s imagination, has undergone a seismic shift.

As every Sherlockian knows, minor details are telling. Holmes never wore a deerstalker or smoked a calabash pipe. Total fabrication by his confidant and aide John Watson, whose detective stories, based on Holmes’ cases, needed a little sexing up. Now, you see, in reality Holmes likes to go hatless, while smoking a cigar.

Mr. Holmes portrays an ageing Sherlock as psychologically adrift, tortured by the painful secrets, guilt and regrets of his past.  These are unfamiliar elements in our famously cold-blooded pop culture genius – and the revelation turns everything upside down.

The man obsessed with logic hid his turbulent inner life from an adoring public, the few people he let draw near, and most particularly, from himself.  He recognised suffering in others but didn’t connect.  According to Mr. Holmes, it all unravelled when Watson left him to marry.

Sherlock learns that his actions many years before caused intense suffering for a man in Japan and feels deep pain because his thoughtlessness had consequences he didn’t foresee. Holmes is no longer untouchable – the wall is down.

Each iteration of Sherlock has pushed his boundaries in different directions. For instance, Jeremy Brett, one of the most popular Sherlocks – spanning four full TV series and five television movies ­– was arch, icy and supremely debonair. Benedict Cumberbatch’s version is modern; he’s digitally superior, may have Asperger’s and gives Holmes sex appeal.

Arguably the actor most famous for playing Sherlock Holmes on film, Sir Basil Rathbone set the cinematic benchmark for all that followed. Charming, noble, and compassionate, his silhouette as Holmes is almost as iconic as the character himself.

We have seen a medical Holmes (House), a tattooed, follicly challenged Sherlock with a female Watson (Elementary), a pint-sized version (Young Sherlock Holmes), a funny Sherlock (Without a Clue) and a wealth of actors who made him their own – Christopher Plummer, George C. Scott, Peter Cushing, Christopher Lee, silent film stars Eille Norwood and Bronco Billy Anderson, and the voice of Peter O’Toole. He’s even appeared with Tom & Jerry.  You don’t have to be a world-class detective to realize that Holmes is one of the most influential fictional characters of the modern era, and if history is our guide, we’re not done with him yet.

To see Sherlock as he’s never been portrayed before, catch Mr. Holmes in Toronto and Vancouver July 17, and additional cities July 24.