Federal Leaders’ Debate: Who Won? We Did 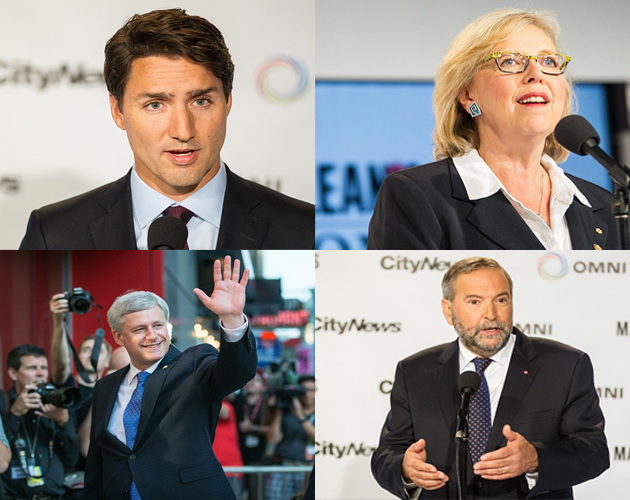 And the winner is … the Canadian middle.

Mostly, Canadian voters could hear what they wanted to hear during last night’s debate.

The leaders picked the statistics and facts that served them best and then spun them into whatever attack or defence was needed in the moment.

If there was a winner, in terms of style and engagement, it was Elizabeth May. She came across as unscripted, authoritative and, well, human.
The men seemed somewhat robot-like, but then, they did have more at stake — a lot more. May had nothing to lose.

Justin Trudeau was runner-up. He had the most to lose and by making his case without messing up, he came across as viable prime minister material. He proved that, in a debate at least, he’s ready.

Thomas Mulcair’s manner of speaking, despite his debate agility, is still somewhat off-putting even if tried to tone down the belligerence. There’s a hint of scold and smugness in how he pauses between words. Too often when he speaks in defence or attack, it’s as if he’s shaking his finger at the listener.

Prime Minister Harper held his own, hardly seeming to break a sweat when the attacks piled on.

One of the best of those came from Mulcair who seemed to catch Harper admitting to a second recession on his watch. It was the closest we came to an “aha!” moment in the debate.

And the closest we came to a memorable “zinger” was Trudeau’s response to Mulcair’s heckling question concerning an acceptable percentage result in a Quebec referendum.

Repeatedly, Mulcair insisted on a number from Trudeau.

Trudeau fired back, “Nine,” referring to the Supreme Court.

I’d assume that was off-the-cuff and all the more admirable if it was.

But Trudeau also came prepared, making a repeated dig about Mulcair saying one thing in French to a Quebec audience and then contradicting himself when speaking in English outside of Quebec.

Trudeau could have skipped the references to his love for his children — is there a politician who doesn’t love his children? — and the oblique reference to his father was somewhat opportunistic.

But all in all, the four leaders proved they are in fact leadership material. The result of the debate was confidence that any one of the four could lead the country.

Now it’s just a matter of policy. Do we want more day care or do we want less taxation? Do we want the C51 bill to combat terrorism or do we find it conflicts with the freedom Canadians cherish? Do want a carbon tax or do we believe that it’s just a tax grab that won’t even work to help the environment?

Those and other issues that were discussed last night are the choices we’ll make on Oct. 19. We’ll be voting for the party that best represents our views about how our country should be governed, rather than for the party leader who’s had the most or least zingers or gaffes or comebacks or the most likeable manner.

And that’s exactly how it should be.