Globe and Mail Leader’s Debate: Sound and Fury Signifying Nothing 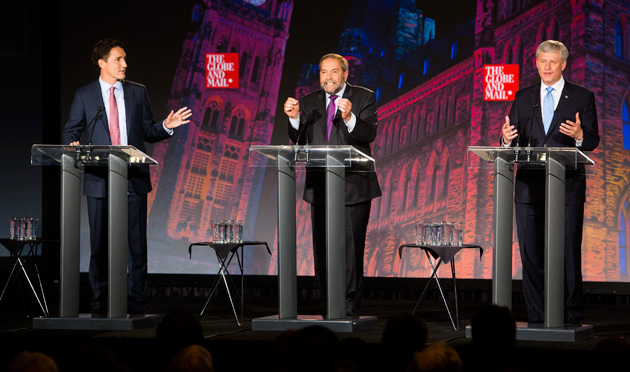 As soon as the three federal candidates had uttered their last “zingers” in Thursday night’s Globe and Mail Leaders’ Debate, there was the usual scramble among political pundits to declare who emerged as winner. The real question, however, should have been: why are we even holding these inane affairs?

The whole concept of a true “debate” was noticeably missing last night as Stephen Harper, Tom Mulcair and Justin Trudeau repeatedly cut into their opponents attempt to get their points across, childishly talking over and and one-upping each other whenever possible.

David Walmsley, the Globe’s editor-in-chief and moderator, didn’t help matters by repeatedly inserting himself into the fray, with his frequent editorial comments and asking the leaders to repeat themselves if he didn’t feel they answered the question to his liking.

In the end, the usual free-for-all ensued, with leaders shoving in their pre-scripted comments and then yelling, interrupting and smirking until it came time to shave their oars in again. The result was a highly unsatisfying waste of time best summed up by this Calgary Sun headline: “Debate’s Biggest Loser: The Voter”

For what it’s worth, here’s a recap of each leader’s best lines from last night (courtesy of the Ottawa Citizen):