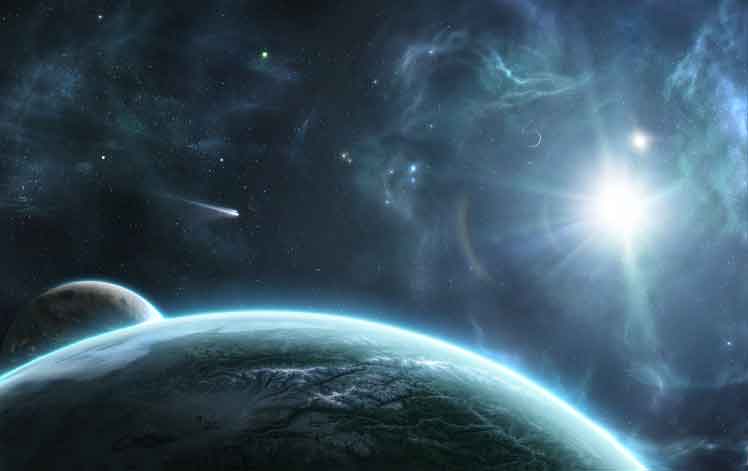 It’s appropriate that, to cap the roughly one-month period that saw the release of a new Star Wars film, the passing of David Bowie – a.k.a. Ziggy Stardust – and the stealthy spotting of a gorilla on Mars, scientists announced that they may have discovered a ninth planet at the outer edges of our solar system.

Dubbed “Planet Nine,” what the potential celestial body lacks in a creative name it more than makes up for in mass – sizing up at possibly ten times the size of Earth. Not to be confused with Plan Nine from Outer Space­ ­– don’t worry, there’s not a notoriously terrible 1959 Ed Wood film ten times the size of Earth floating around out there – Planet Nine from outer space hasn’t technically been spotted yet.

Rather, scientists Konstantin Batygin and Michael E. Brown of the American Astronomical Society believe the planet exists in the Kuiper Belt because of space debris and smaller planets that appear to be orbiting a larger body.

“We demonstrate that the perihelion positions and orbital planes of the objects are tightly confined and that such a clustering has only a probability of 0.007% to be due to chance, thus requiring a dynamical origin,” the pair wrote in a recent paper in The Astronomical Journal titled “Evidence For A Distant Giant Planet In The Solar System.

And that “dynamical origin” is believed by Batygin and Brown to be Planet Nine, dubbed a “massive perturber” in their paper, which seems like a rather rude designation for a planet we hardly know.

According to the Washington Post, “Telescopes on at least two continents are searching for the object, which on average is 20 times farther away than the eighth planet, Neptune … But at such extreme distances, it would reflect so little sunlight that it could evade even the most powerful telescopes.”

In the same story, Brown told the paper, “We’ve been looking for it for a while now, but the sky is pretty big. We know its path, but not where it is on that path.” Considering it would take Planet Nine roughly 10,000-20,000 years to orbit the sun, that’s one large path to try and pinpoint it on.

The work by Batygin and Brown follows up on similar theories about Planet Nine’s existence by scientist Scott Sheppard – whose work, ironically, Batygin and Brown originally set out to propose a counter-argument for.

Of course the idea behind Planet Nine is all still theory, and will remain so until concrete evidence of its existence is discovered. And this isn’t Brown’s first foray into issues related to planetary discoveries. In 2006, Brown helped lead the charge to strip Pluto of its planetary status. So are Brown’s motives for finding a new planet spurred by intergalactic guilt?

“My daughter, she’s still kind of mad about Pluto being demoted,” Brown told the Washington Post. “She suggested a few years ago that she’d forgive me if I found a new planet. So I guess I’ve been working on this for her.”