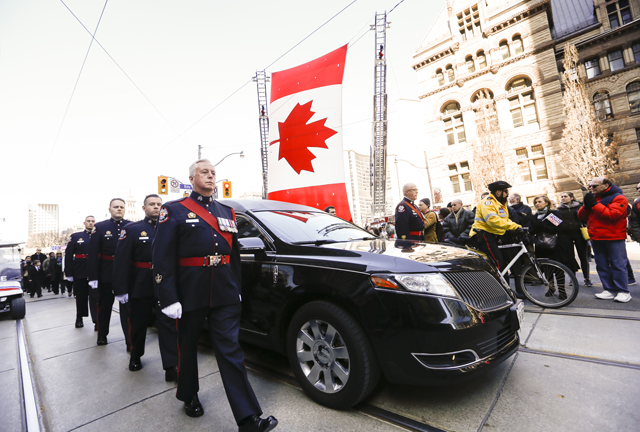 Former Toronto mayor Rob Ford had a final audience with Ford Nation earlier today, as the controversial local politician was laid to rest following his funeral at St. James Cathedral in the city’s downtown core. Ford, who died last week at age 46 from a rare form of cancer known as pleomorphic liposarcoma.

Flanked by marching supporters and loved ones, including his wife, Renata, children Stephanie, 10, and Dougie, eight, and older brother Doug Ford, Rob Ford’s body was taken from city hall this morning, where it lay in repose for the past two days, to the cathedral.

“I know my dad is in a better place now. He’s the mayor of heaven now,” Stephanie Ford said of her father during a speech during the service, while Doug Ford exclaimed, “I’m going to miss you like crazy. I love you more than anything in the world.”

Loved ones attended a private burial and a public celebration of Ford’s life will be held tonight at the Toronto Congress Centre.