Northern Alberta on Fire: Scenes From An Apocalypse 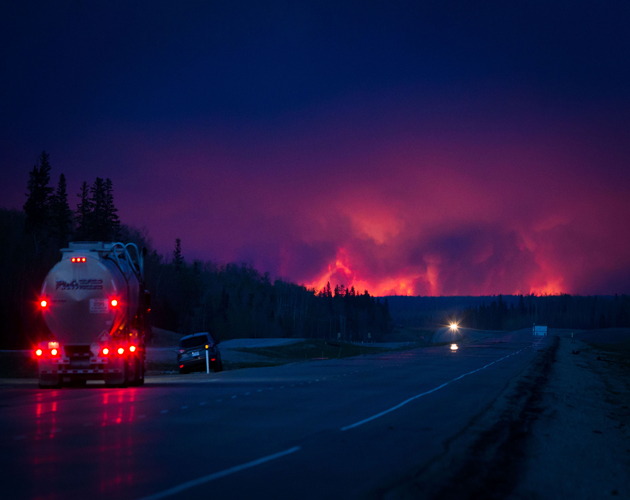 The massive fire in Northern Alberta has produced some shocking, terrifying and apocalyptic scenes. As the battle to quell the fires continues to rage and communities retreat from its destructive reach, we look at the sights and sounds and how Albertans are standing strong in the midst of the disaster.

How you can help

Feds will match your donation

“Today, I’m pleased to announce that in addition to the government of Canada providing future assistance… the government will also be matching individual charitable donations made to the Canadian Red Cross in support of disaster relief.” – Prime Minister Justin Trudeau

“This fire will look for them and it will find them, and it will try to take them. And our challenge today is to try to prevent that.” – Wood Buffalo regional fire Chief Darby Allen

“It was the most frightened I’ve ever been in my life…It was like driving into the Apocalypse.” – Russell Thomas on fleeing Fort McMurray by car, in the midst of the fire.

It cannot be contained

What started the blaze?

“At this time of year, human causes are generally what we see, but we’ve also had lighting fires early in the season, so at this point we’re working with investigators.” Chad Morrison, Senior wildfire manager

Incredibly, 88,000 were evacuated without any injuries or death

“I’m very thankful that myself and my friends and family are safe. The city, police, firemen and everyone else who helped were amazing. Including nearby towns.” – Fort McMurray resident Jason Edmonson

My harrowing drive evacuating #ymm praying for my friends pic.twitter.com/XGFWfavqR2

The view from the air is heartbreaking. Thanks to everyone working hard to get this fire under control. #ymmfire pic.twitter.com/uZ3GBLlqAW

“I lost my son last year and that was 1,000 times worse. It’s why people need to evacuate, need to get out. You can replace stuff, things, but you can’t replace a life.” Leader of Alberta’s Wildrose Party, Brian Jean (@BrianJeanWRP) who lost his son last year now has his home demolished by the fire.

Her Majesty sends her best

“Prince Philip and I were shocked and saddened by the news of the wildfires that are causing such devastation to Fort McMurray. Our thoughts and prayers are with all those who have been affected, and we send our heartfelt thanks to the firefighters and the other emergency workers.” – Elizabeth R

“As we look to the future, this is still a place of incredible strength, resiliency and vibrancy.” – Melissa Blake, Fort McMurray Mayor

We lost our house. We lost everything, but we didn’t lose our spirit.” – Chantelle Boutin, Fort McMurray resident