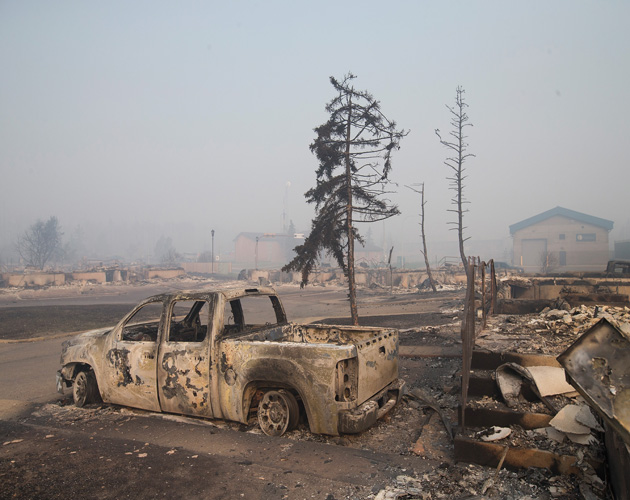 In the days of before the Northern Alberta fires began burning uncontrollably – causing the evacuation of the entire town Fort McMurray – Premier Rachel Notley accused opposition leader Brian Jean of “fearmongering” and “grandstanding” when he voiced concerns over the province’s wildfire preparedness.

Please donate to the Canadian Red Cross Alberta Fires Appeal: The government of Canada will match all donations.

The exchange took place on May 3 in the Alberta legislature. Premier Notley took issue with Wildrose Party leader Jean when he asked her if NDP budget cuts had left communities like Fort McMurray dangerously exposed to wildfire, especially during this abnormally hot and dry spring.

Here’s a shortened version of their exchange. The complete official transcript is here.

Mr. Jean: In Fort McMurray neighbours, friends, and oil sands workers have either had to leave their homes or watch as fires burn very closely to them on the border of our city. Albertans are worried that the NDP doesn’t know what a serious threat these wildfires are … How can the Premier possibly defend these types of decisions, putting our communities in Alberta at risk?

Mr. Jean: In February a tender was issued for a water-skimming air tanker group. On April 29 this government cancelled the tender. All water-skimming aircraft currently contracted are from Abbotsford, B.C., based Conair. Can the Premier please explain right now to Albertans why this contract was scrapped and why we are settling for slower, short-range, smaller, and less capacity water tanker aircraft?

Ms Notley: [W]e’ve made it very clear and all the contractors know full well that when we need them, they need to be there. They are there. They are being hired. Every resource that is required is being dedicated to this fire, and the members opposite should stop the fearmongering.

Mr. Jean: This is not fearmongering, Mr. Speaker. You can’t cut $400 million from wildfire management and say that you’re serious about fighting these fires … Will the Premier today reverse these terrible decisions so we can make sure that our communities and Albertans are safe?

Ms Notley: [W]e have access to the same number of tankers and all the same amount of equipment that we had before, and we will use that and more, if necessary, because we are concerned about getting the job done in Fort McMurray. We are not interested in engaging in political grandstanding and fearmongering.