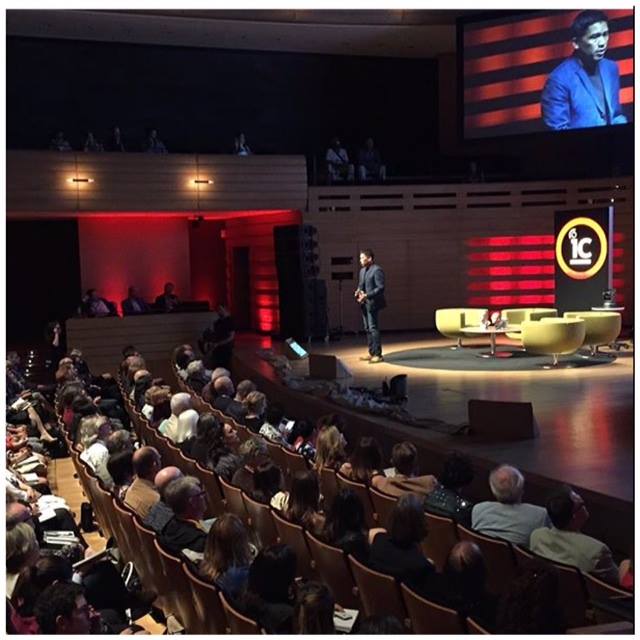 The first day of ideacity 17 is in the books and we’ve collected some of the biggest highlights and best quotes from today’s roster of idealists.

OVERHEARD AT IDEACITY: “If an industry is doing something that doesn’t make sense to you, I encourage you to ask some questions and follow your doubts.” – Albert Schultz

THE DAY’S HIGHLIGHTS INCLUDE…

PRAISE FOR PRIME NUMBERS: Playwright turned mathematician and author Dr. John Mighton, trumpeting the importance of prime numbers in all walks of life, illustrated why he believes “the number 17 is a beautiful number”: it’s a “twin prime” number, it plays a prominent role in interior design, Sudoku puzzles need 17 numbers to work perfectly and Haiku have 17 syllables. And, of course, this year marks ideacity’s 17th installment.

He also noted that “Math is like a ladder – if you miss a step it’s hard to go on” – a point he proved when he tested the audience with a long division equation. I wasn’t the only one in attendance revealed to be clinging to the bottom step of that math ladder.

MEMORY MASTER: Dave Farrow, the Guinness World Record holder for greatest memory, once memorized 59 decks of shuffled playing cards (3,068 cards) after a single sighting. He even taught the audience to strengthen their own memories, using images to help us recall a list of 17 random items. For the record, genius level memories are said to be able to recall nine items so, you know, no big deal. Then, the man with the master memory forgot the name of the conference and called it “idea village.” But until we can memorize more than 3,000 randomly-shuffled playing cards in a row, we’ll cut him some slack.

BLOCKCHAIN REVOLUTION: Alex Tapscott, business man and co-author of Blockchain Revolution: How the Technology Behind Bitcoin is Changing Money, Business and the World, declared “This is a very exciting time … It turns out the technology likely to have the greatest impact on the world in the next 20 years has arrived.” That technology? Blockchains.

THE SPACE ELEVATOR: One day it may be possible to build an elevator to outer space – or pretty darn close at least. Dr. Brendan Quine, the man leading the charge for the ThothX Space Elevator, paints the picture of a 20 km high elevator that would contain hotels and restaurants. It would be built to withstand a category five hurricane and take an hour to get to the top. Once there, for $1000 a person, you could take a a plane from the top into low Earth orbit and enjoy the sort of views they see on the International Space Station – a personal vacation on which can cost an individual $90 million dollars.

RIDING THE ELECTRIC HIGHWAY: Braden Limb, a mechanical and aerospace engineering PhD candidate, says the transition from gas-powered cars to electric would be smoother than from horses to horsepower. Armed with his idea for wireless, in-motion charging pads, which would be built into roads to charge electric vehicles as they pass over them, put it to an audience poll, asking how many in attendance own a conventional car:

“My vision is that … every person that raised their hand today when I asked if they own a conventional vehicle would raise their hand in the future when I ask how many people own a wireless power transfer vehicle. Can you imagine how powerful that would be?

“The boomers are funding the companies the millenials are starting,” he noted, while discussing the emerging new breed of capitalism and how “Tech is a horizontal force enabling our entire economy.”

THE PLAY, AND THE COMPANY PRESENTING IT, IS THE THING: Soulpepper Theatre founder and artistic director Albert Schultz discussed his company’s unique approach to the art they present on the stage and, increasingly, various other media platforms.

By cultivating creative talent and productions in house, Schultz bucks industry trends by fostering work that can then be disseminated on multiple digital and entertainment platforms, creating a multimedia entertainment company with the theatre at its core. “If you can exploit a work of art, you free the artist themselves.”

In the interview with EverythingZoomer.com below, Schultz explains this, as well as his vision for the future of Soulpepper Theatre Company.