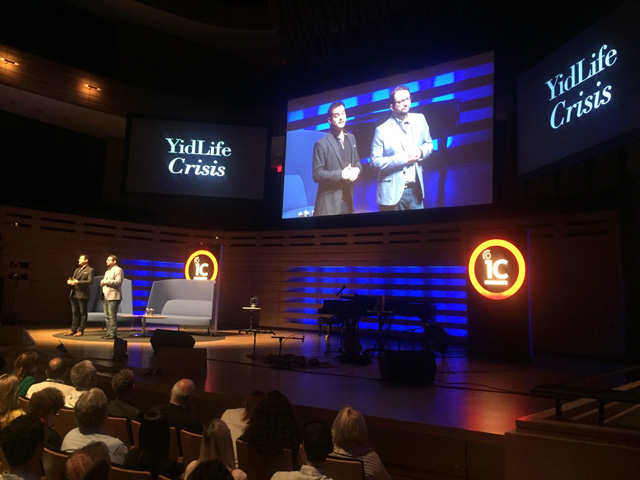 What the idealists and guests were talking about on day two of ideacity 17.

HIGHLIGHTS OF THE DAY

MEDITATION MORNING: “I’m going to invite you all to align with the divine,” international intuition expert, medium and best-selling author Colette Baron-Reid told the audience as she helped open day two of ideacity 17, taking the stage with composer and musician Justin Gray to lead the crowd in some morning meditation.

HOLY CALLING: Rev. Maggie Helwig always felt she was called to the church but she wasn’t ready to fully accept her calling until she was 50. Now, this writer turned Anglican reverend presides over St. Stephen-in-the-Fields in Toronto’s Kensington Market. She spoke about the similarities between her two vocations:

“I think being a priest and being a writer are vocations that have some similarities. First of all, they’re the occupations of generalists…But more significantly, both are callings to a profound responsibility. Both should be governed by deeply counter-cultural values. Both link us to communities that exist across time and space, communities of language and thought and faith. And both will compel us to go into the darkest places of the street and darkest places of the psyche knowing that we may do little good there but that we must bear witness.”

SERVING LIFE: In keeping with the spirit, so to speak, of the God Pod, businesswoman Stacey Campbell told the story of how she quit her job, went back to school to earn her Masters of Divinity degree and sold her dream home to move her family closer to local prisons, where she began working with Prison Fellowship Canada. Compelled by her Christian faith to work with prisoners, their families, ex-prisoners and victims, Campbell says the idea that punishment equals justice in our prison system is completely wrong. “The idea that somebody must pay is really strong in our culture. And I’m suggesting we must change that.”

She called for greater understanding and compassion when it comes to prisoners and for the corporate to rethink stable employment for ex-convicts to help decrease the high recidivism rates. She is now the CEO of Prison Fellowship Canada. Still, her guiding principles are rooted in her faith.

“The transformational power of God in a prison,” she says “is something I could not bear witness to anywhere else.”

YIDLIFE CRISIS: The biggest laughs of the day came courtesy of Jamie Elman and Eli Batalion, the men behind the comedy series YidLife Crisis, as they explained their journey from being raised Jewish in Montreal to taking the Yiddish language and using it to launch a comedy show, including a clip from an episode co-starring actress Mayim Bialik. They also couldn’t quite figure out why they were invited to ideacity, quipping, “We thought that like an after dinner mint, or in Jewish-speak a Lactaid pill, we can help with the digestion.”

PROUD DISRUPTER: “Sustainability isn’t just a nice thing to do – it’s essential to stay in business and essential to life on this planet,” says Jim Harris, one of North America’s foremost thinkers on disruptive innovation. Citing companies like Uber, Airbnb and Facebook – which use but don’t actually create cars, hotels or content – Harris discussed companies that are innovators when it comes to business models. Even McDonald’s, he noted, doubled their profits when they introduced the drive-thru. He posited that simple steps like developing apps and profiting off arbitrage will completely revolutionize businesses moving forward. “For the reasons that we need to profoundly change to save our planet, it’s the same reasons we need to profoundly change to save our businesses.”

MOVING PEOPLE FORWARD: Barbara Alink earned a standing ovation from the crowd when she discussed the impact of her father’s passing on her and her ensuing quest to design a mobility device, called the Alinker, that would allow an aging population and those with disabilities to enjoy mobility with dignity.

PIG POWER: “When you talk about food you’re very quickly talking about power and politics and the way society organizes itself. This is particularly true with pigs.” Science author and pig expert Mark Essig chronicled man’s love affair with pork, from the Romans’ plethora of pork recipes through to Henry Ford’s trip to a pork factory, which inspired his idea for an assembly line, while also arguing for a better means of raising pigs for human consumption, including raising them in forests and feeding them acorns.

TREE OF 40 FRUITS: Through the process of grafting – taking a limb from one tree and attaching it to another to allow its fruit to grow on the new tree – Sam Van Aken has developed a tree of 40 stone fruits, including apricots and plums. Propelled by a goal to preserve genetic diversity and offer more authentic fruit than larger farms that mass produce it, Van Aken has grown 21 trees of 40 fruits at 17 different sites so far.

TO HAVE SEX, OR NOT TO HAVE SEX, WITH A ROBOT: David Levy, author, former chess champion and president of the International Computer Games Association, made his second appearance at ideacity, championing the possibility of robots built for sex. Meanwhile, Dr. Kathleen Richardson, senior research fellow in the Ethics of Robots at De Montfort University in the U.K., believes this raises a grave ethical problem. The two presented their arguments and then debated their positions in a discussion moderated by ZoomerMedia founder Moses Znaimer. On the pro-sex with robots side is the argument that people with difficulties developing relationships, or who struggle with issues that prevent the development of relationships, can find companionship in a robot that can help alleviate their loneliness and sexual tension. “I think for these people, sex robots will fill a huge void in their lives and make them much happier. And I think giving more happiness to mankind must be a good thing.”

On the con side is the argument that this sort of practice objectifies women by portraying them as commodities and is almost comparable to prostitution. As well, by offering a simplistic solution to those aforementioned isolated individuals, the sex robots would only reinforce the loneliness they endure. “This outlook,” Dr. Richardson says, “would spell the end of humanity.”

And so the debate continues….