Black Lives Matter: The Revolution Will Be Live-Streamed 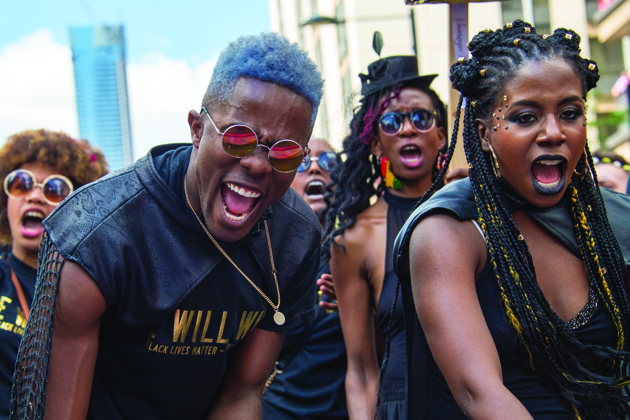 The fuse, in reality, has burned for decades, through the 1970s and ’80s to the Rodney King beating, fear of race riots if the O.J. Simpson verdict went the other way to #OscarsSoWhite. As in 1965, the demand remains equality. And, also, please stop killing us. Back then, though, there were no smartphone videos to carry the echo of the fatal gunshot into homes across the country. Today, the revolution is not only televised—it’s live-streamed on Facebook. Politicians and church representatives march, but they no longer lead. MLK gave way to BLM singing Kendrick Lamar’s “We Gon’ Be Alright” in unison as they demonstrate.

The Stand in the Schoolhouse Door has morphed into a vocal opposition that asserts that “all lives matter” and demands the removal of black actor Jesse Williams from Grey’s Anatomy after his call to action speech at this year’s BET Awards. Rudy Giuliani, dubbed America’s Mayor after the Sept. 11 terrorist attacks, declared that the BLM movement is “inherently racist.” Mark Fuhrman, the former LAPD officer infamous for racist remarks unearthed during the O.J. Simpson trial, dismissed police shootings as a “micro-moment” in history the day after a peaceful protest in Dallas concerning two seperate killings of unarmed black men by police officers in 48 hours ended when a disturbed African-American killer downed five police officers. Cops killed the assailant with a bomb-carrying robot—a far cry from robo-housekeeper Rosie on The Jetsons and how we believed, in the 1960s, machines would serve us in the future.

Then, Friday, September 16, 2016, a police officer in Tulsa, Oklahoma, shot 40-year-old Terence Crutcher dead as he stood with his hands raised next to his vehicle in the middle of the road, allowing him to lay in a pool of his own blood for minutes before checking on him. Four days later, 43-year-old Keith Lamont Scott was shot dead by police in a Charlotte, North Carolina parking lot, igniting violent protests that lasted through the evening. There is still a question as to whether Scott was brandishing a gun at the time of his shooting, but there’s no question at all that Ahmad Khan Rahami, the man who planted and detonated multiple bombs in New York City and New Jersey last weekend that injured dozens, was armed. In fact, police apprehended him alive after a shootout. Keep that in mind—a suspect who isn’t black but who is an active shooter is taken alive, while numerous unarmed black citizens, most not even acting hostile let alone attacking police outright, are killed on the spot.

In response to such incidents the BLM protests, like the Selma marches at first, are often pegged as provocative. But the speed with which activists and artists can communicate and affect change today couldn’t be imagined in the 1960s. Hit television shows like Black-ish and musicians from Beyoncé to Snoop Dogg are actively prompting discussion. Even Batman himself took pause in a 2015 issue of a comic that dealt with the police shooting of an unarmed black teen.

And the movement has spread internationally, including to Canada, which boasts a history of absorbing American civil unrest. The 19th century brought the Underground Railroad and American slaves escaping to Canadian locales throughout Ontario as well as Vancouver Island, New Brunswick, Nova Scotia and Quebec, while in the 20th century we offered refuge to draft evaders fleeing conscription into the Vietnam War.

Most recently, Americans threatened to move north if Mitt Romney was elected president in 2012 or if Donald Trump wins the White House in November. And we are rich in our own protest culture, from Aboriginal People and the Idle No More movement and protests over inaction surrounding the disappearance and murder of women in their communities to BLM protests over issues related to police brutality, carding of people of colour and the rights of black LGBT community members, like the sit-in at this year’s Toronto Pride Parade—itself an institution rooted in protest. Even Remigio Pereira, a member of the group The Tenors, thought he was making a righteous stand by altering the lyrics of O Canada to include the phrase “all lives matter” before brandishing a sign with the phrase—all without consulting his bandmates—at the 2016 Major League Baseball All-Star Game in July. He was roundly criticized and removed from the group. Still, the fact that commentators seemed more upset about the race-related connotations of his statement than the altered words of the anthem proves that people are waking up to the injustices spotlighted by BLM.

The hard truth is that, while history always sides with progress, sometimes that progress takes a lifetime. And, sometimes, tragically, it takes lives. There’s a battle outside, and it’s ragin’. The times, they are still a-changin’.

A version of this article appeared in the September 2016 issue with the headline, “The Revolution Will Be Live-Streamed,” p. 16-17.