Sam Oosterhoff: A Boomer’s Opinion On The 19-Year-Old Ontario MPP 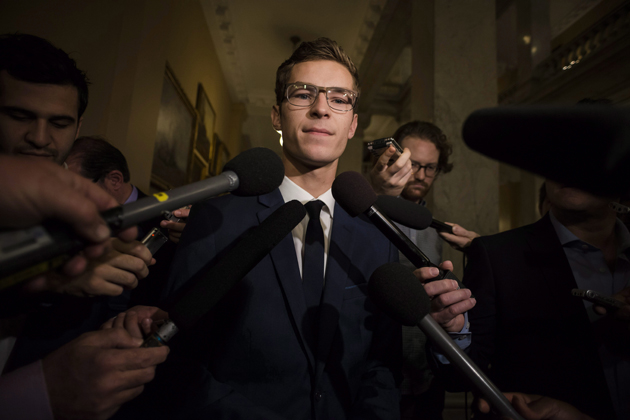 Ontario MPP Sam Oosterhoff has neither the life experience nor the education, let alone the maturity, to make decisions that affect the lives of others.

I’m all for us aging boomers giving up some space and power to the up and coming young ‘uns, but I draw the line at having a teenager who’s a first year student at Brock University making decisions that affect my life or the lives of people in this province.

I’m talking, of course, about 19-year-old Sam Oosterhoff, the newest Ontario MPP, sworn in this week to represent Niagara West-Glanbrook.

The boy wonder was backed by his socially conservative Reformed Church which reportedly brought out the vote.

The Reformed Church maintains that acting on the desire for someone of the same-sex is sinful and represents “broken sexuality.” The Church forbids “participation” in a same-sex marriage which presumably means not only officiating at such an event but even attending and celebrating it.

Now, it seems there are members of the Reformed Church who are less didactic about “the word of God” and more accepting of Canada’s inclusiveness and tolerance.

Unfortunately, Sam Oosterhoff isn’t one of them.

Whether by design or by circumstance—he says everyone in his family wasn’t able to attend on Monday—his swearing in was delayed by the Tories until the day after the All Families Are Equal Act was passed unanimously by the legislature.

The Act gives legal recognition to same-sex parents so they can register the births like any other parents instead of having to go to court so they can legally “adopt” their own children.

It also provides for a birth parent to enter into a parenting agreement with up to three other people before a child is conceived, giving legal protection to surrogates, sperm donors and adopting same-sex parents.

But although he wasn’t there for the vote, the kid called it a “horrible piece of legislation.”

He also took exception to the gender neutral language.

“I would have preferred if it hadn’t removed ‘mother’ and ‘father’ from large sections of law,” he said. “That concerns me.”

Well, here’s what concerns me—and it’s not that he practices his religion or holds these beliefs. It’s not even just that he’d like to impose these beliefs on the rest of us.

What concerns me even more is that wet-behind-the-ears Oosterhoff has neither the life experience nor the education, let alone the maturity and exposure to the wider world, to make decisions that profoundly affect the lives of other people, to question the indoctrination he’s experienced and to think for himself.

That said, I’m a big believer in Article 25 of the Reformed Church.

It states that the members of the church who are responsible for exercising “admonition and discipline along with pastoral care in the congregation, (who) shall participate in and promote evangelism, and shall defend the faith” are the elders.