John Glenn, The First, and Oldest, American Astronaut To Orbit The Earth, Dies At 95 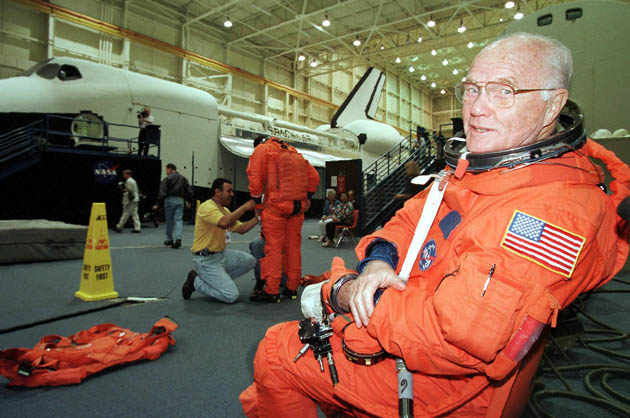 The 95-year-old “American hero of the space age”—and last surviving member of the Mercury Seven—died Dec. 8 at a hospital in Columbus, Ohio.

In 1962, John Glenn rocketed to instant fame when he became the first American to orbit Earth during the much-publicized “space race” between the United States and the Soviet Union.

His death was announced on Dec. 8, 2016 by Hank Wilson, the communications director at the John Glenn College of Public Affairs at Ohio State University. The cause of death is unknown at this time, but in 2014 Glenn suffered a stroke after heart-valve replacement surgery.

Glenn is survived by his wife and two children, Carolyn and John, and two grandsons.

The freckled Ohio native was one of the seven original astronauts in NASA’s Mercury program (the members were known as the Mercury Seven) and, although he wasn’t the first American in space, his three-orbit navigation around Earth made headlines across the globe.

Glenn began his career in the Marine Corps before moving up the ranks and becoming a colonel. He flew a combined 149 combat missions during the Second World War and Korean War and acted as a test pilot in the 1950s.

But it was Glenn’s 1962 space mission that was hailed as a “national catharsis unparalleled” by author Walter A. McDougall. When the astronaut returned home, he received a hero’s welcome and was invited to the White House by President John F. Kennedy.

And part of Glenn’s charm was his reluctance to see himself as any sort of hero: “I figure I’m the same person who grew up in New Concord, Ohio, and went off through the years to participate in a lot of events of importance,” he said years later. “I don’t think it was about me. All this would have happened to anyone who happened to be selected for that flight.”

Thirty-six years after his Mercury mission, Glenn returned for one last orbit of the Earth. He set off on the space shuttle Discovery on October 29, 1998.

At 77, he was the oldest person to go into space—and, once again, captured the hearts of his nation.