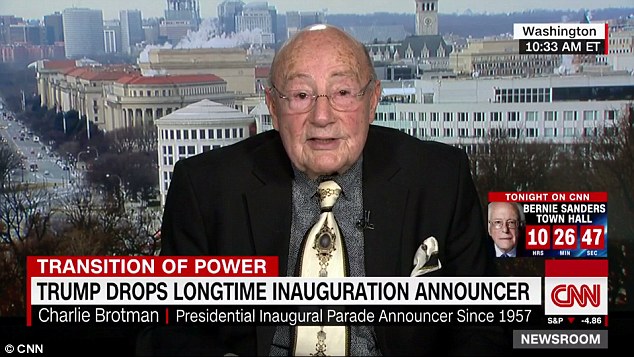 The presidential inauguration parade will feature a new announcer for the first time in almost six decades.

Charlie Brotman, who’s announced the inauguration parade since Dwight Eisenhower entered his second term in 1957, has been replaced by Donald Trump.

The 88-year-old was informed via email by the Presidential Inaugural Committee and says he was shocked and “traumatized” to hear the news. Replacing Brotman is Steve Ray, an MLB broadcaster who volunteered for Trump’s presidential campaign.

While disappointed, Brotman seems to be in good spirits during an interview with CNN. “It’s great for my ego,” he says with a smile when asked what the job has meant to him. “Nothing is forever.”

It’s great to see he’s taking it all in stride.