Watch: President Trump Anything But Presidential In Inaugural Address 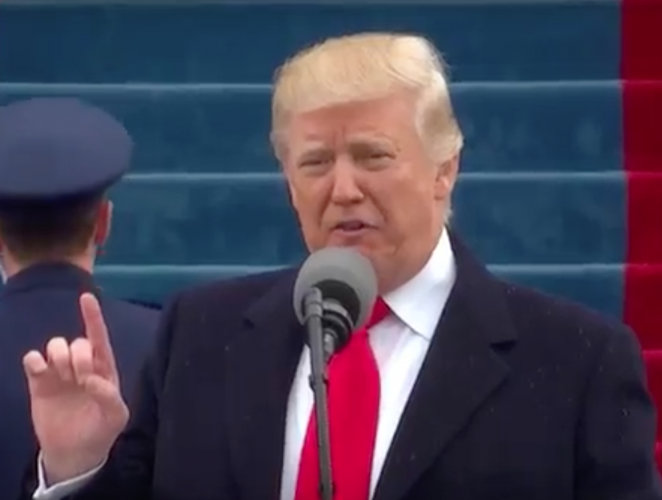 President Donald Trump managed to hammer home a few campaign promises, slight his running mate and insult his predecessors all in a cool 16-minute inaugural address.

If there was even a shred of hope that Donald Trump would undergo some sort of miraculous conversion and suddenly be transformed by the oath of office into someone who was presidential and and gracious, who would begin to bind the country together, that hope was dashed during his peevish, scolding, polarizing 16-minute inaugural address.

And remarkably, memorably, he declared, “This American carnage is over.” Carnage? The country is thriving. Even the pro-Republican Wall Street Journal says so. But Trump insisted that “the establishment protected itself, but not the citizens of our country. Their victories have not been your victories; their triumphs have not been your triumphs.”

Nevertheless, his cabinet appointments are solidly establishment. In fact, they’re established billionaires. Six are former Goldman Sachs executives. And exactly how have Trump’s own triumphs, wealth and status been shared with the little people? It’s been reported that he’s stiffed contractors and cheated Trump University students.

He also made a point of mentioning “radical Islamic terrorism” and promised to “eradicate ISIS from the face of the earth.” It’s a grandiose, bombastic statement that is, as NBC’s Tom Brokaw observed, “quintessential Trump.”

Most worrying for Canadians, Trump doubled down on “America First.” “For many decades we’ve enriched foreign industry at the expense of American industry,” he declared. “From this day forward, a new vision will govern our land. From this day forward, it’s going to be only America first. America first.” He added, “We will make America wealthy again.” But the New York Times noted, “American has never been wealthier.” The problem is that the wealth is in the pockets of people like Trump and his cronies.

But also churlish is what Trump did not say. He did not acknowledge Hillary Clinton, who courageously and graciously attended the inauguration, as difficult as that must have been. Someone must have told him just how churlish that was because at the lunch later, he began a brief speech by thanking Bill and “Secretary Clinton” for being there and asked the gathering to give them a standing ovation. Maybe, just maybe, President Trump will learn to take the best advice he can get and learn, little by little, how to be a mensch.

In the end, the most hopeful and comforting words addressed to the American people today were spoken by former President Obama, at Andrews Air Force Base, just a hour after Trump took office, as the Obamas boarded a flight for a well-deserved vacation in Palm Springs, California. Referring to the new era in Washington, he said, “This is just a little pit stop. This is not a period, this is a comma in the continuing story of building America.”