Trumped Up Speeches: Presidential Quotes As Delivered By The Donald 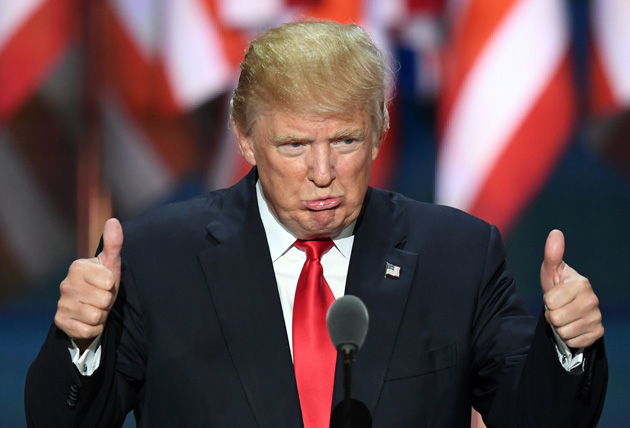 “Borrowing” lines from other people’s speeches is nothing new for the Trump family.

Remember when Melania helped herself to Michelle Obama’s words during the Republican convention?

So why couldn’t Donald uphold the family tradition and plagiarize famous lines from the inaugural addresses of former presidents—with his own inimitable twist, of course.

2. Franklin Delano Roosevelt, 1933:
“The only thing we have to fear is fear itself.”

Donald J. Trump, 2017:
The only thing we have to fear is falling favourability ratings, Muslims, Mexicans, the media (except for Fox and the National Enquirer), Meryl Streep, Rosie O’Donnell, Democrats, the world and everybody in it who isn’t me or my family or my sycophants.

Donald J. Trump, 2017
Today I can declare: Government is the problem and caring about anybody who is not a real estate billionaire is not the solution. I—and I alone, along with Jared and Ivanka—am the solution.

4. Abraham Lincoln, 1865
“With malice toward none, with charity for all, with firmness in the right as God gives us to see the right, let us strive on…, to do all which may achieve and cherish a just and lasting peace among ourselves and with all nations.”

Donald J. Trump, 2017
With malice toward everyone who opposes me, with charity for no one, with firmness in our God-given right to rule as the extreme right. To do all which may achieve prosperity for the 1 per cent and cherish a just and lasting policy to increase the wealth among ourselves (meaning the Trump family) and to f—k all other nations.

5. Harry Truman, 1949:
“The United States and other like-minded nations find themselves directly opposed by a regime with contrary aims and a totally different concept of life.”

Donald J. Trump, 2017
The United States (meaning me) finds itself directly allied to a regime (meaning Putin), with coordinated aims and a totally similar concept of life (grabbing whatever you want).