Presidential Promises: Can Donald Trump Keep His Pledges to Americans? 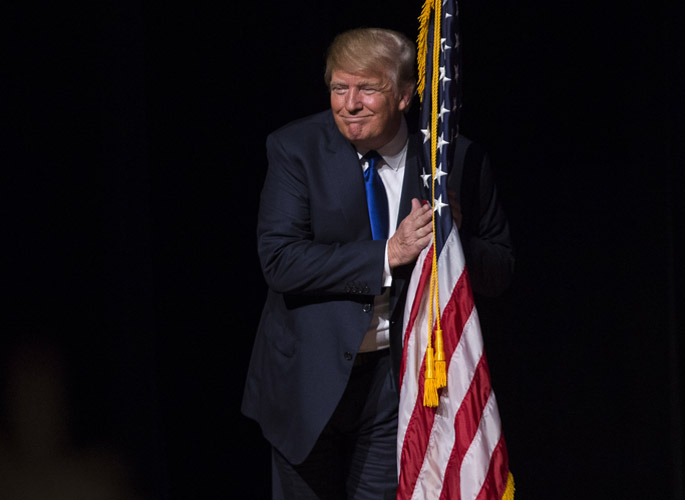 It’s time to face facts: the U.S. presidential race is over and, despite all the insults and intelligence leaks, the American election yielded one definitive winner: Russia. Fine, if you want to get technical about it, Hillary Clinton won—the popular vote, at least, by a tally of about three million. And yet, thanks to the magic of the electoral college, it’s Donald Trump who inherits the Oval Office, though between backpedalling on campaign promises and his plummeting approval rating, the bloom is already off this presidential rose.

Some might liken the feeling to buyer’s remorse after purchasing a sub-par condo built by a developer with weird hair and tiny hands (random example off the top of my head). At first that condo may have seemed like a good investment but, once the papers are signed, you discover it’s smaller than advertised, it has this weird orange tint and the voice on the computerized “smart” refrigerator rants about illegal Mexican immigrants every time you press the button to get some crushed ice.

But I digress. The fact is, President Donald Trump entered the White House with one of the lowest approval ratings of any modern president. Aside from immediately stepping down from the job, the only way Trump is likely to boost his popularity, at least among far-right Republicans and folks who wear leather vests with the confederate flag sewn on the back, is to come through on the campaign promises that helped win him the election in the first place.

Before even entering office, however, Trump’s already reneged on some key pledges. To start, despite promising to appoint a special investigator to look into Hillary Clinton’s use of a private e-mail server, and even revelling in chants of “lock her up” at his campaign rallies, Trump did a post-election 180 by declining to prosecute her, claiming it would prove “divisive” to the country—a claim that was nearly crushed beneath the weight of its own irony. He also pledged to build a border wall between Mexico and America and to make Mexico pay for it. It turns out now that American taxpayers are footing the bill, with a faint promise that he’ll get Mexico to reimburse them. Strange … it’s almost as if he just made these silly promises to con the lowest common electoral denominator into voting for him. Hmmm…

But what of the bigger, more important promises—the ones that swayed moderate voters to hold their noses and vote for Trump? Can the new president actually follow through? Lets examine five of the main pledges he made below.

#DrainTheSwamp proved a favourite social media hashtag among Trump supporters during the election. It’s based around the idea that Trump is a man of the people and, if voted in, he’d rid Washington of all the no good “establishment” politicos. Because, of course, everyone knows that no one cares more about the little guy than the rich right-wing dude who literally lives in a golden penthouse. Nevertheless, Trump railed against Hillary Clinton for supposedly cozying up to Wall Street types and for colluding with her fellow Washington elites to run the country into the ground. He even railed against his own party, accusing almost anyone who criticised him of being a government puppet.

To no one’s surprise, except, perhaps, those who actually voted for him, Trump hasn’t only failed to drain the swamp, but he’s surrounded himself with swamp creatures in Washington. As The Atlantic noted, Trump’s violated his own calls for government transparency by refusing to abide by the age-old presidential tradition of releasing his own tax returns. And, as Newsweek points out, “Trump has tapped insiders including high-profile Republicans and individuals from the business world. For White House chief of staff, he has chosen Reince Priebus, who has served as chairman of the Republican National Committee and of the Republican Party of Wisconsin. Among his earliest picks were Kansas Representative Mike Pompeo for CIA director and Alabama Senator Jeff Sessions for attorney general … Trump has tapped former Goldman Sachs banker and wealthy loyalist Steven Mnuchin for treasury secretary, and billionaire investor Wilbur Ross for commerce secretary. His nominee for transportation secretary, Elaine Chao, served in former President George W. Bush’s administration—and is the wife of Senate Majority Leader Mitch McConnell.”

And that’s just the tip of the iceberg—or whatever the swamp equivalent of an iceberg is. The tip of the algae-encrusted mound of sludge?

2. Bring back our jobs

It’s hard to get booed on the campaign trail when you boast about bringing jobs back to America, especially when you call out specific companies for outsourcing jobs. Remember when Donald Trump refused to eat another Oreo because the parent company, Nabisco, moved a factory to Mexico?

Of course, as the Washington Post, illustrates, on this point Trump is more of a “do what I say, not what I do” president, having himself owned companies that make shirts (in Bangladesh, China and other countries not named “America”), suits (in Mexico), china and crystal (in Slovenia), eye glasses (in China), vodka (in the Netherlands) and home décor items—yes, really (in Turkey)—to name a few. Still, that doesn’t mean that he couldn’t bring jobs in other people’s companies back to the U.S., right?

Well, to start, even the president can’t just force companies to bring back/keep jobs in America. There’s no law against leaving and incentives like easing regulations and adding tax breaks “are minor expenses for most companies, particularly in comparison to their payrolls,” according to the New York Times. Consequently Trump could try to punish those who leave with tariffs when importing their goods back to America, but even then the paper notes, “… he cannot target particular companies. Any such tariffs would have to be broad—and therefore broadly painful.”

Another side to his promise revolves around revitalizing industries that, either due to a drop in demand or advancements in technology, employ far fewer labourers. Coal and steel are two industries that fall into that category, the former declining in part due to natural gas and other energy sources that are far cheaper and the latter due to the need for less people to operate the machinery that does much of the work. As well, lets not forget that some companies buy their steel from foreign countries, including—you guessed it—Donald Trump, who built at least three major real estate properties with Chinese steel. Evidently, you don’t make enough money to live in a gold penthouse by buying American.

Of course, that hasn’t stopped Trump from bragging about all the jobs he’s supposedly already brought back to the country—including through companies like Ford and Sprint, both of which later showed that Trump had little or nothing to do with their decision to create new jobs in America.

However, Trump could still save face by investing in infrastructure jobs in the U.S., right? He could, but even that plan has issues. As the New York Times noted, Trump’s political opponents are “likely to resist efforts to waive environmental rules or prevailing-wage protections for construction projects” while his own party, “may balk at a big spending program that adds to the federal budget deficit.”

Speaking of deficits and national debt…

3. Wipe out the national debt

How does the U.S. president, even in an eight-year term, erase a $20 trillion national debt? No one seems to know, least of all Donald Trump, though he’s never let facts get in the way of an empty promise. He’s done little to explain his plan, but from what we do know—a lot of it is based around tax cuts—experts suggest his strategy would actually add more than $5 trillion to the national debt. If he also intends to follow through with beefing up the military, that plan alone could add $100 billion to the budget.

About a week ago, a screengrab of an unidentified man’s Facebook post, in which he decried Obamacare and lauded the Republican effort to repeal it, went viral because he noted he was covered by the far superior Affordable Care Act. Of course, Obamacare and the Affordable Care act are the exact same thing—the former is just a nickname opponents gave to it to rally their base around their cause—and that idiotic Facebook post came to symbolize the ignorance of a swath of the population who are about to lose their healthcare because they didn’t realize they were supporting Donald Trump’s pledge to repeal and replace it. A recent segment on Jimmy Kimmel Live painfully illustrated this point.

Of course, the repealing part is easy—Republicans have already begun the process. The hard part will be replacing it and ensuring tens of millions of Americans aren’t left without coverage. Trump, for his part, has provided little information as to how he plans to replace the Affordable Care Act beyond comments about possibly keeping some parts of the act he likes. Some might say the few details Trump’s team have provided so far are insufficient, while others are outright calling it “a scam.”

5. Get those immigrants outta here!

You may not remember it, as Donald Trump didn’t seem to make too much of an issue about it, but believe it or not he has a bit of a problem with immigrants—specifically the illegal ones he promised to deport if elected president. Now that he’s in the White House, he’s expected to tackle the issue in short order.

Some tenets of that promise, such as clamping down on sanctuary cities that assist undocumented immigrants, workplace raids, beefing up the number of immigration agents and pinpointing specific people for deportation, could conceivably begin relatively quickly.

But again, the process of expanding the ranks of immigration agents and jailing foreigners who enter the country illegally could prove too costly to enact. Then there are the constitutional barriers surrounding banning Muslims from entering the country and the fact that even House Speaker, and top-ranking Republican, Paul Ryan said Trump’s promise to deport millions of illegal immigrants is not in the plans. These ideas were among Trump’s main election promises but, like most of the other items on this list, they seem easier said than done.

It appears, in fact, that the millionaire who gilded his entire penthouse in gold doesn’t actually have a full grasp on the reality of the everyday issues facing America. Quelle surprise.