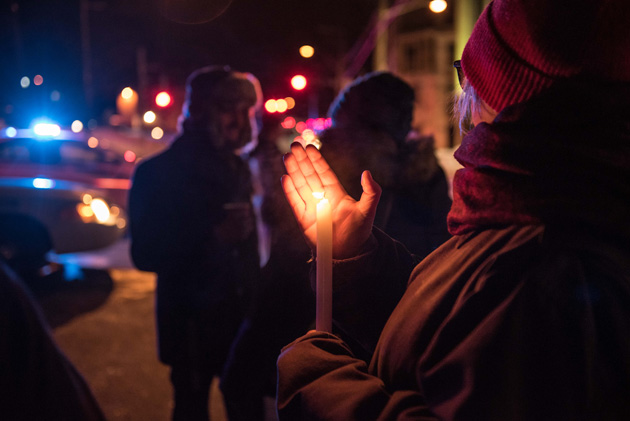 The fatal shooting at a Quebec City mosque Sunday night has Canada’s Muslim community in mourning and police searching for answers from the two men in custody.

Six men died in the shooting at the Centre Culturel Islamique de Québec (Islamic Cultural Centre of Quebec) on January 29, and an additional 19 people were wounded when two masked men entered the building around 8 p.m. and discharged their weapons.

The two alleged suspects have been identified as Alexandre Bissonnette and Mohamed Khadir.

Prime Minister Justin Trudeau issued a statement early Monday morning saying: “It is heart-wrenching to see such senseless violence. We condemn this terrorist attack on Muslims in a centre of worship and refuge. Muslim-Canadians are an important part of our national fabric, and these senseless acts have no place in our communities, cities and country.”

The tragedy occurs as U.S. president Donald Trump tightens his border entry policies against travelers from countries that have been identified as supporting terrorism. Trump signed the executive order on Friday, January 27, which suspended entry of all refugees from Iran, Iraq, Libya, Somalia, Sudan, Syria and Yemen, which has not only created chaos at airports but widespread criticism from leaders in Europe.

Obviously taking a shot at the U.S. travel ban, Trudeau issued this tweet:

The next day, Trump defended his order and showed the sharp differences the two countries have on immigration.