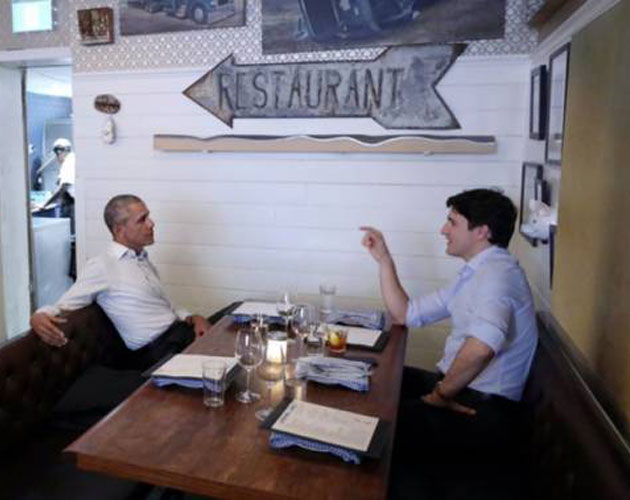 Barack Obama was in Montreal on Tuesday where he delivered a speech to the Board of Trade of Metropolitan Montreal and joined Prime Minister Justin Trudeau for dinner at a local pub.

Barack Obama, the former U.S. president, addressed a sold out crowd of 6, 000 in Montreal at a major address organized by the Board of Trade of Metropolitan Montreal on Tuesday.

After speaking fondly of the relationship between Canada and the U.S., the former president used the platform to critique current U.S. leadership—making good on a promise to speak out if necessary after his exit from politics. “I thought things would be a little more quiet for me over the first year,” Obama joked.

Without using his name, Obama hinted at Trump’s ignorance of climate change. “We are in an environment where we are only accepting information based on what our opinions are rather than basing our opinions on the facts we receive, and reason and logic,” he said.

In light of recent events, a large portion of Obama’s speech was dedicated to the most recent terrorist attacks. Commending the strength of the communities that were most recently affected, he highlighted the importance of unity.

“I’m convinced that ISIL will ultimately be destroyed and I know this not because of the power of our militaries and the sophisticated efforts of our law enforcement and intelligence agencies but because I know the character of our peoples,” Obama said. “And you can see it in the way the people of London and the people of Manchester before them and the people of Berlin and Paris have responded—with resolve not with blame, not with division but with a willingness to help people who are in need… That is why we’ll prevail.”

After the speech Obama met with Prime Minister Justin Trudeau for Dinner at the Liverpool House in Montreal.

“How do we get young leaders to take action in their communities?” The prime minister tweeted. “Thanks Barack Obama for your visit & insights tonight in my hometown.”

Exiting the restaurant, they were met with cheers from a large crowd that had gathered across the street. The two parted ways with a warm embrace—a far cry from the Kung Fu grip handshake that will likely cap off every encounter with President Trump from here on out.