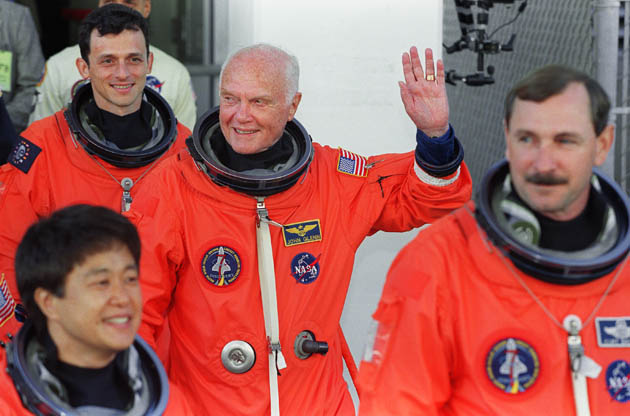 In honour of what would have been John Glenn’s 96th birthday, we look back at the astronaut’s enduring legacy.

You had to be there, in the ’60s, when the sky was no longer the limit, when John Glenn soared into space and orbited the earth, when Neil Armstrong walked on the moon.

The American space program that launched with Glenn’s three rides ’round the big blue marble in 1962 was a catch-up endeavour. It was a Cold War response to Russia’s getting there first, the year before, when cosmonaut Yuri Gagarin became the first human being to enter space.

These days, we’re hardly aware of who’s up there in some space station for months at a time although when Chris Hadfield became the first Canadian to walk in space we were thrilled all over again with the mystery and promise of space.

But space is no longer the pristine unexplored frontier of fantasy. It’s full of thousands of pieces of junk now and colonized by commercial enterprise. Today’s astronauts are following in the footsteps of the pioneers who were stepping out into the unknown.

We know more today but it may not compensate for what we’ve lost in recent decades.

John Glenn’s ride gave us a different perspective on this planet and its inhabitants. His was a time of breaking barriers and expanding beyond the status quo. Along with exploring space, we wanted to explore new and better ways to live on earth.

There were heroes then, people we admired for being brave, resolute and high-minded, not people famous for being famous on social media or reality television.

Certainly John Glenn was one of those heroes—daring, devoted to being of service and self-effacing. He declined the badge of heroism, insisting, “I don’t think it was about me.”

As a military pilot, he flew 149 combat missions during the Second World War and the Korean War and he served in Washington as a Democratic senator for 24 years.

At the age of 77, he flew again for NASA, becoming the oldest person to go into space. He explained in an interview that he wanted to show the world that the lives of older people did not need to be restricted by the calendar.