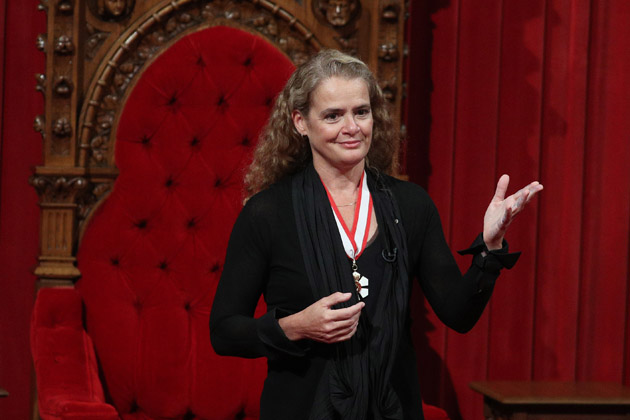 At 53, the former astronaut is one of the youngest Canadians to take the title of Governor General.

On October 2, Montreal-born Julie Payette took her oath to become Canada’s 29th Governor General at Parliament Hill in Ottawa surrounded by family, dignitaries, fellow astronauts and politicians. At 53, she is also one of the youngest people to take on the role—and only the fourth woman to serve as the Queen’s representative in Canada.

Payette was also presented with the ceremonial collars that mark her as chancellor of the Order of Canada, the Order of Military Merit and the Order of Merit of the Police Forces, as well as head of the Canadian Heraldic Authority.

Rideau Hall described the occasion in a press release as a “momentous day” and Trudeau described Payette as a trailblazer who inspires both kids and adults. In his speech during the ceremony, he called her an “exceptional Canadian” who is both an accomplished scientist and compassionate citizen.

“Your journey to space and through life may be unique, but the qualities that underpin each and every one of your successes are not,” Trudeau said. “Your numerous achievements are, above all, a testament to your hard work, discipline, and most importantly your passion…Whether as Canada’s chief astronaut or as an Olympic flag bearer, you represent the very best of what it means to be Canadian and to serve Canada with aplomb and integrity.”

For her newly-unveiled Coat of Arms, Payette chose a design incorporated all areas of her life: as an engineer, former astronaut, mother and Baroque music lover. The crest, featuring two standing Canada lynx atop a blue borderless planet, depicts a badge with an open wing next to a crown and topped by an astronaut’s helmet, a musical bar, and the motto “Per Aspera Ad Astra” which means “Through hardship to the stars.”

Flanked by two standing Canada lynx standing atop a blue borderless planet, the badge depicts an open wing, next to a crown, topped by an astronaut’s helmet, a musical bar, and the motto “Per Aspera Ad Astra” which means “Through hardship to the stars.” The two lynx in the crest are wearing of laurel leaves around their neck—”laurier” in French—for her 14-year-old son, Laurier.

Payette had family support with the attendance of her parents, sister, brother and son. A 21-gun salute sounded off outside as she signed the oath book and took her seat on the Senate throne.

Following the ceremony, Payette, her son and other dignitaries visited the National War Memorial where she placed flowers on the Tomb of the Unknown Soldier.